We have a unique treat never before done on FishDuck.com, or any other football site, as we learn what to look for in a Quarterback prospect for Oregon!  Forget the million details—what can a fan easily look for to see if a player can help us?  We are fortunate to have two specialists who teach young QBs as their profession helping us; and in the process I’ve learned some interesting points about our new QB commit Morgan Mahalak, and how to spot good quarterbacking.  This is an analysis different from any I have done before and hope that you love learning from it as I did.  We needed this a long time ago! (Charles Fischer)

“Morgan Mahalak is very similar to Marcus Mariota,” said Coach Will Hewlett. “I began working with Mahalak when he was a sophomore in high school and early on you could tell he was a great 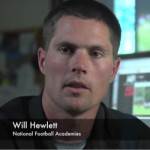 athlete, but a very raw prospect.  We had some mechanical issues to correct at first, starting with how he held the football.  He had an inconsistent grip which didn’t allow him to leverage the football and roll the football off his fingertips the correct way.  He made the change, and from that point on he progressed rapidly; much quicker than most high school quarterbacks.  He went from a raw athlete to the Elite 11 starting into his senior year.  He is now rated the #3 Dual QB in the nation by 24/7!

“I ran into Coach Mark Helfrich when he was still Offensive Coordinator.  I described Mahalak’s upside, and how I thought Mahalak would turn into one of the best QB prospects in the nation due to how much he had improved and yet how raw he still was.”  Hewlett went on, “One the things I love about Oregon, and I am not saying this because you are interviewing me, is how they are one of the best in the country at evaluation of talent and they don’t care what anybody else thinks.  They are very good at finding the guys that they feel will turn into superstars for their system and this is evidenced by how Mariota and Manziel were committed to the Ducks before they turned into household names.” “This is the pre-pass position,” Coach Hewlett points out above.  ”The carriage of the ball is in a relaxed, strong, pre-pass triangle closer to the shoulder, and with a slight bend in the knees which allows us to utilize as many muscle fibers as possible and explode outward into the throw.” “The first move of Mahalak’s is the drive of the lead leg and you can see the start of the ball movement.  When the lead leg hits we are already into the full throw.”  Hewlett goes on to point out, “The only negative on Mahalak, is that he drops the ball a little low here, but it is not a deal-breaker as we like to see it above the elbow line.” “From here (above) Morgan hits a perfect “L” position,” Coach Hewlett explains.  ”The ‘L’ position is where the acceleration starts with the elbow moving forward.  You see the legs are in a bent, loaded position (green arrow) and the lead arm is tight and tucked to the front-side of the body (red arrow).  He is completely vertical (orange line) with his upper body, which is critical for delivering an up-and-out throw and still being able to generate force with his turn and torque.” “You can start to see the elbow accelerate (above) and the transition as the body is square and the elbow leads the throw.  We call this the ‘Zero Position,’ a 45-degree angle at nose height. This is where Mahalak is ELITE, as his move to the Zero Position is smooth and fast.” Coach Hewlett then points out, “We have extension of the lead arm (above) and the turn and finish at the end to bleed out the rest of the power.  Overall, he has an extremely fast, quick throw.” 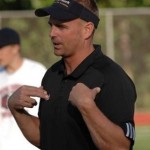 “Think of the body as a corkscrew building up energy and when the arm is in the zero position it benefits from all the kinetic force built up through the legs, the QBs core, with his arm being the end of a whip,” explains quarterback specialist JC Boice.  ”Since Morgan keeps his legs bent and drives the ground force up and through the kinetic chain within his body, he will be able to do that with a rusher in his face while other QBs who throw baseball style cannot.”

“In my opinion,” says Coach Hewlett, “Mahalak has a long way to go in reaching his peak, as he has a ton of upside.  He is still new to this process, and he has another summer and year of growth to experience.  He ran track this spring and is pretty lean, but with some work could put on ten pounds before fall and help his explosiveness.  The way he is throwing now, it is impressive as one of the best in the country in arm strength, velocity, and consistency.”  Coach Hewlett goes on, “His high school runs the Zone Read and Mahalak has superb speed at getting to the corner and I think there is a substantial difference between Mahalak right now, and other top QBs at the same time in their career.  He’s a good student in a school that has very high academic standards and was offered by Duke, which helps confirm his abilities in the classroom.” “Mahalak has one of the most fluid natural movements in terms of his release.  From the point where he separates the lead hand from the football to the point where the ball leaves the hand, it is one of the smoothest and fastest out there,” Hewlett marvels.  ”He does a great job of putting himself in a position for success.  For example, when he does a Zone Read to the left and he has to flip his hips back and throw the ball vertically down the seam,  Mahalak does a great job of elevating his elbow above the shoulder line and then driving the ball out toward the target with his extension.  He does a great job with down the field accuracy, really putting the ball on the money with a receiver moving away from him past 18-20 yards.  His vertical accuracy is where he separates himself from the other quarterbacks out there and he can throw a 65 yard long-ball if need be.”

“Something that Coach Helfrich looks for is how quickly the QB can get the ball out of his hands from the Shotgun to the Bubble Screens.  Mahalak flips his hips quickly and that ball is gone.  With or without the laces,” says Coach Hewlett.

I (Charles Fischer) wish to extend my great appreciation to Will Hewlett and JC Boice for helping me and the readers of FishDuck.com to learn a little about Quarterback Bio-Mechanics.  You must trust me when I say there is MUCH more than what I include in this report, but these are the base elements of throwing the football as shared by two Quarterback Coaches who are readers of this site and have been very generous with their time to help teach us all.  We are so fortunate to have so many friends in the coaching fraternity who donate their time and expertise. JC Boice has been involved with NFA for nearly a decade and serves as a National Lead Camp Coach. Born into a football family, Boice has played and now coached the QB position for the last 19 years.  Leveraging his complementary background in engineering and design, Boice has become one of NFA’s premier throwing mechanics teachers where he specializes in bio-mechanical throwing-motion analysis of quarterbacks.  JC Boice is a Managing Director and a driving force in NFA’s national branding and growth.

Will Hewlett has trained more than 50 Division 1 quarterbacks in the past several years, and has quickly become one of the most sought after experts on the quarterback position in the nation.  Hewlett is known for his focus on elite-level passing mechanics, helping quarterbacks improve speed of release, accuracy and ball flight.  As the Director of Player Development for the National Football Academies, Hewlett and the NFA conduct more than 70 youth development camps annually for youth and high school athletes.  In addition, Coach Hewlett is a top-ranked speaker at the Glazier Clinics tour, the largest football coaching clinics with over 26,000 active members and has been on staff at the Nike Elite 11 camp.

Do check our new Chip Kelly Update every Friday!