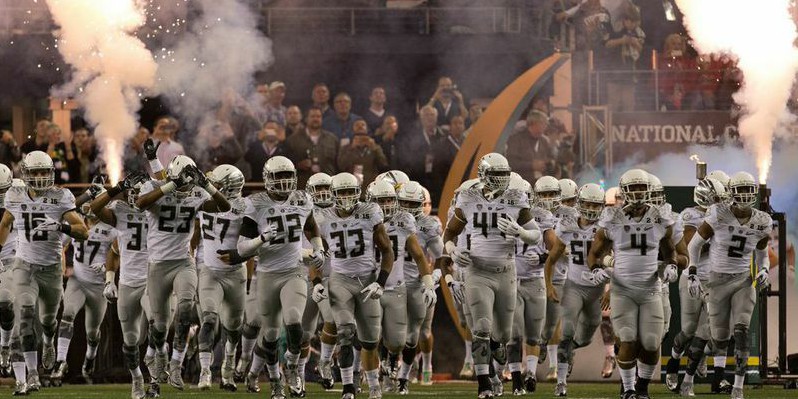 When Oregon underwent a radical Nike-designed uniform change beginning with the 1999 season, the message was clear: what you wear says something important about you. The Ducks, save for the occasional Rose Bowl every few decades, had never been a traditional powerhouse. Why not claim the future with innovative, constantly changing uniforms that symbolized a program on the rise? And sure enough, the team’s winning percentage in the last 16 years has been leaps and bounds ahead of the pre-’99 past.

Maybe it’s just the hangover of losing the national championship. When you win, you look good—and vice versa. But something about the power of Oregon’s uniforms and the overriding wisdom of what the team wears, and when, seems to falter in the title game.

When the Ducks’ kit, gray pants with white helmets and jerseys in silver trim, was unveiled after the Rose Bowl, speculation among Duck fans and the college football world at large was rampant right until kickoff: was it all a ruse? Maybe, the thinking went, Oregon and its Beaverton-based collaborators were going to pull a last-minute switch in favor of some greener, yellower combination. But then, on January 12th, with the sporting world’s biggest spotlight shining on the Ducks, the team ran onto the field in their white and gray unis, and we knew it was really true. There have been times when Oregon’s non-traditional accent colors, such black and either gray (for the pants) or silver (for jersey and helmet accents), have provided a worthwhile change-up. The mostly-black kit against USC on Halloween night in 2009 seemed to fuel both the victory and the sense of a changing of the guard at the top of the conference. The white jerseys with gray helmets and pants gave a low-key look to perhaps Oregon’s greatest moment, the completion of a 12-0 season against Oregon State in 2010. But for the most part, the bigger the game –particularly if it’s in postseason –the more school colors have seemed appropriate.

And thanks to a recent Wall Street Journal article, we know this sense of the appropriateness of school is more than a vague feeling. As Geoff Foster reports therein, the Ducks have a much better record when playing in green and yellow.

Going into this year’s national championship game, Oregon was only 15-4 in gray/silver pants since 2009 (now 15-5 with the Ohio State loss), compared to a 17-0 record in green pants and a 9-1 record in yellow pants. Although admittedly, the non-school color black pants elicited an 18-2 record, overall the record shows we’re more successful wearing green and yellow. Jerseys are a more complex metric, because the decision to wear colors or whites depends on whether the team is home or away. Still, the numbers are clear: green jerseys have netted a 26-1 record, while the team has gone 28-5 in white and 8-3 in black. Green or yellow helmets have given Oregon a combined 33-2 record compared to 14-3 in gray/silver and 9-2 in white. The Rose Bowl was one of Oregon’s successes in its main colors.

As much as Nike’s Oregon uniforms are associated with flash and style, at base the company is built on great design, be it of shoes or apparel. In the 1970s, the company’s iconic waffle-sole shoes practically invented running as a popular exercise in America. In the ’80s, Nike thumped the iconic basketball shoe of the past, the pancake-soled Converse All-Star, with shoes like Air Jordans that not only looked cool but performed better.

With that in mind, perhaps the most surprising thing about the decision to wear white helmets and jerseys with gray pants in the championship game was that Nike and the Ducks didn’t already seem to know the team’s record in every different helmet-jersey-pants combination. Or if they did, they flaunted the odds in a way possibly detrimental to the team.

Great design is usually born not of inspiration snatched out of the air but instead from rigorous research. Nike had to have known that different colors have a psychological effect. How could the men and women behind the vaunted Swoosh have had a blind spot this big? How could they have failed to looked at the results of different uniforms? Again, the only alternative to not knowing the different colors results is that we gambled against the clear numbers, and that’s not something anyone even wants to think about.

Even aside from color itself and the results of one tone versus another, Nike seems to have over-thought the issue of home and away uniforms for the championship game. Oregon was the first to have been the higher-ranked team in a championship game, but deliberately declined the privilege of wearing home uniforms? One can certainly understand how choosing away uniforms had a certain perverse psychology that would have been appealing: us against the world. The team’s identity today is about bucking tradition. Oregon has tried a variety of unique options, including these jerseys from 2011 against LSU

But after spending more than a century climbing to the rarefied air of college football’s powerhouse programs, Oregon and its fans deserved the chance to enjoy the subtle but unmistakable sense that the team in home colors is the favorite. Maybe it can be a motivating factor to cast yourself as the underdog, even when you are the higher-ranked team and the favorite. But for crying out loud: Oregon has hardly ever had the chance to enjoy the role of the incumbent power in a marquee postseason game. The Ducks likely would still have lost to Ohio State on January 12 wearing green and yellow, but wouldn’t it have been nice to have that little edge that comes with wearing the uniforms we wear at Autzen Stadium?

This is not to say that Oregon should drop Nike as its supplier. To even suggest such a thing is, of course, ridiculous. Nike and Oregon have a very special bond, one that’s not just financial but also about the team’s soul—its DNA. Without question, that should continue. At the same time, perhaps one small positive outcome of the championship game might be for the school and its Beaverton-based partner to sit down and re-evaluate their respective goals, here. Oregon is a very different program today than it was in 1999. That’s thanks in part to the uniforms. We’re not just an upstart looking for attention; we’re an iconic power of our time. But with that new role comes the need to present ourselves differently as well.

Let us keep sporting thousands of different uniform combinations. Let us incorporate non-school colors from time to time to keep things fresh and add possibilities. But in the most high-profile moments, let us embrace who we are: the players in the green and yellow, playing with style but not always favoring style and surprise for their own sake. Let us be Oregon and all that that means: not just a 21st Century innovator, but a program that embraces its roots.