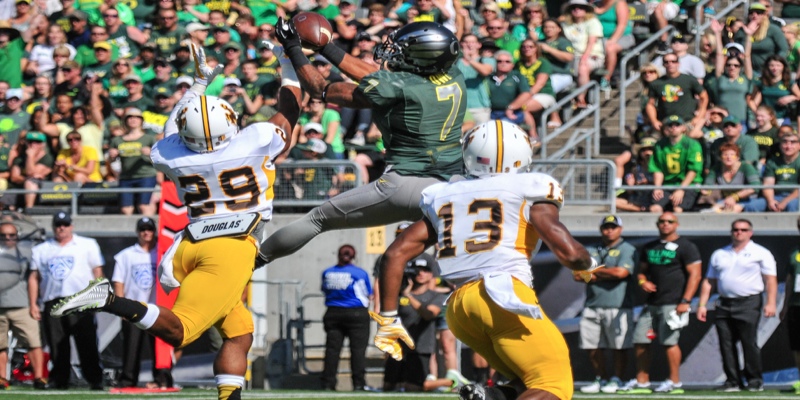 The quick passing game is a staple of the Oregon Duck offense, as its high percentage of success creates problems for opposing defenses. While the Ducks can attack a defense in many ways on any given down, they will often utilize the Stick concept in the short passing game for a much needed first down. This concept has been used by multiple college and professional football teams due to its proven results. Let’s take a look at how our beloved Ducks create their own success with this type of play calling.

As a general rule, the Ducks turn to this tactic when noticing keys within the defensive rotation and linebacker play. First we’ll examine the entire play, as it will give us a good understanding of how the Ducks like to attack the defense.

We see in the diagram above that the defense is aligned in a basic 4-3 coverage. The Ducks can run just about anything from any formation, giving it a transparency which makes them much more difficult to defend. In this play, the Ducks use a quick motion that draws the cornerback inside as No. 85 Pharaoh Brown runs a corner route, forcing the free safety and linebacker to defend the route in coverage.

No. 88 Dwayne Stanford uses the motion to create good spacing, and No. 24 Thomas Tyner runs the quick arrow to the flat area vacated by the corner. On the backside of the formation, No. 5 Devon Allen and No. 7 Keanon Lowe run quick slants in case the quarterback sees a shift in the defense and elects to throw backside.

The key on the right side of the field is to read how the cornerback is playing Stanford, and how the LB is playing Brown. Due to the amount of spacing, the coaches believe that if they use motion and the cornerback runs with the outside receiver, the flat will be open for an easy gain. The cornerback is aligned very tight to Stanford.

The photo above shows the cornerback in press coverage. This alerts the quarterback that the defender is probably in man, therefore he sends Stanford in motion. This call can also come from coaches in the booth as they observe how the defense is trying to stop the Ducks. The most important concept of the Stick concept is coverage recognition by the quarterback. As Stanford begins to motion (shown above), the corner runs with him. This confirms man-to-man coverage, and leaves the flat open. Tyner running an Arrow route to the flat.

If you notice from the picture above, Tyner is running the Arrow route to the flat. Because the corner is running with Stanford, he is walled off from covering Tyner. Stanford is forcing the cornerback up the field with the Stick route by running through the corner to a landmark on the field, threby creating more space for Tyner. From there, it is just pitch and catch for the quarterback and running back.

Re-cap of the Stick concept

Study the short video clip above to see the entire play in action. Notice the cornerback running with the Stanford, and Tyner running the Arrow route. The actual Stick route here is run by Stanford as it is designed to wall off the defender by working to a landmark on the field. The quarterback, who is reading the corner, will take a quick drop so he can release the ball quickly. As the flat opens up, he pulls the trigger and throws to Tyner. Although the pass is not completed, the Ducks will come back to this concept again, as coaches have recognized a weakness in the defense. The Stick Concept in a No-Back formation.

The Stick concept out of the No-Back formation

In this case, the Ducks are in a No-Back formation. This shows the defense a different look, but the Stick concept can be just as effective. As you notice from the arrows, both receivers are working to a landmark for their Stick route. It’s important that they work to a general area to force the linebackers to decide whom they are going to cover. The inside receiver will run the Arrow route as Tyner did in the example before. Spacing is the key for the success of this play.

Notice the spacing of Lowe and No. 87 Darren Carrington as they are also working to a landmark area. They will be physical in reaching their landmark, forcing the linebackers to either cover that area or jump the Arrow route run by No. 9 Byron Marshall. In this case the cornerback on that side takes several back-pedal steps, opening up the flat for a completion and good yardage to Marshall.

Take a look, above, at the short video of this play.

The Stick concept out of the Trips formation.

Let’s take one last look at yet another way the Ducks run the Stick concept. In the diagram, above, you will see all parts working in unison for a very successful play. In this case, the quarterback is reading the outside linebacker. The run fake is very important, as it forces five defenders to honor the running threat. Due to the 3-4 alignment from the defense, there are only two defenders that can stop this play: the corner and outside linebacker.

The outside linebacker attacks the quarterback at the snap. The quarterback then pulls the ball from Marshall, and throws the Arrow route to Lowe. As Carrington notices the movement of the linebacker, he works to the next level toward the free safety. Allen runs a fade route forcing the corner to run with him. This is essentially a clear out for the Arrow route to be wide open in the flat.

If you look at all the parts of this play, there is a great deal for the defense to think about. In addition, the ball was snapped with 23 seconds on the play clock, thus lessening recognition time considerably. The middle linebacker is forced to run with Lowe, which he is clearly out of position to do. Carrington does a great job reading the coverage, recognizing the blitzing linebacker, and changing his landmark from the outside linebacker to the safety.

While it is difficult to do at game speed, the Ducks are fabulous at reading defenses on the run. This is also a great testament of the coaches and their ability to prepare their players for game situations.

Like a game of chess, Oregon plays the game fast in its head. I have always enjoyed the unselfishness of each of these athletes in this offense, but each guy is still ready to make plays when his number is called.