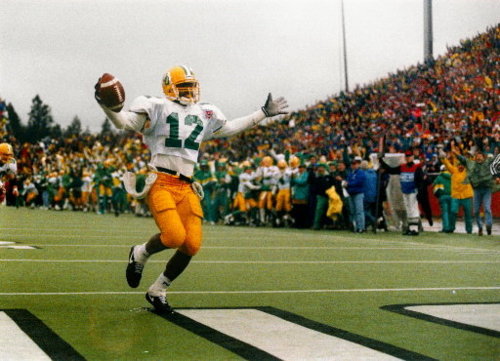 Duck Fans, I was honored to be able to sit down and talk with one of Oregon’s iconic legends of recent years, Dino Philyaw. Dino played running back from 92′-94′, and after some time in the NFL he is now back in Eugene, iconic in the community not for his football exploits but his cooking with his own catering company Philyaw’s Cookout & Catering.  Be it on the gridiron or behind the grill, in the state of Oregon Dino Philyaw is an elite talent.

Dino is a unique voice, a charter mentor for future generations of Ducks, a wise sage of football proficiency and life’s lessons.  He played in the 1995 Rose Bowl, a watershed day in Oregon’s program regardless of the outcome.  A gifted multi-sport athlete, he also played baseball.  His pro career included time spent with the New England Patriots, New Orleans Saints, Carolina Panthers, St. Louis Rams, and time spent in both the now defunct European League and XFL.

Now in the wake of Oregon’s first Rose Bowl victory since 1917 and a close observer of the Oregon program in its current state, I can think of no one I would rather speak with than Dino to gain his perspective.

– Jared –  “Seeing the Ducks win in the Rose bowl this past season, and being a former student-athlete who played such a vital role in Oregon’s run to the Rose Bowl in 1995, what was your emotions around the victory?”
-Dino – “Once you are a part of that fraternity you feel the team, you feel apart of it when they lose, when they win, and when they reach a milestone you really feel a part of that. So for us to win that Rose Bowl I felt like that was the bridge to get welcomed over as one of the elite college football programs.”

– Jared – “I know you’re pretty close to the team, and you’ve had a chance to see these guys practice a lot. With Darron Thomas leaving for the NFL there’s some pretty big shoes to fill, let’s say you are the new Head Coach at Oregon, based off of what you’ve seen who would you put as your starter?” 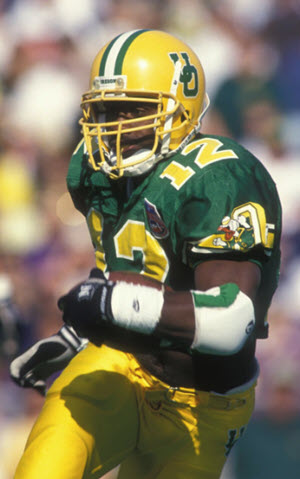 Dino Philyaw in the Rose Bowl.

-Dino – “Honestly, I’d let them compete for that position. That wouldn’t be my position to pick, I’d find out a lot about what each of those guys are made of, and ultimately a leader would present himself as the obvious choice.”

-Dino- “You know Jared, I’d have to say KB, Kenjon Barner. He’s always smiling, always has a great attitude, and he just presents himself as a class act all the way.”

-Jared- “Obviously a very small percentage of student athletes get to play in the pros, as somebody who spent time in the NFL what do you believe separates the ones that go to the pros, and those that were just college players?”

-Dino- “The difference is the guys that have that vision, the guys that will do what ever it takes, will put in the extra work, that wont take no for an answer.  The ones that are humble about the opportunity God gave them, the guys that just want their chance. Those are the guys that will have a better chance at making it into the NFL, when you get to the pros you gotta have will, desire, and passion; oh and be a really good athlete on top of that.”

-Jared- “So Dino, everyone talks about their favorite Dino moment, but what was yours?”

-Dino-  “At SC, the SC game in the 94′ season. We hadn’t won there in an extremely long time, it was my first 100 yard rushing game and it was really the true turning point for that 94′-95′ season. A lot of fans think UW was, but we had a lot of starters who didn’t make the trip, and for us to beat them at home when they had several first round draft picks on that team and were highly ranked, it was that tipping point in that season that really boosted our confidence and helped us gain momentum that carried us the rest of the way.”

-Jared- “You’re now living back in Eugene, now your perspective is a little bit different transitioning from a player to a mentor and fan. What do you believe are the most common misconceptions are about the program currently?”

-Jared- “You are an entrepreneur now, you own your own business. Incredible BBQ I might add, I can personally attest to that. How much of playing football has helped you in your career after football?”

-Dino-“Really what football was able to teach me a lot about was perseverance, how I can always push myself and get through things. Things aren’t always as easy as people might see, but I know by working hard I can make it through and succeed.

-Jared-  “So knowing now what you wish you would have known early in life, what is one pearl of wisdom you would love to go back and give to 18-year old freshman Dino Philyaw?” – Dino- “You, know……. I want to play the Rose Bowl one more time, man…. ”
(Side bar Duck Fans, there are somethings you truly can not capture through the medium of writing. One of those is tone, and passion behind a statement or response. I must admit, hearing the way Dino answered that last question, got me teared up and gave me chills down my spin. “The Rose Bowl…… One More Time”)

-Jared- “Well Dino thank you very much for taking time out of your evening to chat with me, is there anything else you’d like to add?”

-Dino- “Ya, you know with everything going on with Chip Kelly, I just want to remind everybody that coaches come and go, and I’m going to be a Duck regardless of who’s coaching. One thing we all have to realize is that this is OUR FAMILY,  and no matter what we gotta make sure our family stays, we gotta make sure we takes care of one another. These guys come and go and that’s just part of it, that’s all there is to it, it’s about opportunities. We gotta be proud of what he did while he was at Oregon, so don’t be upset, and realize if we had the same opportunity we would probably make the same choice. With that said, you know you gotta make your decision based off of the moment, not tomorrow not next week but right now.   Also how do you want to be remembered, if you want people to remember you in a great way make sure you leave a legacy people will never forget. Go Ducks!”

Duck Fans, I hope you enjoyed this interview with Duck’s legend Dino Philyaw, until next week Duck Fans, keep your heads held high, and remember as the great quote from the movie Mighty Ducks goes….