There are TWO promises I can count on from Oregon games these days. The first is Chip Kelly throwing one or two new strategies/plays into a game which makes our study of the evolving Oregon offense so satisfying.  The second promise is that one of the Consultants I turn to for help will come up with astute observations every time.  This time it was Josh Schlichter again who noted the ‘Tiny TE” strategy before I did, while the other components of Chip’s Game Plan will be covered in upcoming reports from the Grizzled Ole’ Coach, while Coach Goodbody in Colorado will offer some defensive expertise.  The analysis team at FishDuck.com is growing and we hope our input continues to help Oregon fans enjoy these wonderful beloved Ducks of ours!

We line up in the Triple Option formation above with the “Beast in the Backfield,” Colt Lyerla, lined up on the left side.  As you recall from prior reports we use him extensively for many purposes in this formation, even as a Running Back.

We have a “Cross-Buck” action taking place (above) as Barner is going left, and Lyerla is going right to smash #7 for Cal with his usual devastating block.  For many coaches a “Buck” is a Tight End in the shotgun, or lined up as a H-Back. What about when we run the TE one direction and the RB another?  It makes sense to call it the “Cross-Buck” action, as it gives our RBs more gaps to run to.  It is the same as having a Fullback in the backfield as discussed before.

Kenjon (above) steps over the remains of the collision between Colt and the Bear Outside Linebacker and moves into the secondary!  The Cross-Buck has been around at Oregon from as early as two years ago, but we’ve never had an explosion athlete like Lyerla lowering the boom like this.  It is a good strategy for his skills and our needs in our running game. 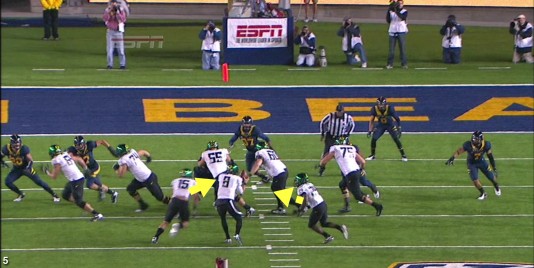 We are near the goal line (above) when we line up and begin again the “Cross-Buck” action with Colt going right and Kenjon going left. 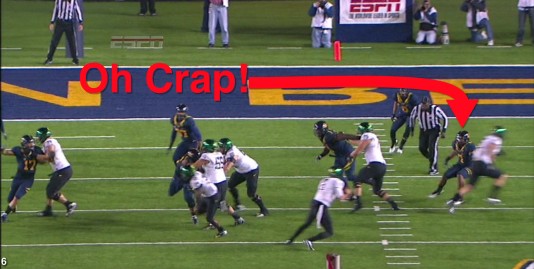 The Cal defender (above, #7 again) is bracing for another blasting block by Colt, when instead you see the white blur next to him racing past.  Lyerla is taking off on a pass pattern and the OLB knows he can’t possibly catch up after being caught flat-footed and is having an “Oh Crap” moment!  It is another example of how it is so hard to prepare for all the aspects of the Chip Kelly Offense.

Too late for Cal, as the defenders above cannot recover to stop the pass or make the tackle as Colt cruises into the end zone from a pass play variation of the “Cross-Buck” action in the backfield.  If you don’t come up to take on the block as a defender…then Colt will create a lane for the RB with your carcass.  Yet what if you come up hard to defeat the block and Lyerla runs past you?  You are in trouble, either way.  We love it!

Now what in the world is this?  We see Josh Huff lined up at TE above?  What is a little guy doing playing Tight End?  (Huff is taller than me but little by TE standards)  You see Colt over to the left of the formation as an H-Back, with a WR Stack formation at the top of the screen.  Huff went out for a flare pass from that spot, and I assumed that it was to take advantage of a LB covering him to create a match-up in our favor? Now we have flopped the formation with Lyerla as H-Back (above), the WR Stack (below), and the offensive linemen doing the kick-step classic Outside Zone Read blocking to the left. The Grizzled Ole’ Coach explained to me that when we don’t substitute players in, then neither can the defense — and what are they to do when the WR is flanked outside on one play and comes inside then next as a TE?  The defense cannot adjust to our change!  Who is that Tiny TE taking off?

We see (above) that we did a play action to the left with the OZR action, and Mariota is bootlegging to the right.  Lyerla has gone into a short pattern from his H-Back position.  Is that who Marcus is going to throw to?

The Tiny TE was Will Murphy (above), who is hauling in the pass from MM in this grainy screenshot.  What was amazing is the great throw on the run by Mariota that just led our WR perfectly to keep it from the defenders and make a long third down play!  Nice catch from our senior from Albany!  He may be small for the TE position, but he has been big with blocks downfield, and now with catching the ball.  He pulled in an acrobatic Touchdown later in the game.

I know it is getting routine to most of you, but I still marvel at the tweaks and the adjustments introduced in each game that make it impossible for the opposing team to prepare for.  Every week when I study the changes and I say to myself,  “I didn’t see that one coming!”  It’s evident that our conference foes feel the same way!