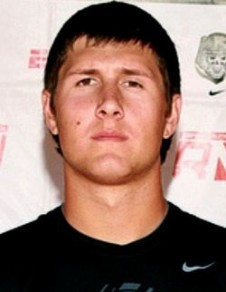 Oregon’s young and versatile tight end group just became younger now that 4-star John Mundt has signed his letter of intent.  He comes out of Modesto, California from Central Catholic High School where he just led his team to a Division IV state title.  Mundt initially verbally committed to Oregon last summer prior to his senior season.

First of all, he stands at 6’5″ and weighs 235 lbs.  That is an impressive size at most positions off of the line, nonetheless at tight end.  As a receiver, he is a more possession type of player with great hands and no fear.  Mundt is the kind of guy who’ll risk his body on a slant up the middle and come down with the ball 99% of the time.  And as a blocker, he is a very disciplined athlete who can serve just fine in our run offense.  Let’s assume he’ll put on a bit more weight and become much more stronger and powerful on the line.

There is a bit of a logjam at tight end at the moment (Lyerla, Baylis, Brown) so a redshirt freshman season may be in his near future.  However, tight end/special teams coach Tom Osborne feels like he can be a great asset on special teams with his size.  Fellow TE/LB recruit Danny Mattingly looks like he will come into Eugene primarily as a linebacker so don’t expect to see John taking snaps at linebacker.

I see his former Duck comparison as David Paulson; being a very reliable, disciplined, and composed tight end that’ll never let you down.

Here are his thoughts on Oregon and his high school postseason:

The sudden departure of ol’ Chip left many recruits with mixed emotions along with confusion.  It was unfortunate to see Dontre Wilson head to Ohio St, but it was very relieving to see such great recruits stick with our program and make 2013 one of the highest rated recruiting classes of the 2000s.  Here’s to Mark Helfrich, and here’s to the 2013 season.  It’s closer than you think…