Sunday, I read a tweet from the Register Guard‘s Rob Moseley about Mack Robinson, Oregon athlete and older brother of Jackie Robinson.  With the recent film about #42 and the interest it is generating, learning of an Oregon connection was a pleasant surprise.  I guess I’m late to the party on the Mack Robinson story, but I can’t imagine I am the only one:

Mack Robinson’s story is both inspirational and frustrating.

It is inspirational that an untrained community college athlete could attend the Olympic Trials in worn out spikes and earn a trip to the Berlin Olympics of 1936.  Narrowly losing down the stretch to none other than Jesse Owens.  The two symbolically slapping Hitler and the Nazi party in the face in what was supposed to be Germany’s world coming out party. Eighteen black athletes represented the United States in the 1936 Olympics, many of whom dominated the track and field events.  Praised by American journalists, their victories were hailed as a blow to the Nazi myth of Aryan supremacy.

Now for the frustrating: Following this shining moment in Berlin he would return home, attend the University of Oregon for the following two years, but according to his wife, Robinson would eventually leave school to support his family.  Robinson was reduced to pushing a broom, sweeping downtown streets while wearing his Olympic sweatshirt with a big “USA” on the front, unable to afford new clothes.  Racial conflict cost him that job, too. When a judge ordered the desegregation of public swimming pools in Pasadena, the city retaliated by firing all its black workers, including Robinson. Born Matthew MacKenzie Robinson; July 18, 1914 in Cairo, Georgia. He and his siblings were left fatherless at an early age, leaving their mother, Mallie Robinson, as the sole provider of the children.  She performed a variety of manual labor tasks eventually moving with her children to Pasadena, California.  Mack remained in town for school, and set national junior college records in the 100 meter, 200 meter, and long jump at Pasadena City College. 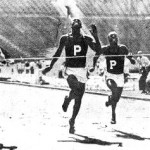 He placed second in the Western Regional Olympic Tryouts in 1936, earning himself a place on the United States Olympic team.  In the men’s 200 meters at the 1936 Summer Olympics in Berlin he finished just 0.4 seconds behind Jesse Owens.

Later in life, he was known for leading the fight against street crime in his home town of Pasadena. The Pasadena Robinson Memorial, dedicated to both Matthew and Jackie, was dedicated in 1997.  Jackie’s statue faces away from the city hall in an apparent snub to the powers that be, apparently he hadn’t gotten over how the city welcomed his older brother back from Berlin.  Another memorial statue of Jackie Robinson is located at the UCLA Bruins baseball team’s home “Jackie Robinson Stadium,” mainly due to the efforts of Jackie’s brother Mack. Several locations are named in honor of Matthew Robinson.  In addition to the Pasadena Robinson Memorial, the stadium of Pasadena City College was dedicated to him in 2000.  That same year, the United States Postal Service approved naming a new Pasadena post office, the Matthew ‘Mack’ Robinson Post Office Building.

Robinson died of complications from diabetes, kidney failure, and pneumonia in Pasadena, on March 12, 2000 at a hospital in Pasadena, California, at the age of 85.

A gifted athlete, he succeeded without help or favor.   A 1936 Los Angeles Times archive article describes how local business men were making a collection to fund travel of the Olympic athletes to Berlin. Inspirational, he chose to stay in Pasadena and work for positive change despite his indifferent reception.  Mack married Delano Robinson in 1955 and lived with her on MacDonald Street in Pasadena until his death in 2000.  He worked for the city of Los Angeles, and later as a truancy officer at Pasadena’s John Muir High School, all the while fighting Pasadena City Hall for better youth programs and facilities.  “Mack used to go to meetings morning, noon and night trying to get these young men off the street and give them something to do,” said Delano Robinson.

I’m proud to call him a fellow alumnus.

Michael (Editor) is a lifelong Duck fan. He grew up in Eugene attending Churchill High School and after four years in the Army he attended the University of Oregon majoring in Finance and Human Resource Management class of 1991. Following college, he received a commission in the United States Air Force where he rose to the rank of Lieutenant Colonel before retiring in 2011. He had assignments all over the world including twice to Germany, and three tours in the Middle East and as a young captain he spent three years as an Assistant Professor of Aerospace Studies AFROTC at Oregon State University. Mike is currently working as a consultant at the Space and Missile System Center in El Segundo California and living in Rancho Palos Verdes.