When considering Oregon men’s basketball, two things that come to mind are McArthur Court and Matthew Knight Arena.  Both buildings were architectural achievements in the eras they were built and McArthur Court was known as one of the loudest courts in the country for decades.

Comparing the two buildings reveals many differences, yet one common bond is the fans. Duck fans yell the loudest, drown out rival crowds and make buildings shake. 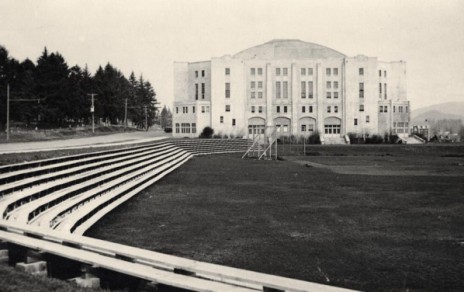 Construction for McArthur Court began in early 1926 and officially opened on January 14, 1927.  The Webfoots, as they were known at the time, beat Willamette University 38-10 in the inaugural game.  Until it was replaced by Matthew Knight Arena, it was the second oldest on-campus venue still in use.  Only Fordham University’s Rose Hill Gym in New York City, which opened in 1925, is older.

Mac Court, as it came to be known, was named after Clifton N. McArthur.  McArthur was a student-athlete, the U of O’s first student body president, first student director of athletics, and first editor of the student newspaper.  Following graduation he went on to serve as member of the Oregon Legislature, becoming speaker of the Oregon House, and later served as United States congressman.

Mac Court’s original capacity was 6000 seats, but over the years it grew to seat 9,087.  The arena was paid for by the Associated Students of the University of Oregon (ASUO), with a $15 fee assessed on the student body.  Mac Court was paid in full by 1932 and to celebrate the achievement, ASUO and the University held a public burning of the mortgage papers.

Mac Court’s unique structure has three balconies that sit very closely above the basketball court.  The proximity makes the Oregon crowd seem louder during a game.  The balconies vibrated with the full roar of the Oregon fans, often causing the nets to shake!  Adding to this effect are the maple-constructed floors, which bounce under the weight of the student section.  This unique flooring was also supposed to be easier on the knees of the players. 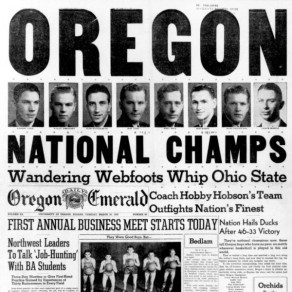 Many great teams and players graced the floors of Mac Court, but one of the earliest teams to taste success was the 1939 team known as the “Tall Firs.”  The team was coached by Oregon alum Howard Hobson, who was the third head coach of what would become the Oregon Ducks.

The Tall Firs were given their name by sports editor L.H Gregory, due of their lofty stature.  With great coaching and talent, the Webfoots won the inaugural NCAA Basketball Championship.

As the years went by and the university, enrollment and the fan base expanded, Mac Court underwent a number of renovations.  The first took place in 1937 when a new roof was constructed. In 1949 and the early 1950’s roll-away bleachers, the north end bleachers, and two balconies were added to the arena, which brought it to its present capacity.  It went through a final renovation in 1996 when the domed roof was reconstructed and the stuccoed exterior of the building was replaced.

Mac Court held over 1000 games before Matthew Knight Arena opened.  In that time it achieved several much-deserved distinctions.  Sports Illustrated listed it as one of the “12 toughest places to play” in the country in 1995. In 2001, the Sporting News named it the “best gym in America.”  It has also been favorably compared to Boston Garden.  Players, fans and opponents called it “The Pit” and spoke of it with respect, while visiting teams often mentioned the sheer volume of the crowd, saying that the noise rarely died down.

Bill Kintner, sports writer and arena research specialist, wrote in Colleghoops.net that he felt McArthur Court was one of the top five college basketball arenas in the nation.  He said Mac Court “is a building that will give you chills even if there is no game being played.” Even though Mac Court was officially retired from hosting games in 2011, it is still a place to be treasured and visited.  The long history contained within its walls is immeasurable. Many of the greatest collegiate players in basketball and volleyball have left their mark there.  Whether or not they overcame the Ducks and their amazing fans, they left the storied halls of Mac Court respecting the tradition and became a part of its history.

There is no place like Mac Court and it can never be replaced. However, when “The Pit” closed the Ducks did get a shiny new Matthew Knight Arena to play in.  At the time of its construction, it was the most expensive on-campus arena ever built. The arena is a unique showcase for Oregon athletics, and will hopefully carry on the Mac Court tradition of loud fans and shaking stands for decades to come.