As we continue to trudge through the long wait before the start of football season, we’ll  look at some of the best returning talent at key positions in the Pac-12 — one of those positions is tight end.  At the close of last season, the conference lost some top talent at the position to the NFL such as Austin Seferian-Jenkins’ and Chris Coyle, but there is some talent returning.  Some teams are starting with no experienced tight ends, but signed highly-ranked recruits that may prove to be the conference’s future top talent.

The Buffs do not have a ton of experience at the position and senior Kyle Slavin sits atop the depth chart after catching nine passes for 68 yards and a touchdown in 2013, starting all 12 games.  Sophomore Sean Irwin played all 12 games in 2013 as well, and did not make much of an impact as a true freshman.  The third Colorado TE is Connor Center, who redshirted last season  with the Buffs — but who displays promise despite not playing football in high school.

What makes the Buff’s tight end position interesting is that head coach Mike MacIntyre’s offense has produced some great tight ends.  In his last year at San Jose State, he had a tight end with 47 receptions for 742 yards and four touchdowns.  It’ll be interesting to see how the tight end position plays out in Macintyre’s second year at Colorado.

Utah lost both of its starting tight ends to the NFL in Jake Murphy and Anthony Denham — and were the only team in the country to send two TEs to the NFL.  The Ute’s most likely starter is Sophomore Siale Fakailoatonga, who was Murphy’s main backup last year — he had two receptions for 18 yards.  With a lot more playing time and Year 2 in the program, his numbers should improve vastly.  His competition for playing time will likely come from Harrison Handley, who redshirted last year and seems to be in great shape for the upcoming season.

The Beavers have a duo of star tight ends returning in senior Connor Hamlett and junior Caleb Smith, giving them the best tight end tandem in the conference, and maybe in the country.  Hamlett had 40 receptions for 364 and five touchdowns, while Smith had 25 catches for 343 yards and four touchdowns.  They both played a part of OSU’s six-game win streak in the middle of the season and will help the Beavers’ offense be strong again in 2014. These two players don’t really need an introduction to Duck fans.  Each played integral parts of the Duck’s success in 2013 and are almost guaranteed to do the same in 2014.  Pharoah Brown started five games for the Ducks last year year and had 10 receptions for 123 yards and two touchdowns.  He connected with Mariota for a 12-yard touchdown with 2:12 left in the fourth quarter against Stanford to bring the score to 20-26, giving fans slight hope of overtime and an Oregon win.  Brown also had a one-yard touchdown in Oregon’s loss to Arizona — one of only two Oregon touchdowns during that game. 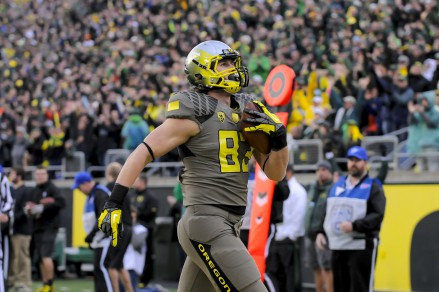 Johnny Mundt in one of his many impressive performances.

Johnny Mundt burst onto the scene in Oregon’s third game of the season against Tennessee netting 121 yards and two touchdowns on only five receptions.  No one expected a true freshmen to step onto the field for his first collegiate start and truly own it.  By stepping up so quickly, he gave Oregon another weapon and defense coordinators around the conference another headache.

Mundt ended the season with 16 catches for 281 yards and three touchdowns.  He will likely be a huge factor in the Oregon offense next season, and we can only imagine how much we still have to see from this young star-in-the-making.

Stanford didn’t have an impressive tight end in the 2013 season but seems to have addressed that by signing the No.1-rated tight end recruit in the 2014 class in Dalton Schultz.  It remains to be seen if Schultz can work his way into the starting line up for the Cardinal.

The Trojans surprisingly lost TE Xavier Grimble early to the NFL, leaving USC with only two untested scholarship tight ends from the 2013 season.  They signed Bryce Dixon, one of the top tight end recruits in the country, but because he didn’t enroll early, his learning curve will be steep.  The Trojans need Dixon to pick things up quickly to provide some desperately needed depth at the position.

Though the league lost a lot of talent to the NFL, it’s doubtful that the conference will suffer.  These players and those that will burst onto the scene will fill the shoes left behind, and perhaps even exceed the production of their predecessors.