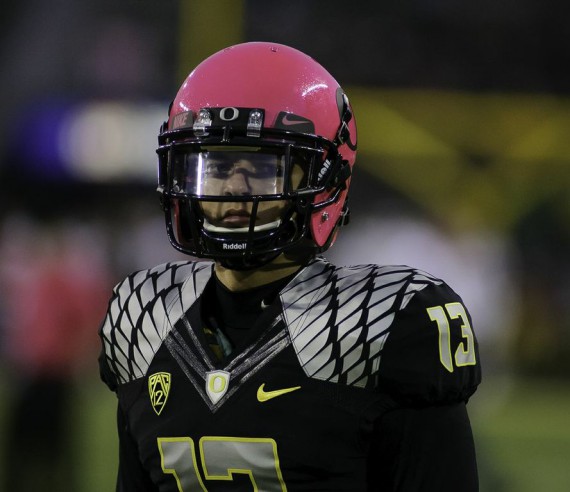 I don’t know what it’s like to be a redshirt freshman on the football team, but I imagine it’s a peculiar situation.  You work so hard throughout high school to become the best player you can, and the fruits of your labor are rewarded by multiple scholarship offers from schools across the country.  In your senior year, you’re the big man on campus and you get interviewed by the local newspaper, you see articles about yourself on recruitment websites, and it all culminates when you sign your letter of intent to play college football.

You arrive on campus with your fellow commits (and new friends), you are the toast of the town, you and your class are the next generation of players that will take your program to new heights.  It must be a whirlwind.  But then, things slow down a bit as it becomes clear that all those dreams are going to be delayed; you’re going to be a redshirt. As the season comes along, you’ve gone from being your previous team’s most valuable player, to a nameless scout player, helping the starters prepare for the upcoming week by learning a different scheme for every game.  Everyone dreams of being an instant impact player as a true freshman, a la De’Anthony Thomas or Thomas Tyner, but a good chunk of players across the country redshirt their first year on campus.

In fact, a whopping 74 members of the current Oregon football team have redshirted, and that group includes Oregon mainstays such as Marcus Mariota, Hroniss Granu, and Tony Washington.  This previous football season, only six true freshman saw the field, with 20 others redshirting.

The reasons for redshirting vary, but generally a player waits in line when the coaching staff feels the player could use a year of development to truly contribute at the college level.  However, this Oregon team saw some freshmen with the talent to contribute right away, they just happened to play crowded positions.

With the recruiting cycle garnering more and more attention every year, it seems as if interest has already shifted towards the incoming class of freshmen, and we’ve forgotten about the guys who were being hyped up to the same degree just 12 months ago.  With this piece, we’ll highlight a few players you might have forgotten about, but whose names you might be hearing frequently on Saturdays this fall.

These two receivers, both 4-star recruits according to Rivals.com, redshirted their freshman year due to the many seasoned veterans ahead of them on the depth chart.  However, Civil War hero Josh Huff has graduated from the program, and is taking his 12 touchdowns and 1140 receiving yards from last season with him.  Bralon Addison enjoyed a breakout season as the No. 2 receiver option last season.  Together they formed quite a formidable twosome, combining for 19 touchdowns.

A true third option at receiver, though, never truly materialized.  With Addison assuming the mantle of the go-to guy this upcoming season, many predict Keanon Lowe will become that No. 2 option.  However, Lowe has always been most effective as a “possession receiver” and blocker, as he only has six touchdowns for his career with only his senior season left to play.  He is a respected team leader, and certainly upholds the “Men of Oregon” mantra the program so highly covets.  But the effectiveness in the passing game just wasn’t there.  With that being said, there’s a definite opening to become Marcus Mariota’s second option in the passing game.

While true freshman Jalen Brown has made some waves by moving to Eugene early and enrolling in school, fellow Phoenix-native Devon Allen could be the one turning heads as early as the spring game.  Allen, listed at 6 feet tall and almost 200 pounds, possesses the size to catch many passes this season, however it is his speed that has me excited.  Allen is currently running track for the University, and as a prep star, set Arizona state records in the 110- and 300-meter hurdles.  Running for a world-class college program will only help him develop his speed, which is an exciting thought for Duck fans.

Oregon’s offense has enjoyed success in quick screen passes, and even the occasional receiver option run, and that is somewhere Allen could instantly contribute.  While the jury is still out whether or not he will be a true deep-ball threat, look for the coaches to ease him into college ball with a few quick passes his way, especially if the Ducks get out to big leads against some lesser opponents.

Another redshirt freshman receiver to look out for is Darren Carrington.  A San Diego native, the 6’2, 195-lb. Carrington put up very impressive numbers in high school, as well, and if you watch some of his highlight tapes online I’m sure you’ll be pumped too. While not a member of the track and field program, Carrington has surely benefitted from a full season of practice, and by the time the season rolls around, he’ll have a full offseason training regimen under his belt.

In fact, in Rob Moseley’s write ups throughout last season, Carrington was mentioned multiple times as someone who was impressive as a member of the scout team.

He has the height to move outside, but similar to Allen, I wouldn’t be surprised if we see Carrington running slant routes and screens early in the season to see how his year of prep has benefitted him.

On the defensive side of the ball, much has been made about the graduations of Avery Patterson and Brian Jackson, as well as Terrance Mitchell forgoing his senior season to enter the NFL draft.  While these departures certainly hurt the Ducks, they caught a big break when their second-leading tackler and lockdown corner, Ifo Ekpre-Olomu, decided to spurn the draft and come back for his senior year, where he has a legitimate claim as the best cornerback in the country.

If you were to look at the defensive backs as a whole unit, you could say they are a bit similar to the receivers.  Ekpre-Olomu is clearly the best of the group – as Addison is of the receivers – and he is Oregon’s best player on the defensive side of the ball.  If you go back and watch last year’s incredible clash against Oregon State, Ekpre-Olomu was at the peak of his game, accumulating an incredible 12 tackles and had an interception in the end zone.

That being said, opposing offenses are going to look to challenge Oregon’s other defensive backs, and this is where a second playmaker must arise.  Luckily, the defensive backs return players that are a bit more experienced than the receivers, as players such as Troy Hill, Erick Dargan and Dior Mathis have played many snaps heading into this season.  With the Oregon fan base excited over the commitment of Mattrel McGraw, the 4-star safety out of Louisiana, Tyree Robinson is whom I expect to make plays and become one of the notable underclassmen playing defense for the Ducks. Tyree committed as a package deal with his twin brother Tyrell, who plays linebacker.  While Tyrell saw the field last season, primarily on the special teams unit, as a true freshman, Tyree redshirted and has patiently waited to get his college career started. Listed at 6’4″, Robinson shows impressive size as a safety, and was a heralded recruit from Lincoln High School in San Diego, California.

While the two brothers were committed to play both football and basketball for the Ducks, they ended up not joining the basketball program and seem to be focusing 100 percent on football, and that will certainly help Tyree come this fall.

With Oregon’s early season games against the likes of South Dakota and Wyoming, look for Robinson to get plenty of reps early on, whether his amount of quality reps improves or not, will depend on his  early play.

The Ducks have enjoyed success at safety these past few seasons, with players such as T.J. Ward, John Boyett and Avery Patterson displaying remarkable ability, and it’s up to someone to step up and carry the torch.  Tyree could be that perfect blend of size and speed to be the ball-hawk type of safety that Oregon loves to utilize, and if he plays well, don’t be surprised if he works his way up into the starting lineup.  Given how often Oregon likes to rotate its players, he’s the one guy I’ll be looking for come September.

After analyzing both the receivers and the defensive backs, the similarities are quite interesting.  Both sets bring back a seasoned veteran that is crucial to the team’s success, and a collection of other players with various levels of productivity.  If someone were to start shining through, the opportunity for extended playing time is knocking.

The coaching staff has shown that if you produce, you’ll play, regardless of your experience level.  With the rabid attention that recruitment gets every year, fans tend to look ahead too much and not focus on what is right in front of them.  While the players that committed to Oregon for this upcoming season are certainly appealing, let’s not forget the guys who have been waiting for their time to shine.