Anytime you go on the road in the highly competitive Pac-12, it is essential to bring your A-game.  Oregon’s (19-8, 6-3 Pac-12) baseball team won it’s first six non-conference road games of the season with series sweeps over Hawaii and Loyola Marymount, but they have recently dropped three of their last five games away, including two conference losses to Stanford.

As a result, the Ducks have dropped two spots to No. 10 in the nation, according to The USA Today Top 25 Coaches Poll on ESPN, and are now tied for second in the Pac-12 standings.

The road doesn’t get any easier from here, with another midweek series at Gonzaga, April 1-2, before they head for Seattle to play the conference leading No. 22 Washington Huskies (20-5, 8-1 Pac-12), who have won 10 straight games and will have a week to prepare for the matchup against the Ducks in the new Husky Ballpark.

Oregon and head Coach George Horton have taken a similar approach to games this year; led by dominant pitching, complemented by situational hitting and small-ball offensively.

For the most part, the Duck’s pitching has been dominant in recent years, chalking up a 2.84 earned run average, good for the third lowest among Pac-12 pitching staffs, behind No. 17 UCLA and No. 6 Oregon State.  The staff also boasts the lowest opposing batting average at .206.

Seems like they’re on the right track right but there are underlying holes that have yet to be filled.

One evident drawback for Oregon is the depth coming out of the bullpen.  With ace Cole Irvin going down with an injury earlier this year, Jeff Gold has taken the role of the Sunday starter in the Ducks starting rotation, alongside southpaws sophomore Tommy Thorpe and freshman Matt Krook. 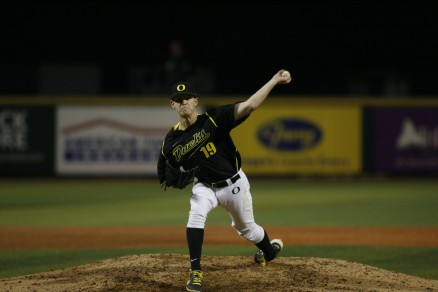 Cole Irvin was dominant against the Huskies last year.

Last season, Gold made 13 appearances on the mound, with only five as a starter and has surpassed that mark this season with already seven games started on the hill.

Although he has been the most efficient out of the rotation — recording seven wins in seven starts with a 2.15 ERA — the bullpen is left without the depth and diversity it used as an advantage last season.

Junior Jake Reed, who has moved to the bullpen after starting the most games for the Ducks on the mound last season, would have been a perfect arm to fill the slot Gold left but he has been needed to fill the closing role after the departure of All-American Jimmy Sherfy.

Oregon’s pitching staff will have to be excellent against Washington, who is the second best hitting team in the Pac-12 with a .298 team batting average and the highest slugging percentage of .422.

The Huskies’ recent success has exploded off the bat of senior Brian Wolfe, who took home the honors for Pac-12 Player of the Week for the second week in a row.  His performance — going 7-12 (.583), a home-run, double, six runs and 10 runs batted in — led the team to a 7-1 win over Gonzaga and a three-game sweep over USC.

Offensively the Ducks should fair just fine, as the Huskies staff allows more than three runs per game with a 3.29 ERA.  They also don’t strike out very many hitters, which is a good sign for the Oregon batters, who have struck out more than any other team in the Pac.

The No. 3 Oregon softball team recorded a sweep over Washington in their series last weekend in Eugene.  Let’s hope some of that diamond magic will propel the baseball team to a series win against the Huskies.