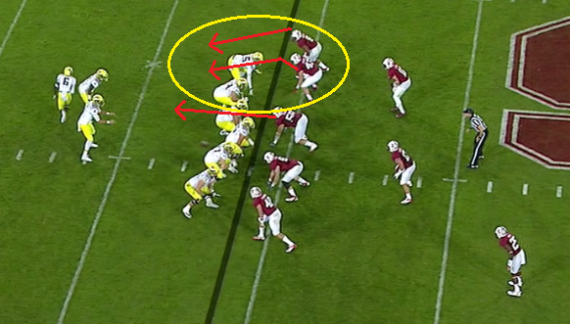 Watching Stanford take on Oregon recently has been brutal for Duck fans, but interesting for coaches, specifically on passing downs as Stanford’s three and four man pass rush really caused Oregon problems. Stanford does a terrific job of making things look much more complex than they actually are for offenses, as we’ll examine. Against Oregon, Stanford targets the Ducks’ offensive line by faking blitzes, thus attacking Oregon’s pass protection rules and getting favorable one-on-one match-ups.

Let’s breakdown some of the ways Stanford attacked Oregon’s pass protection by checking a few examples and considering the solutions.

Showing Pressure Inside and Winning on the Edge

Stanford causes mayhem for Oregon with a simple 3 man pass rush in this “sugar” look. What is a sugar look? Basically it means that they’re going to show that a linebacker is blitzing. Whether he does or doesn’t remains to be seen to the offense.

Taking a look at the image above, we see that the Cardinal is showing pressure with just one linebacker. Essentially, they’re showing a 4 man pass rush and Oregon has, hypothetically, 6 offensive players to pick this stunt up if you include the running back.

Notice the Pressure From the Defensive End on the Left

Looking at the play in action, we see that Stanford flushes the QB out of the pocket with just a 3 man rush. How exactly does this happen? Is it bad execution? Nope, there’s a lot more to it.

Notice the feet of the guard and center.

Check out the pre-snap look again above, and you’ll see a highlight on the feet of the guards. Check out the animated play again. You’ll see that both guards step inside.  This is because the Mike (Middle Linebacker) is showing a blitz to the right of the center, likely in the “A” gap, which is between the center and guard. When the linebacker doesn’t blitz, for the first second and a half of the play, there are three blockers dedicated to just one defender, the nose tackle.

The threat of the blitz makes the left guard, no. 54, step inside to help take the nose tackle. You might be thinking at this point that the defensive end made the play, so why does this all matter? The offensive tackle, no. 64, has to be ready to take the inside pass rush, because he doesn’t have help to the guard inside of him. So the tackle’s “mental weight” is protecting the inside area, meaning he can’t sell out to stop the speed rush on the outside, allowing the defensive end to easily knock down no. 64’s hands and flush the QB out of the pocket.

This is an easy little sugar look by Stanford to attack man protection. With this sugar look, they maximize the efficiency of a three man pass rush while dropping a near maximum amount of defenders into coverage. Even if they don’t get a sack, they increase the likelihood that Oregon will throw an errant pass.

Even with the sugar stunt, Stanford couldn’t survive the whole game with a three man pass rush. So another tactic they used was an overloaded pass rush stunt. Again, they attacked the same position, the left tackle. Examining the pre-snap look above, the Cardinal show a 3-4 front, with the quick five man balanced pass rush look. This affects the pass protection as well. The Duck center and QB are expecting a few specific stunts and pass rushes from Stanford, thus they set their pass protection rules and responsibilities accordingly. The main pass rush against Oregon comes on the  left side of the offensive line.

The Cardinal does something different, as instead of giving that pass rush, Stanford brings two pass rushers off Oregon’s left edge, as illustrated above. They also bring the nose directly into the left guard, along with one pass rusher to the offense’s right.

As shown in the clip above, Oregon’s left tackle is in a difficult spot. The offensive tackle locks on the outside rusher, allowing the inside defensive linemen, who was slightly delayed, to go between the offensive tackle and the offensive guard. Notice how Oregon’s protection “slid” to the right. They essentially had three blockers on one defender again!

While Mariota scrambles for a one yard gain, this again squanders another opportunity for Oregon.  He has no outlet pass to throw because Stanford has so many people in coverage. While this looks like a blitz, it’s just a standard four man pass rush. This means there’s plenty of zone droppers on Stanford’s side of the ball with eyes on Mariota, ready to jump a rushed pass.

Oregon ran a lot of play action or pump fakes in this game. In my opinion, they should have tried to utilize the quick passing game a little bit better. I’m not talking about plays where the QB has a run option either or has to make a decision pre-snap. Just get the ball out quick and eliminate thinking that slows down the play.

Oregon will benefit this upcoming year from returning an experienced offensive line while Stanford loses some key personnel.  We can assume that offensive line coach Steve Greatwood will have this group practicing extensively to counter these defensive strategies since Oregon will see this often in the upcoming season. Opposing coaches will implement a strategy against Oregon until the Ducks prove they can stop it. I also assume that Oregon will modify its pass protection schemes to try to prevent three-on-one match-ups from happening.

It also didn’t help that Oregon couldn’t run the ball effectively. When a team gets a lot of three and four man pressure looks, it needs to be able to run the ball, even if this is attacking perhaps Stanford’s best strength. It’s not impossible by any means, and the Ducks are a terrific running team, so they should not be intimidated.

If you enjoyed this article attacking pass protection, I’ve got another article on defensive line stunts against the pass. Also, check out these links if you’re interested in learning more about football defensive strategy or offensive line principles. You can also follow me on Twitter using my handle @CoachCP

I may be in Indiana, but “Oh, how we love to learn about your beloved Ducks!”