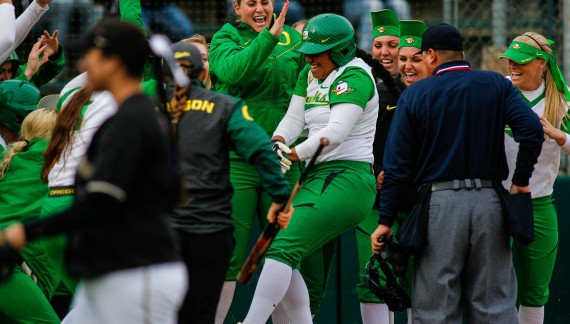 Welcome to the club, Oregon softball!

With former Oregon football player Robert Sanders‘ $10 million contribution to a new softball stadium this past week, the team joined the union of University of Oregon sports that have been christened with a new building to call home.

In just the past five seasons, three of the four major sports (baseball, football, and basketball) have received shiny new facilities of some kind. As a result, each program has seen a major increase in the number of 4- and 5-star recruits.

Even sports that have been not the most highly-covered of media events, have reaped the benefits of the new facilities. In each season since Matthew Knight Arena opened its doors, Oregon’s Acrobatics and Tumbling squad has won a national championship. Just last season, women’s volleyball made an appearance in the Final Four, where it fell to Texas. Coach Mike White and his players will have plenty to celebrate in the coming seasons.

Even considering the achievements of other nationally recognized Oregon programs, however, the new stadium will place softball in one of the best positions to succeed in the foreseeable future.

They will lag behind only the Duck women’s Track and Field and Cross Country programs, whose histories and national prominence always has and always will make them national forces.

Though football remains the most visible sport in Eugene, it is certainly plausible to see the softball team win more national championships in future decades.

Softball’s current position in the hierarchy of Oregon sports is unique in that its new stadium was conceived in reaction to its success, rather than as an attempt to lift the program into national contention.

About 16 years ago, the University unveiled the west coast’s first indoor collegiate practice football facilty – the Moshofsky Center. One Joey Harrington-era, national championship appearance, and Rose Bowl victory later, the squad opened a $68 million Football Operations Center — the Hatfield-Dowlin Complex — that has likely cemented the program’s national reputation for years to come. Oregon is hoping that the creation of PK Park and The Matt will have the same effect on the baseball and basketball teams.

Softball, however, will utilize the new stadium as another major tool that will prolong the success of a program that has already established itself as a national power.

As the team sat atop the national rankings for the final two months of the season prior to being ousted by Florida in the Women’s College World Series, the Ducks made an appearance in a super regional for the fifth consecutive season, as well as its second WCWS appearance in three seasons.

Furthermore, while these other sports depended on these new structures to boost recruitIng efforts, the softball Lady Ducks were able to haul in some of the top players in the country.

2012 High School All-American Cheridan Hawkins became the key to Oregon’s pitching staff as soon as she stepped into the Howe Field circle, posting sub-two ERAs in each of her first two seasons. This past fall, Oregon landed the top recruit in the country in 3B/utility player Jenna Lilley, as well as the 16th-ranked prospect, C/1B Gwen Svekis. Cheridan Hawkins was one of multiple top recruits who committed to Oregon before the announcement of the new stadium.

These incoming freshmen, both from the east coast, committed to play their college years at Howe Field — as is. It says something about a program that two of the nation’s top freshmen would move across the country to play at a 1,400-seat, 78-year-old field that sits adjacent to the basketball team’s former arena, in front of a graveyard, and lurking in the shadows of hallowed Hayward Field.

The recruits who committed to Oregon with no knowledge of the new stadium plans must feel like investors in Apple Inc. at the turn of the [21st] century. Just think of how many other recruits will follow in their footsteps — to both a top-notch program and a premiere venue.

The creation of the new stadium will place Oregon on the precipice of a softball dynasty, as even more top recruits, as well as an expanding fan base, will flock to Eugene in the coming years.

Oregon softball has not only joined the club of top Duck sports, it has become one of its leaders.