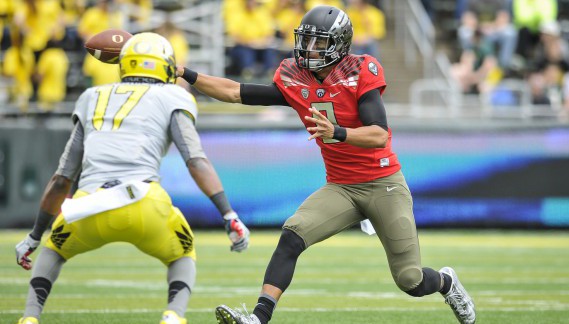 Juwaan Williams is a long way from home. Almost 3,000 miles away to be semi-exact. However, the distance hasn’t stopped him from making a big impression — on the Ducks.

Williams hails from Tucker, Georgia, an unincorporated community in the northern part of the state. There, he attended the aptly named Tucker High School and became a star athlete. The three-star recruit took advantage of his time on the field, learning to play multiple positions. Through his sophomore year he excelled starting as safety and wide receiver. During his junior and senior years, Williams focused his efforts on quarterback and defensive secondary. To put this in perspective, in only three years of high school, Williams managed to dominate the field in four different positions. And that’s just for starters.

As a dual-threat quarterback, Williams led the Tucker Tigers to a state championship victory as a junior with a pristine 15-0 record. He passed for 558 yards on 28 attempts with seven touchdowns. In addition, he put 13 tackles and three interceptions on the books, earning him an invitation to participate in the Rising Senior Bowl.

Williams completed 50 percent of passes his senior year for 703 yards and eight touchdowns and carried the ball 103 times for 752 yards and 11 scores. He was named First-Team All-DeKalb County and All-Region for his stellar contributions to offense. The Tucker Tigers were unable to repeat the state championship win of the previous year, falling in the quarterfinals after compiling 10-3 year and a second place finish. These statistics earned Williams a quarterback selection to the East-West and Georgia-Florida All-Star games. After an impressive, multitasking high school career, Williams sported 38 touchdowns and 1,569 yards rushing.

Williams was recruited by the Duck’s assistant coach, John Neal — committing to Neal Jan. 28th, 2013. Other offers Williams received included Notre Dame, Vanderbilt, FSU and Ole Miss. Instead of staying near home and joining an SEC team, Williams decided to journey almost 3,000 miles for an opportunity to play for the Ducks — a move that shows massive dedication and commitment to football and the team. He chose Oregon because he wanted to play somewhere that would spread the ball out, though he knew by signing his letter of intent, his position on the field wasn’t set in stone. Where most players are listed as “wide receiver” or “quarterback,” Williams was labeled as an ”athlete.” It isn’t a position you see very often, because most players have a specific spot they spend their majority of playing time. But because Williams was so versatile during his high school years, he earned the all-around designation.

To give a better understanding of this listing, Richard Sherman is probably the most famous “ATH” of college football. During his high school career, Sherman played wide receiver, punter and defensive back before being recruited by Stanford. Now he is arguably one of the greatest players active in the NFL and led the Seahawks to the most recent Superbowl win.

Juwaan’s coach Franklin Stephens did have some worries regarding his “athlete” status. He informed Jordan Whitley of Comcast Sportsnet that his versatility is the reason the Ducks took notice, but it has also hurt him in a way, because his role is so up in the air. That noted, each school he received offers from recruited him for different positions.

Williams’ ultimate desire is to become a receiver so he can make impact plays with Mariota. Though concerns may have existed, Williams has a great opportunity at Oregon to become an significant player whatever he ends up doing. Currently, he is a defensive back on the roster, but his dream of being a receiver is still very much alive. Since he redshirted his freshman year, Williams still has potentially four more years to get his shot.

Until then, Williams has voiced he would be more than happy playing any position — anything to help the Ducks get back to the National Championship Game. In 58 more days we will see whether or not Williams’ dream of being a receiver for the Ducks comes true. However it plays out, he should get to see a lot more play time after leading the Ducks for tackles during the spring game. He’s sure to make an impression for the 2014-2015 season.