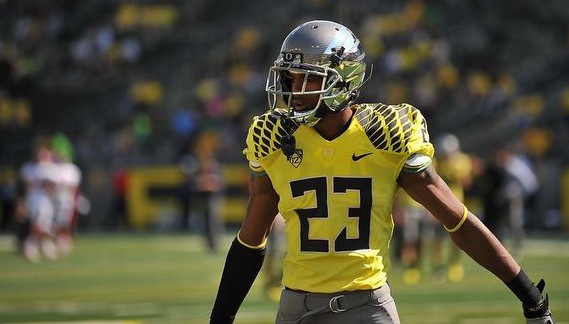 When a new class of freshmen arrives to a football program, it’s always a mixed bag. Players of all positions gather from different high schools or junior colleges, states and backgrounds, to come together as teammates. Some are prized recruits coming in from premier high school programs; some are lesser-known players that the coaches hope are diamonds in the rough. But they do have a few things in common, namely, a blank slate at the collegiate level. Another common trait is that they are all expected to contribute to the program, although their roles will be determined as the years progress.

For three players on the offensive side of the ball, the time for them to become contributing key players for the Oregon Ducks is either this season or never. Dwayne Stanford, Chance Allen and B.J. Kelley, all receivers, came into the program with lofty expectations. Stanford brought a blend of size and speed that would balance well with the smaller, quicker receivers Oregon had, while Kelley and Allen were regarded for their flat-out speed, something that is always in demand.

However, for various reasons, they have yet to make an impact in the offense, and if they don’t make one this season, they might not get a chance. Kelly, a junior, has the most touchdowns among them — with three. Allen and Stanford, both sophomores, have only 16 catches between them. This offseason, the pressure on these three has only intensified, with star receiver Bralon Addison losing this year to a torn ACL, and incoming new receivers already turning heads and building excitement, despite having not played a down of college football. Dwayne Stanford has the ideal size for a receiver.

Because these three players are in limbo within the Oregon offense, they deserve a shot at getting first-team reps when practices start getting into full swing. But the next wave of talent is already chomping at their feet, desperate for the playing time that Stanford and Allen are already vying for.

That new wave of talent includes freshman Jalen Brown, who enrolled in college early and has already impressed his coaching staff, with receivers coach Matt Lubick describing him as “smart” and “promising.” Accompanying Brown is also the pairing of redshirt freshman Darren Carrington and Devon Allen. Carrington is a highly-touted receiver who looked impressive in the spring game, despite playing with a cast on his hand, and Allen is a player whose popularity seemingly grows by the day with every track meet — and his wins. During the offseason, Devon Allen has won awards and fans.

College football, not just at Oregon but anywhere, can be a tough reality check for young men. It doesn’t matter who you are: If the team is producing without you, they’re not going to try to mix things up and get you involved. The trio of older Duck receivers could cede playing time to their younger counterparts before they know it if they don’t start to capitalize on their potential from now until the first game at the end of August. Mark Helfrich has already shown that once the Oregon offense is in full swing, if you fall off the train, it’s not stopping for you to get back on.

Looking at the Kelley, Stanford and Allen trio, it’s easy to see how they could contribute to the Oregon offense this upcoming season. Stanford, who is almost six-foot-six, could provide the Ducks with a red zone target out wide that they have not had in the past few years, given that their receivers have generally been the smaller, sleeker type. Kelley, also a member of the Oregon track program, could be electrifying as a return specialist on Special Teams, and Allen could become a consistent deep-ball threat with his blazing speed on the outside. Chance Allen hopes to see more of the field in 2014.

With all this being said, a lot remains to be seen in the performances of these three players in the upcoming season. Oregon has an incredible mix of talent and experience on offense, yet some of the talent is still untapped.

In this offense, someone is going to have to emerge and carry the torch as the Oregon playmaker out wide. And as the new season approaches, Stanford, Allen and Kelley have more than one reason to get out there on the field, and show both the spectators and the opposing teams what they’re made of.