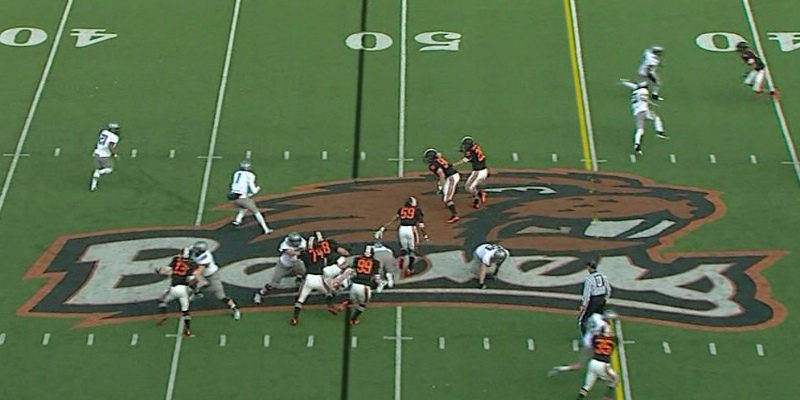 The transition from Chip Kelly to Mark Helfrich has been fascinating to observe in many areas, but now we can begin to compare their game plans, since Helf’ has now been heading Oregon for nearly two years. Are there similarities? What are the differences? I laid the groundwork in three videos two years ago that fans and coaches loved, thus I thought I would compare what we learned then from Coaches Kelly and Helfrich to what Coaches Helfrich and Frost are doing now. (Helfrich was the Offensive Coordinator under Chip Kelly, as Scott Frost is OC under Helfrich.) While my observations are simplistic, (I am just a hack, you know.) it does get the thought processes running, and I would appreciate your feedback as we all learn together! The Speed Double Option from 2010!

One strategy that Chip Kelly liked was to pull an old play out of the playbook to surprise opponents. In 2010 (above) Oregon had begun to use a Speed Double Option extensively throughout that season to complement the basic Inside and Outside Zone Read plays.

How much fun is it to see Darron Thomas pitch the ball to LaMichael James with Jeff Maehl blocking for them downfield!  This play worked well, and then Chip put the play in his back pocket and we did not see it after that season. Earlier this year I thought about how pulling that play out might help us…but maybe there is a reason they haven’t? An area of concern for Oregon offensively was our Red Zone offense going into this season. What ideas did the coaches have to improve our scoring to where it had been in the past? Above is a key 4th down and 1 against Washington inside the Red Zone again… Whoa!  Imagine my thrill up in the stands seeing an old Speed Double Option again! (See above.) What a perfect time to pull it out after FOUR years? Can he make the first down?

Mariota (above) has decided to keep it, but in front of him is the talented Husky Middle Linebacker.  He has to make the first down for Oregon to score.

What a great play call!

Marcus (above) dove into the pile and just barely made the first down!  The Ducks scored on the next play and the game swung Oregon’s way. What a great time by Helfrich to pull the same strategy as Chip and take an old play that fits into our offense and use it to surprise the opponent.  So far…Coach Helfrich/Frost is successfully imitating the Coach Kelly/Helfrich staff with this game plan strategy. A second strategy of the Coach Kelly/Helfrich team was introducing something completely new to an opponent, thus no possible way for the opponent to prepare for it. Above we see Oregon unveil the Pistol formation and run our offense through it. This play above is not a Zone Read, but just an Inside Zone play where the Zone Blocking begins as usual. (Gosh I love those throw-back uniforms!)

Byron Marshall can run out of any formation.

Byron Marshall (No. 9 above) has burst into the clear and is on his way for a sizable gain. The huskies were clearly thrown off by the new formation,  as Oregon introduced a bit of it in the UCLA game and expanded the plays out of the Pistol to include sweeps and play-action passes. So current coaches Helfrich/Frost have successfully duplicated the Chip/Helf staff in creating something new to throw at the opponent. Where is the Pistol?  Back in the playbook!

A key follow-up strategy to introducing a new play or series of plays under the Kelly/Helfrich staff was to turn around and put the play back in their hip pocket as they did with the Speed Double Option play.  Above we see in the Stanford game that Oregon was not running the Pistol, and returned to its usual formations.  Imagine the time taken by the ‘Furd to prepare for something that did not happen! Nice duplication of this strategy by the Helfrich/Frost staff! As the Ducks were playing California recently (above) I could not help but think about the change in the offense under Helfrich/Frost to more passing to balance out the offense (the dreaded tight-trips formation above). This play is an example of using the Duck running game to set up the passing game so nicely. Above you see Pharaoh Brown (red arrow) separate from the linebacker covering him because the Cal LB had run support as first priority. Of particular interest is how much walk-on Matt Pierson (No. 62 and yellow arrow above) improved and is doing a great job protecting Marcus Mariota.  How interesting that the defensive end Matt is blocking is none other than Todd Barr, whom the Ducks recruited hard to Oregon?

This staff coaches up wonderfully…

This is a pretty sweet passing touchdown to Brown as Oregon has turned up the amount of passing plays under the Helfrich/Frost staff.  I personally always felt that achieving balance in the offense was the last hurdle for Chip Kelly to complete and although he did not, his heir at Oregon has done so nicely with 56% of the yardage coming from the passing attack thus far this year. This staff has the game plans down…

It does beg the question concerning the increasing sophistication of the Duck passing attack…is it due to the presence of Mariota and is the staff utilizing the strengths of the personnel? Or is a permanent change as evidenced by the tremendous receiver talent at underclassmen and those joining the Ducks over the next two years?

That provides us some discussion points over frosty cold ones or hot cups of java, but what is clear to me is how the Helfrich/Frost staff has retained the components of the game planning of the original staff as hinted to in an earlier analysis. They watched these strategies become as important as the execution itself and I believe we will enjoy watching these themes surface in games over the coming years.

I wonder what they have in mind for the Pac-12 Championship?  Fun stuff to ponder….