The University of Oregon football team didn’t have the nationally ranked program or the impressive offense back in the 1980’s that it does now. In fact, the Ducks hadn’t even played in a bowl game for over twenty years until the 1989 Independence Bowl.

However, there was a wide receiver who added plenty of flash to the program from 1987-1989 and that made a crucial catch in the Independence Bowl that helped the Ducks “Win the day.” FishDuck was fortunate enough to speak with Tony Hargain last week about his time at Oregon, his time in the NFL and what he’s doing now. Here’s what he had to say:

QUESTION: WHAT SCHOOLS WERE RECRUITING YOU, AND WHAT MADE YOU DECIDE TO BE A DUCK?

ANSWER: I was mainly being recruited for basketball, that’s what I wanted to do. Schools: San Jose state, Santa Clara, University of the Pacific, New Mexico, BYU and then Oregon. I was a high school quarterback running the option. Denny Schuler pulled me out of basketball practice and he told me he was recruiting Chris Oldham at Highlands High School and was in the area.

He was also recruiting Brian Bedford, a defensive back, and when they were recruiting him, they watched me on film and said they were interested in having me come up and play maybe DB or WR. They kind of gave me the option to play either position. They were just interested in my athletic ability and thought I could help the Ducks at that time. 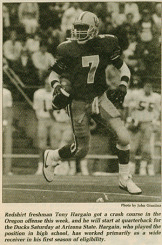 Q. WHAT DO YOU REMEMBER ABOUT YOUR FIRST GAME DAY EXPERIENCE?

A. We played against the University of Colorado in Boulder my redshirt freshman year and it was really exciting to play in front of a big crowd. They might have had 50-60,000 in attendance for their opening day game and I played pretty well. I had three or four catches, maybe 70 or 80 yards and that was exciting for me.

A. All of us got along really well. We were all really competitive. We had guys like Terry Obee, Chris Oldham, Bill Musgrave, Russell Lawson, Derek Loville, Andy Sunia, Rory Dairy, and Daryl Singleton. I think we were really lucky to have that group of players all come in at one time. I think we were real fortunate to have that recruiting class of 1986. So the chemistry was real tight knit and like I said, really competitive. Even if we were just playing basketball in the back of the UI, we all wanted to prove we were the best. We were all good friends, but we really competed hard and I think that’s what transcended over when we became juniors and seniors. We all came together and competed really hard.

Q. WHAT WAS YOUR FAVORITE PLAY FROM YOUR PLAYING DAYS AT OREGON?

I remember watching you score in the 1989 Independence Bowl. You caught an underthrown ball, spun to make the catch, spun again to make a defender miss and juked the next defender to score a 20-yard touchdown.

A. “Yeah, that was probably my highlight play at the University of Oregon. I think that particular play was the one that probably helped me get drafted as well. I had a good game statistically. I think had around 100 receiving yards. We were down 7-3 and that play put us back ahead during a crucial part of the game. I remember that play vividly. I caught the pass that was behind me and the ball naturally made me spin. Then I made about three other defenders miss and I’m really happy with the way that play turned out.”

I remember many players by plays that they made on the field and when I hear your name, that’s the play I think of.

“Well thank you. That was a really big play for me and was a big part of my career at Oregon. Going to a bowl game, and scoring when we needed a touchdown. I’m really happy about the way that turned out.”

Q. WHAT DO YOU THINK OF THE FOOTBALL TEAM NOW AND ITS SUCCESS?

A. They’ve got a great coaching staff. I think they have a great offense, with a lot of different weapons. I think coach Radcliff has a lot to do with the success of the Oregon Ducks. Because if you look at the way they play against other teams, they are much faster; two or three steps ahead of everybody. They not only have a lot of great athletes coming in, but coach Radcliff knows how to train them to do that.

Q. IF YOU COULD TAKE THE PLAYER YOU WERE BACK IN COLLEGE AND PLAY NOW, HOW WOULD YOU FIT IN THE DUCKS’ OFFENSE?

Q. WHAT DID YOU THINK OF U OF O AS A STUDENT?

A. I really liked the campus. I liked the professors that they had. I liked going to school there a lot.

A. The way the stands sit on top of the field, that they’re right on top of the field. Not pushed back like other stadiums where they have a track going around it. When you make a play on the field, you can really hear the fan reaction. It also makes it really tough on the opponents because of how loud it gets.

Q. WHAT WAS YOUR AREA OF STUDY?

A. Rhetoric communication with a minor in sociology. Q. IT’S HARD ENOUGH TO BE A STUDENT; BUT STUDENT-ATHLETES ALSO HAVE CLASS, PRACTICE, FILM STUDY, MEETINGS, TRAINING, ETC… CAN YOU DESCRIBE THAT LIFESTYLE CHANGE?

A. If you want to be an athlete and go to school, you’ve got to be dedicated. I was a three-sport athlete in high school, so I had study groups that I went to that kept me up in my classes. My coaches pressed us to do well in the class room, not just on the field. So, I just kept that same thing going when I got into college. To do well, you’ve got to apply yourself and I was trained to do that before I got to Oregon.

Q. WHAT WAS IT LIKE TO LEAVE THE DUCKS/PROS AND MAKE A LIFE BEYOND PLAYING FOOTBALL?

A. You obviously made more money and were more dependent on yourself. I remember going to Kansas City for the first time. I was drafted by the San Francisco 49ers out of college, so I was right at home on the West Coast, so that wasn’t really a big change for me there. But the next year, when I went to Kansas City and was on my own for the first time, that was different.

Now I had some money and I had to get a new house, in a new area, with no help and it was quite a change. It took me a little while to get used to it, but I did get used to it. Like I said, all the things I learned in high school and college about applying myself and staying focused really helped with the transition.

Q. HOW IS YOUR KNEE DOING AFTER YOUR INJURY AGAINST IDAHO?

A. My knee is fine. My doctor did a great job with the surgery. My kneecap actually broke in two pieces; it broke like a carrot. It was a clean break the way that it happened. The doctor put two screws in there and got it to heal where it was smooth on the bottom and there wasn’t any irritation because of that. I haven’t had any problems with the knee since they did the surgery. It took me about six to nine months to recover. Then I went on to the NFL and played on that knee after that. It hasn’t given me any problems at all. Q. WHAT ARE YOU DOING WITH YOUR LIFE NOW?

A. I own Hustlin USA Clothing Company and I’ve owned it since 2002. It’s a sports line of clothing and I geared and marketed it towards professional pool players. It’s currently the No. 1 brand of clothes in the billiards market. I have some of the best players in the world wearing my product now, which has been really beneficial for me and my company. I travel all over the country and internationally promoting my brand and it’s been doing really well.

Q. DO YOU HAVE A MESSAGE FOR DUCKS?

A. To continue to win the day like they have been doing. Continue to be a powerhouse for the whole country. That’s what I am most impressed with. Oregon has become a household name. I went to New York, Virginia and many other places with my Oregon hat on and random people stop me in the airports and say go Ducks. That’s what has impressed me the most. Keep winning the day like they have been doing.

What was the team Nickname for you? T-Gain

Best thing about Oregon Football? It was our unity and competitive drive. We were the Fighting Ducks and that’s how we played.

Who do you think were the best players on the team during your time with the Ducks? Derek Loville, Chris Oldham, Terry Obee and myself.

Toughest opponent (player) you faced while at Oregon? Mark Carrier Toughest opponent (Team) you faced while at Oregon? USC at the time

Teammate or mates that you learned the most from? Bill Musgrave

Did you have a pregame ritual? Listening to music and visualized myself making big plays

Do you have a single play in mind where you wish you had a do-over? We were playing Iowa the second game of the season and I scored on a post-corner play. After we stopped Iowa, we drove back down the field and I was wide open again on the post-corner play. But when I turned around to catch the ball, my feet clicked together and I fell. The ball was just out of my reach. I wish I could have that play over again so I could score back-to-back touchdowns. I think about that play all of the time.

Favorite U of O athlete from your career? Derek Loville

Favorite U of O athlete for all time? I’m going to have to say Derek Loville again. He came in and played so well as a true freshman and I think he was one of the main reasons for turning the program around. He was never intimidated by any of the powerhouse teams and always played really well.

You can’t live without? Riding my Harley Davidson and playing golf.

Anything you would like to add? No. I just want to thank FishDuck.com for keeping former Ducks’ athletes involved with the program and coming back and doing articles like this. I think it’s important and I want to thank you for doing that.