I first wrote the above one-word article on August 26, 2013 and it has been sitting unpublished in the FishDuck.com archives ever since. Though only one word long, the article proved to be spot-on for 2013, and as it happened, 2014 as well. Why 2015 will join those two years and the nine before them, and again, not be the year for the Dismal Dogs of the North, is the subject of this week’s Three-and-Out.

1. Player Personnel. There have been years when the Pounded Purple Pups could point to their list of returning starters and say, “This is the year.” 2015 is not one of them. With the Huskies returning only ten starters, the only cause for optimism goes to the team that has them next up on its schedule. Gone is the core of the defense that held Oregon to 45 points last year. Monster defensive tackle Danny Shelton and linebackers Shaq Thompson and Hau’oli Kikaha are off to the NFL and two more starters have burned their four years.

The offense may be in possibly worse shape. Last year’s starting quarterback, Cyler Miles, is on “leave of absence” and not expected to play in 2015. The offensive line needs to be rebuilt. The Huskies’ star running back, Dwayne Washington, returns, but he didn’t crack the 700 yard barrier last year, and last year’s passing attack ranked 89th in the country.

2. Ex-Boise State Coach Track Record. Chris Petersen was highly successful at Boise State, racking up an impressive 92-12 record. Before him, Dan Hawkins and Dirk Koetter also lit up the wins at Boise State, but both struggled once away from the Potato Palace. Hawkins went 53-11 at Boise State before cruising to a 16-33 record while trashing the Colorado program. Koetter, who was 26-10 at Boise State, did better, but only achieved a 40-34 record in his subsequent stint at Arizona State — and this included a 2-19 record against ranked teams. A downcast Chris Petersen would not be the first former Boise State coach to struggle on a bigger stage.

Bryan Harsin, the guy who took over for Petersen at the Blue Turf Lagoon, didn’t fare too badly in his first season, leading his team to a 12-2 record and a Fiesta Bowl win over Arizona, winner of the Pac-12 South, which was dubbed the strongest division in I-A football. All of this raises the question, was it Petersen or was it the magic of Boise? Make no bones about it — Boise is a great place for college football. The climate is agreeable and the support and energy from the community is fantastic. Whether Petersen made Boise succeed or whether Boise made Petersen succeed is a valid question.

It is also questionable whether Petersen will ever feel at home in Seattle. He may just be a small town guy at heart, and the synergy of a small-towner and big city culture may just not work out.

3. The Ducks. It would be impossible to contemplate the plight of the Crumpled Canines without discussing the Dominating Ducks. The domination goes beyond 11 straight years of not even being close. The domination isn’t just on the scoreboard — it’s in the heart of national perception.

Oregon is the now perpetual national Top-Ten, the team with the image, the what-will-they-wear-next uniforms, the team with the Nike mystique. And any list of “Nation’s hottest cheerleaders” is an advertisement for the Ducks. While Washington has turned coaches like a carousel, there’s not a player on Oregon’s roster who was born yet the last time the Ducks hired a head coach from the outside. 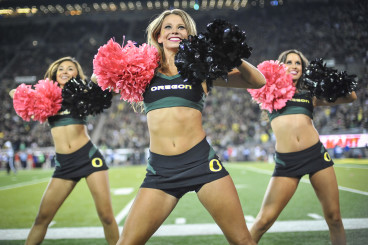 Oregon has quietly developed an arsenal of advantages over Washington.

And while Oregon may have a geographical recruiting disadvantage against virtually every team in the country, at this point Washington is not necessarily one of them. The weather at the two schools is fairly comparable, so Washington can’t really “dis” on the Ducks the way schools with smaller numbers in their northern latitudes could. When it comes to attracting recruits from the cities in the sunshine, Oregon presents a charged college town atmosphere that Seattle does not. There are those athletes who may sacrifice some sunshine to play for a top team in a college town. To leave the sunshine to play for a so-so team in just another big city, but where it rains — it could just be a harder sale.

If this turns out to be “the” year for Washington, Chris Petersen will have proven his genius. More likely, it will be a difficult climb back to relevance that will take time. Ever since the exit of Don James, the Huskies have struggled and failed to put together anything that vaguely resembles consistency. Petersen certainly perpetuated the consistency at Boise State, but can he create the consistency in Seattle?