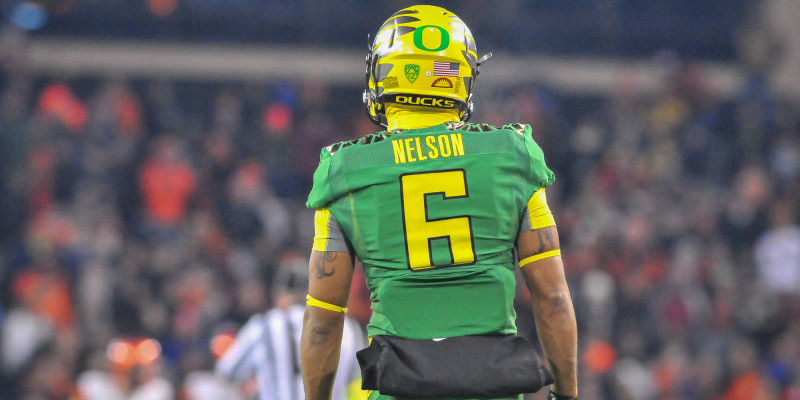 Most school’s spring games have come to a close, which has given us an idea of who should be on the radar for the upcoming 2015 season. Charles Nelson returns a punt for the Ducks.

Much speculation has been surrounding the quarterback position for the Ducks thus far. However, one player has exploded onto the scene since the end of Oregon’s 2014 season. Charles Nelson has proved himself to be a great player on all sides of the ball. He returns kicks, attacks the ball carrier on punts, lines up as a defensive back, and even catches passes on the offensive side of the ball — the man literally does it all.

It is almost as if Nelson is playing in high school again, where he played many positions. Call it an early speculation, but this could be a good reason as to why Nelson has a shot in being considered a Heisman Trophy candidate. Nelson makes a clutch play on special teams in the Ducks victory against Arizona in the Pac-12 Championship.

Nelson’s explosiveness on both sides of the ball truly has been a momentum-changer for the Ducks. In his first season as a true freshman at Oregon, he had 23 receptions, tallying 327 yards and five TDs. The speedster’s explosiveness off the line has made him an exciting player to watch whenever he plays as a receiver.

Nelson also proved he is an important player on both the offensive and defensive special teams. On the offensive side, he had 11 punt returns with a total of 171 yards and two touchdowns. As for kick-offs, he returned 22 kicks for 418 yards in 2014.

The soon-to-be sophomore out of Florida is also a freak on the defensive team — where he had a total of 17 tackles in 2014 for the Ducks.

Very few players have played numerous positions like Nelson has at the NCAA FBS level. His uniqueness will give him an edge as a player to closely observe as a potential Heisman contender. Nelson proved his case as a player who thrives both offensively and defensively during the Ducks’ spring game this year. The athlete had 144 yards and two touchdowns on offense, along with three tackles and one INT on defense. Seriously, who does that?! Even though the typical Heisman candidates consist of running backs, wide-receivers and quarterbacks, Nelson can stand out as a unique player to make a run at the award — as long as he keeps producing on both sides of the ball for the Ducks. It is unclear whether or not he will play solely on offense or defense — or both — but no matter where Nelson is positioned, expect him to be a player who will impact the outcome of a game.

It will be interesting to see how the Ducks plan on using Nelson in their lineup, but every Duck fan can expect to see him lineup on both sides of the ball for at least a few games, especially when Oregon has their usual tune-up games at the start of their season. [Ed. note — Michigan State won’t be exactly a ‘tune-up game.]

Whatever you do, don’t sleep on Charles Nelson making national headlines throughout the upcoming 2015 season.