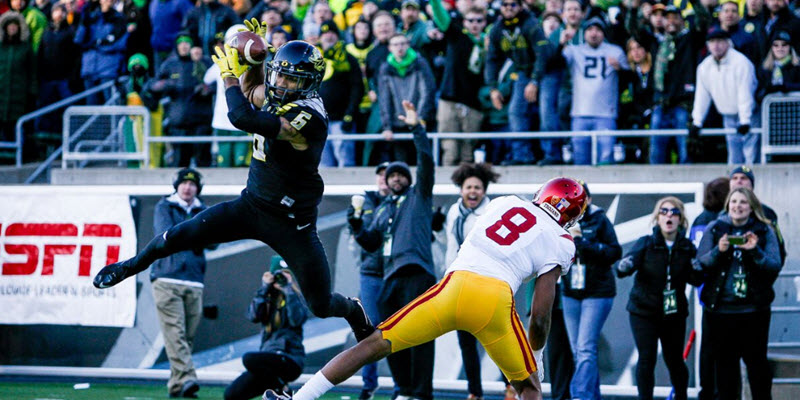 The stunning preseason predictions from Pac-12 sports journalists have placed Oregon third, or even as low as fourth (courtesy of Sports Illustrated) in the North division, let alone the entire conference. For long-term Oregon fans, this is scarcely believable; how can the first nine-win season in nearly a decade of double-digit wins be the inception of upcoming mediocrity for Duck football?

The answer from many journalists has been as follows:

Teams have caught up to Oregon, and Mark Helfrich has been riding the coattails of Chip Kelly for too long. He is running the same offense and has not been as innovative as the legendary coach before him.

I have often read a version of this comment over the last three years and bit my lip to restrain myself from writing emails I would later regret. I do not believe these comments are made maliciously, but out of laziness and ignorance by the professionals in the industry that I now participate in.

Let’s look at the facts concerning the Oregon offense since Mark Helfrich has been named head coach. Chip rarely saw a running play he didn’t like …

According to NCAA Football Statistics, Oregon has been one of the top five scoring teams in the nation over each of the last five years. The first two were with Kelly as head coach and Helfrich as offensive coordinator.

Thus, regardless of the position Helfrich has held, Oregon has been one of the nation’s leaders in scoring throughout his tenure. That begs the question of just how much impact Helfrich had on Kelly during the Chip Era in Eugene.

When you visit GoDucks.com and go into the statistics for the past three years once Helfrich assumed the cockpit and compare them to the three prior years with Kelly as head coach, an interesting pattern begins to emerge.

We all know that coach Kelly was stubborn to a fault about the running game and lost opportunities to move the football because it was apparent to Duck opponents what he would do. Indeed, the stats bear this out.

Add up the average yards per game during the Kelly years for passing versus running, and you see that 65% of Oregon’s yards were gained on the ground, with only 35% through the air (this includes the first fabulous year with Marcus Mariota as a starter). Chip primarily liked using play-action passes set up by the running game; he was not one to break this tendency often. Critics were correct in that the Ducks were not an accomplished pocket passing team nor were they comfortable doing it without play-action. Hence, the book on Oregon was “get them into 3rd-and-long.”

(That sounds profound for about a second, until you realize that’s what you want to get all teams into!)

Oregon’s passing game under Chip was still effective and helped get Oregon to within a field goal of the National Championship … but the stats show Kelly was clearly a “run-first” coach.

Now we look at the Helfrich years, and see a massive change.

The Ducks ran the ball 48% under Helfrich, and passed the ball 52% of the time! There are many reasons for this transition; they had an emerging Heisman candidate at QB, and it made sense to adjust the offense around this generational talent. But Oregon not only threw the ball effectively last season with a healthy Vernon Adams at QB, we saw the LONG BALL at Oregon for the first time. That impact is still being felt.

Only the biased observer would not acknowledge the incredible job coach Matt Lubick has done at Oregon, as he has recruited some of the finest wide receiver talent in the nation. His attention to detail enables Oregon receivers to get open, and the blocking downfield is even improved over the superb changes by Scott Frost. It only makes sense to utilize this talent, which in turn helps the Ducks’ running game, as explained below. The unstoppable force of Pharaoh Brown rejoins the Oregon Offense.

The shift to a balanced offense makes Oregon more potent, as defenses don’t dare load-up the box to stop the run. Moreover, with a variety of weapons (thank you, coach Lubick), opposing defenses can’t just key on one or two players.

This year epitomizes that philosophy as defenses must contain Darren Carrington II, Charles Nelson, Dwayne Stanford, Devon Allen, the freak–Pharaoh Brown, all while still trying to account for 230-pound Royce Freeman in the run game? As a defensive coordinator, I would be screaming for help.

A major criticism leveled at Helfrich can be summed up by our good friend John Canzano of The Oregonian. Canzano feels that Mark has not made a major seismic shift in college football as Chip did in being one of the innovators of the Zone Read, no-huddle  Spread Offense. What, Canzano argues, has Mark done as opponents have caught up?

Look above my friends; as defenses began new strategies such as the Scrape Exchange, the Cover Zero defense, or the Bear Front to take away the Inside Zone Read, Helfrich is balancing the offense with the passing attack to make defenders truly cover extraordinary athletes in space. This balance of the offense has kept Oregon in the top five in scoring despite the new tactics employed to slow down the bread-and-butter of our beloved Ducks.

Besides … Canzano likes to manipulate readers into indignation, anger or sympathy for his chosen subject. Why doesn’t he follow his own advice to Helfrich and change his shtick every couple of years?

That was not very noble, but it was satisfying and accurate.

Let’s look at some examples of how coach Mark Helfrich has changed the Oregon offense since Chip Kelly departed, to keep us among the nation’s elite.

Chip loved to pound the basic plays of the Duck offense that I’ve created videos of such as the Power Play (over 50 Oregon offense and Defense videos viewed 1.4 million times). The problem is, after a couple years of pounding this play, once defenses saw the guard pull, they knew what was coming and would crowd the inside gaps. So if defenses are going to add more defenders to the box? Helfrich brought more blockers at the point of attack in the Quarterback Power Play introduced this last fall. I love this derivation of a fundamental play in college football, one that Kelly beat to death. Sweet. At a coaching clinic, Helfrich explained to other coaches in attendance how he liked to attack the new tweaked Cover-3 and Cover-4 defenses that have emerged to counter the Spread Offense by sending three and four receivers downfield in vertical patterns. Cover-3 and Cover-4 schemes have been around a long time but have been altered (quite uniquely by squads such as Michigan State) to stop teams such as Oregon.

How can a quarterback check all four wide-outs and throw the ball at the precise instant? Helfrich explained how he coaches QBs to simply check two particular receivers with match-ups in the Ducks’ favor. In the example above and below, Oregon sends four receivers out initially and then trails the running back (yellow arrow to Kani Benoit, above) to create the devastating one-on-one match-ups that Mark desires. The USC middle linebacker was inexperienced and simply could not keep up with Kani by backpedaling.

The strategy above is not one you saw from Kelly, and it is a brilliant move by Helfrich to offset the new defenses designed to stop our beloved Ducks. Under Chip we saw “wheel” routes out of the backfield but not highly focused “Verticals,” as you see above. (Watch the flag routes going to both corners that suck the defenders away from the middle). This is damn good coaching and game planning in terms of play design and targeting opposing personnel.

It is astounding how the Pac-12 media can make these lazy accusations without doing any homework to see how the Oregon offense has become more balanced under coach Helfrich and how the fundamental plays of the Kelly offense now have new variations (as mentioned above) to counter new defensive tactics. What I am sure the journalists have also missed are the completely new wrinkles added to the Oregon Spread Offense under Helfrich, like what you will see below.

The third major change of the Oregon Spread Offense under coach Helfrich is the completely new aspects introduced in games to throw off the opponent.

Above, the Ducks are taking on the vaunted Husky defense (with four high NFL draft picks) and respond to the challenge by messing with their heads early in this 2014 contest. For the first time ever, the Ducks come out in a Pistol formation that is not meant to be a novelty, but a sincere new component to the Ducks’ playbook. Coach Helfrich has changed more than one thing since Chip Kelly….

The new formation and movement was enough to create hesitation by the Dogs and thus allow a half-second more time for Oregon offensive linemen to set their blocks and spring Freeman for a tasty scoring play, helping drive Oregon to another win over its arch-rival (no time to cover it, but Helfrich later threw another nasty surprise at the Huskies that they simply had no clue was coming).

Any journalist that claims that Helfrich is still running the same Chip Kelly offense and has not been “innovative” is simply ignorant when it comes to Oregon football.

Have confidence and faith in your own opinions, and know that your friends at FishDuck.com will be there offering our pooled knowledge, as well. We will learn together and enjoy the amazing season ahead of us that much more!

***We are now starting up a light schedule going forward that will be 3-5 articles per week in the areas we are good at such as Editorials, Analysis, and Recruiting. We are still working on our new FishDuck.com site that will be out in the next three months and it will feature our usual articles as well.***