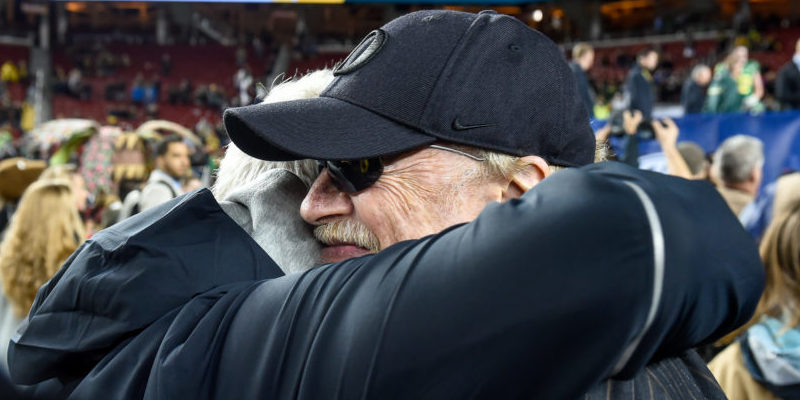 As all good Ducks fans know, you can’t spell philanthropy without P-H-I-L. I don’t know Phil Knight, and aside from bumping into him, literally, in a Portland crowd after a Spring Game many years ago, I’m pretty sure I’ve never heard him speak. But he certainly spoke to me this past weekend, albeit through the media. Phil Knight attending a game of his beloved Ducks.

By now you’ve all heard the scuttlebutt, Knight offers to pay $10m per year for a new head football coach at Oregon. Who knows if it’s true? But if he watched what I watched on November 5 against the Trojans and November 12 against Stanford, I’ve a pretty strong hunch. Hint: It’s true.

Now I know that it’s impossible to stand in another man’s shoes, or to truly know what’s going on in his mind, but just for fun, let’s give it a try.

We know, for instance, that Phil’s a pretty smart guy. After all, he’s got degrees from both Oregon and Stanford.

We know that he’s a loyal and committed guy. Loyal as in total philanthropic donations to the U of O totaling somewhere north of $900 million ($300m+ Athletics/ $600m University). You can add another $500 million in donations to Stanford (Business Management Center and the Knight Scholarship Program).

We also know from his years as a lettered distance runner at Oregon that he’s ultra competitive and that his business acumen as the founder and driving force behind Nike is off the charts. Lastly, we know that he’s as ballsy a risk taker as there’s ever been. Where it all started for Phil Knight.

At age 25, recently out of graduate school, Knight traveled to Japan and convinced Onitsuka Tiger senior management that he should be their Western US distributor for Tiger running shoes. His company? Blue Ribbon Sports, a name that suddenly popped into his head during their initial meeting.

His distribution model? There wasn’t one, unless you consider driving up and down the West Coast and selling shoes out of your station wagon to be a distribution model. Fast forward some eight years later and you have Nike. The guy absolutely pulled it off. Coach Helfrich at the  Rose Bowl.

Hmmmm, let me see: How might you be feeling about that ROI (return on investment) of yours? Are you putting together a mental flow chart of the problem? Applying some system analytics to identify root cause issues within the program? Maybe some calculations around the current annual expenditure on coaching staff salaries? Are you satisfied with the University’s rate of return on that annual $8-10 million (depending on bonuses) expenditure? I wonder.

Also I wonder; did Phil flip channels (as I did) during that dreary second half of Ducks/Trojans to catch the beginning of LSU/Bama? Did the stark contrast between those games have an impact? Oregon, overmatched on both sides of the ball by a big, fast, physical USC team … the same Trojan squad that was hopelessly dismantled by Alabama to the tune of 51-6?

Did the speed and ferocity of the line of scrimmage play between LSU and Alabama leave him in awe? Because truly, the gap between Oregon and elite national competition is vast and multilayered and won’t be fixed simply by having our young players mature. OK … so now just stop for a minute and imagine that you are Phil Knight. You’ve spent the last 20 years investing in and nurturing your dream of a National Championship in football for your alma mater. And after all of that time, and money and energy, the gap between your beloved Oregon Ducks and the tradition-rich blue bloods of the sport is as wide as it’s been in a long, long time.

You’re Phil Knight, and you are 78 years old. Your mind tells you that time is short, that the rebuild work on that once-beautiful Green Machine will be extensive and that it will take some time to complete.

Time and a talented, hard-charging CEO to drive the process. You know the type, you’ve seen them your entire life … and you see one every waking morning when you look in the mirror.

$Ten million a year? Pffftt … why the hell not? And just in case no one else has said it, let me be the first … Thanks, Phil.

Phil-Facts: So Many "Oregon Unknowns" Surrounding Phil Knight...
A Tribute to Uncle Phil
Oregon's Uncle Phil
An Open Letter to a Favorite Uncle