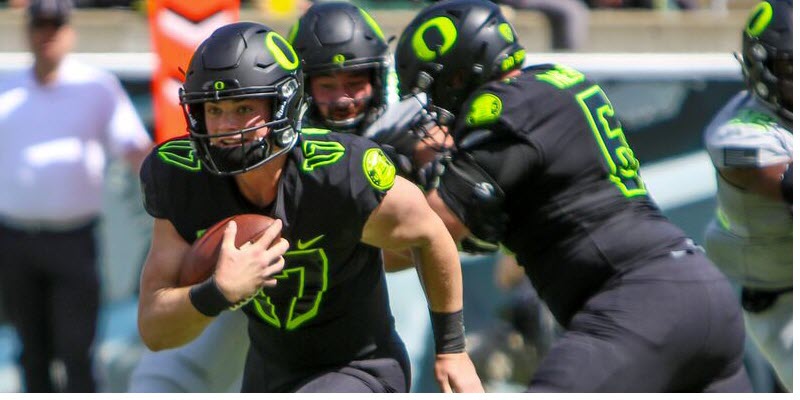 The Oregon Ducks signed only one quarterback in the 2016-2017 recruiting cycle and they made it count in Braxton Burmeister. He was a four-year starter for La Jolla Country Day School located in La Jolla, California, a small affluent suburb of San Diego. Other notable alumnus/alumna of this school were 1994 Heisman Trophy winner Rashaan Salaam and Women’s basketball star Kelsey Plum. Burmeister put up prodigious statistics in high school throwing and running for a combined 14,971 yards and 195 touchdowns. He peaked his senior year with 5,931 yards and 80 of those career touchdowns to earn First Team Parade Magazine All-America honors. Personal achievements aside, 247 Sports.com considered him the 10th best dual-threat quarterback (four stars) in the country. While ESPN rates him three stars and the No. 18 player at his position.

Triangle numbers (height, weight, and speed) are used by scouts and player personnel evaluators to quickly describe and “slot” players at the NFL level. It’s used at the collegiate level also. Braxton Burmeister has been listed from different sources as anywhere from 6’0 to 6’2 with the prevailing opinion that he is 6’1. The opinions of his weight vary from 195 lbs. from Sports Illustrated (low end) to 213 lbs. from Scout.com on the high end.

I have not seen any information on his hand size. However, based upon information available from sbnation.com of quarterbacks measured at the NFL draft in 2015, players of similar size to Burmeister had a 9″ to 9-1/2″ hand measured from “pinkie finger to thumb.” This is adequate size to grip and spin a football. It is also large enough to limit blind side “tomahawk” strips from pass rushing opponents.

I have only seen two clocks on him. One comes via mbasportsrecruiting.com and they list his 40 yard dash time at 4.65. This time appears to be unverified. Another one also appears unverified at 4.6 according 247sports.com. Based upon the tape I have seen, I don’t believe that that either of these times are unreasonable. Though he is not a burner, he does appear to be very quick and possesses excellent speed for the position. His shuttle time and power ball throw reported by ESPN are very good (shuttle) to elite (power ball throw).

Braxton Burmeister has benefitted from personal tutoring and coaching. His father Danny Burmeister was an 1981 Parade All-American and played safety at North Carolina and later for the Washington Redskins. He has subsequently hired four coaches to assist in the development of Braxton since the seventh grade. Former NFL quarterbacks Jeff Garcia and Akili Smith to hone his mechanics, Steve Wilson who was the Head Coach at Howard University (1989-2001) and Texas Southern (2004-2007) to mentor the mental part of the game. Wilson also played in the NFL from 1979 to 1988 with the Dallas Cowboys and the Denver Broncos.

In the above clip, Burmeister does a nice job checking down to his running back out of the backfield for a touchdown. Looking off his first receiver is an advanced skill. Going through progressions is a required skill at the collegiate level.

This is a 36-yard “Garbage Can” throw up the sideline. These timing patterns are very difficult because the receiver is running directly away from the quarterback. Burmeister makes it look easy.

Here, Burmeister takes what the defense gives him. This is a back shoulder throw. Very unusual at the high school level, especially in a game. It takes hours of work with a receiver to get the timing down. Very impressive.

In the video above, Burmeister does a nice job of extending the play which allows him to keep his eyes downfield, waiting for a receiver to get open. He then completes the pass. This is an NFL skill.

Burmeister demonstrates elite footwork and complete command of the offense. He keeps his head on a swivel and extends the play until a receiver gets open.

Burmeister demonstrates a clear understanding of his key reads and the technical part of the “mesh” with the running back. This is a complex skill that must be perfected in this style of offense.

In the video above, Burmeister flashes some “wiggle” in the open field after he gets past the line of scrimmage to the second and third level. Notice the cut back against the grain.

I think Braxton Burmeister’s further development as a quarterback is going to be essentially in two stages. The first one, obviously, is as the triggerman in Coach Willie Taggert’s power spread offense. In this style, there is a premium placed on the quarterback being a key part of the running game, rather than them merely being a distributor to all of the pieces of the offense on the field. This model is clearly Quinton Flowers whom has had great success at South Florida. As Burmeister transitions from the collegiate level to the NFL, you’ll see his game morph from a run-oriented offense to a pass-first concept. At the NFL level, Russell Wilson comes to mind when I watch tape of Burmeister. Both Quinton Flowers and Russell Wilson are great athletes with a command of the huddle and the game on the field. They have demonstrated a nice combination of run-pass skill set’s that define the dual threat quarterback today. Let’s take a brief look at both of them.

The “do everything” triggerman in Coach Taggart’s “Gulf Coast” offense, Quinton Flowers was a three-star recruit in 2014, according to ESPN and 247sports.com.

Quinton Flowers above on a scramble during a game. Russell Wilson was a transfer from North Carolina State to Wisconsin for his final season of collegiate eligibility. He excelled as the starter for the Badgers, leading them to a Rose Bowl berth. He subsequently was selected in the third round of the 2012 NFL Draft.

He has exceeded most analysts’ projections and has quickly become an established starter (and star) for the Seahawks. Although he is undersized (5’10 – 3/4″) he has freakishly large hands (10 – 1/4″) which is so important for the quarterback position. Wilson’s athleticism is elite for his position in the NFL.

Russell Wilson, as shown above, demonstrated at an early age the ability to move in the pocket and keep the play alive, while focusing downfield. He was equally adept at throwing to his right or left, in the pocket or on the run. Great runner with a lot of wiggle.

Braxton Burmeister is a well-built athlete, but just an inch or two short (ideally) for the position. However, based on his age, he could certainly get a little taller during his time at Oregon. He is a great (not elite) athlete, but certainly possesses the ability to play the position at the highest levels. Braxton Burmeister in the Spring Game

He appears to be disciplined in the passing game; he sets his feet when he throws the ball, whether he is in the pocket or on the run. He has been well-coached and he has taken these lessons from the classroom out onto the field. He has a nice over-the-top delivery, great pocket awareness and “feel” for the pressure. His extension of the play and way of throwing receivers open is elite. He is a terrific runner with a little wiggle (a natural cutback guy). His decision-making is a work in progress with respect to run vs. throw. Sometimes it appears he bails out of the pocket too fast, rather than let the play develop. This aspect of his game will improve with maturation and increased snap counts.

Burmeister at Spring Practice. Nice over the top delivery.

Braxton Burmeister will see the field quickly at Oregon because he and his family have been preparing him for this since the seventh grade. He is a very polished kid.

Oregon has had some fine quarterbacks play for them in the past two or three decades. Braxton Burmeister is going to be in the top two or three by the time his career is over for the Ducks, and he moves on to the NFL.