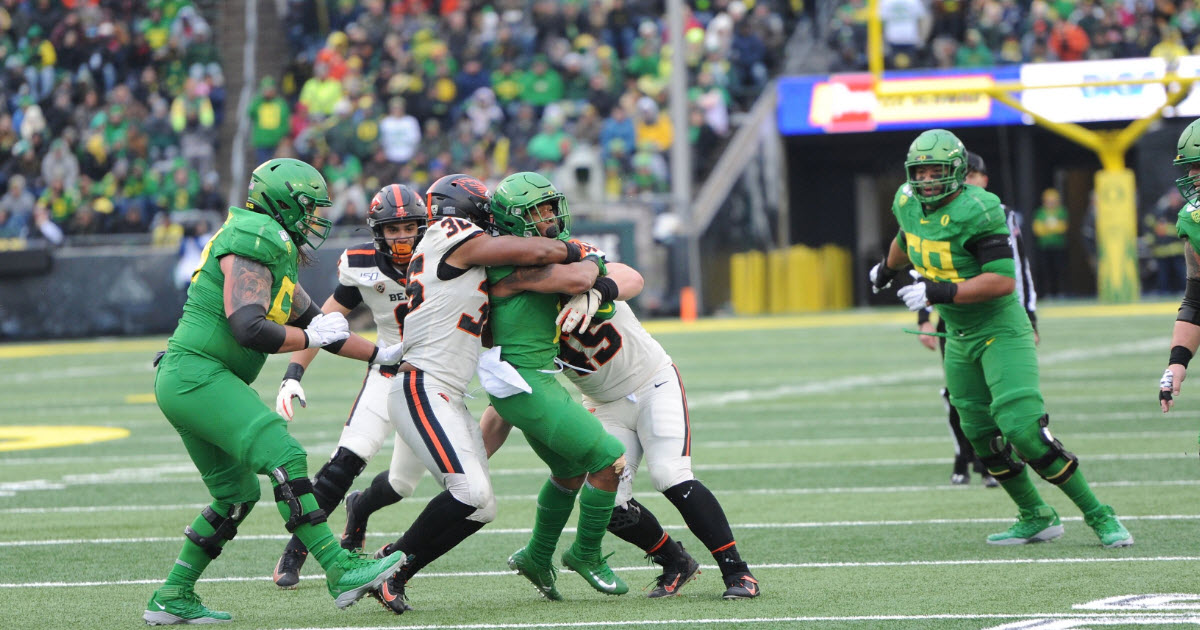 Oregon won the Civil War 24-10 to give coach Mario Cristobal a fine 10-2 record, but left a majority of Duck fans with less than celestial euphoria. Former All-American and Heisman Trophy candidate Justin Herbert performed as the good soldier he is at quarterback; good enough to tip the scales over an Oregon State team that refused to be overwhelmed, but a shadow of the No. 10 who thrilled in his four-year career in Eugene.

This game was one of several boring contests this season; a lot like the Arizona game, actually. Cristobal, with a great talent at quarterback, managed to limit his role this season to the point that as the season wore down, his performance diminished like a candle running out of wax.

Once again, the Ducks utilized the pistol formation to great degree, and to the delight, no doubt, of Beaver defensive coaches and players. The following plays will demonstrate the limitations the formation puts on the Oregon offense, such as predictability and the lack of a threat to the secondary.

This is the same play (above) that the Ducks failed on last week against Arizona State and the first game of the year against Auburn. Evidently, coach Cristobal was stubborn in his insistence to make this work. The problem, in case it hasn’t been noted yet, is that the running back gets the ball seven-and-a-half yards deep in the backfield, and without any threat coming back at them, the edge defender, whether it’s a defensive end, or in some cases, a defensive back, comes hard off the corner and can deny a cutback and tackle the runner before he can reach the line of scrimmage.

If you were checking the numbers, observe that there are ten men massed on the defense, and a 6-foot corner covering Johnson, who is 6-4 and a threat on back shoulder throws or posts, with two-thirds of the field to work with. Also, count the number of defenders on the number of blockers on the right side of the Duck offensive line: four linemen and a wing-back against four Beavers. Why then, isn’t Oregon using that advantage?

This (above) is a better play to run in the same situation as the Ducks faced in the previous example. Oregon enjoys the same man advantage out of the same formation to the right, where they have an extra offensive tackle aligned. In this case, Habibi-Likio makes the first down, but could have scored if Hunter Kampmoyer (No. 48) blocks his defender and Brady Aiello (No. 66) blocks his.

Behind perfect protection provided by eight players, Herbert fakes the run to Travis Dye (No. 26), which holds the front five pass rushers, and then hits Johnny Johnson III (No. 3) for a 28-yard touchdown. Although this throw was a tad bit late, Herbert has shown a talent for throwing the deep ball on inside breaking routes. Why hasn’t he had more chances?

It is confounding that offensive coordinator Marcus Arroyo has neglected the middle of the field in his passing attack, especially with the Ducks having tediously cemented the notion that as a “run first” offense, they can be counted on to continually run the ball between the tackles. This should influence linebackers and safeties for play action passes over the middle.

Above is a recipe for a sack, as six players do what they are supposed to do and one doesn’t. In this case, Kampmoyer (No. 48) moves past his assignment: the middle linebacker, who avoids him and takes down Herbert from behind. With the running back helping seal inside, there was no reason for Kampmoyer to overreact to his inside, instead of staying square and under control with the OSU linebacker.

The play is typical of many that disrupted the Duck offense; a majority on point but someone not doing the right thing. This is also how you shave 20 points off your Autzen Stadium offensive point average. No telling what good things could have happened if Herbert was given the time to throw the ball in this situation.

This example is more evidence for diminishing the use of the pistol formation in the Ducks’ predictable and limited offensive arsenal, if you can use the term arsenal.

Juwan Johnson (No. 6) motions back to the formation and brings a defender with him, a defensive back who is three yards deep from the line of scrimmage when the ball is snapped. The running back, CJ Verdell (No. 7), is seven yards deep when he gets the ball and is tackled by the defensive back that comes around the block of Johnson to make the tackle from the side. A great offense can’t allow a defense to do this without suffering consequences.

Too often, defenses have used a hard charge by the edge defender to restrict the cutback option for the running back, and often tackling him from behind. Without superior quality running backs or any kind of run threat by the quarterback, the pistol formation is about as formidable as paper mache’. The Oregon defense is going to have their hands full…

As a reward for dominating what turned out to be a weak North Division, the Ducks get to take on Utah’s bruising No. 5 nationally ranked team that is as tough as their head coach appears stalking his sideline. You can count on the Utah defense to pound Oregon’s offensive line and running backs into the dirt if the pistol is utilized as it was against Auburn, Arizona State and Oregon State. The Duck defense has great heart, but they’re going to need more yards and points from their offense to compete with a strong team that is as physical as Auburn was.

In August, if you asked if there would be satisfaction for Oregon to be 10-2, winning three of four road conference games and a berth in the Pac-12 Championship at the end of the season, you would be ecstatic.

But after seeing how things shook out with the demise of explosive offensive football and the pain of watching the erosion of a gifted quarterback’s potential, the result is unsatisfactory; it leaves a bad taste. Duck fans should be thankful for the good things this football team did, but this season could have been even more, and the downward trajectory of the offense has brought Duck Nation clouds of gloom. Hopefully, such clouds are avoided this Friday in San Francisco.