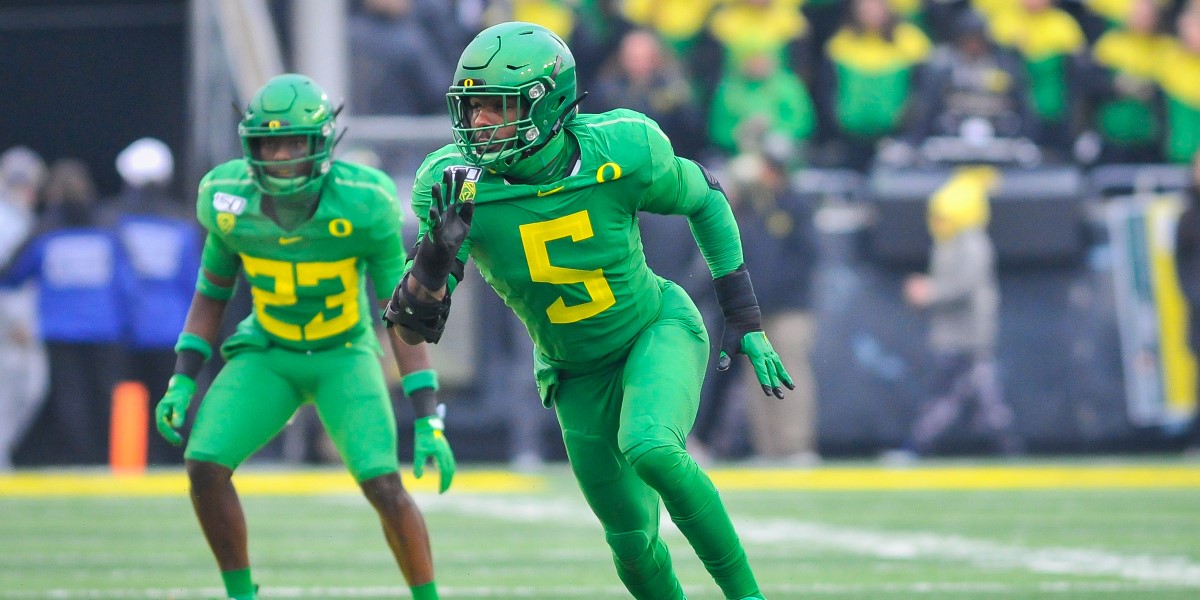 Under Mario Cristobal, Oregon’s coaching staff could write the book on finishing strong in a recruiting cycle. It’s almost a guarantee that there’s a late push for a top recruit or a string of high-end talent that commit after Oregon’s coaching staff tirelessly gets their word in edge-wise and brings it all home to Eugene. In four years at the helm, Cristobal has taken Oregon from being perennially in the local mix, to back-to-back top recruiting classes in the Pac-12 and is already firmly in the driver’s seat for a three-peat.

What more could Ducks fans ask for when having to compete nationally against heavyweights Alabama, Clemson, Ohio State and the rest?

How about what’s projected to be Oregon’s top recruiting class ever? More importantly, the potential for a Top-5 class nationally.

“We feel this is going to be our best class, quite honestly,” said Cristobal. “I know everyone wants the numbers to stack up early, but it’s almost like we’re big game fishing now.”

As it sits this morning, Oregon has seven commitments in the class of 2021 headlined by quarterback Ty Thompson (4-Star/Mesquite, AZ) and offensive lineman Bram Walden (4-Star/Scottsdale, AZ). While the early-cycle quantity of recruits does not necessarily jump off the page at first glance, the quality of Oregon’s haul is the head turner. Rated fifth in terms of average-rating-per-recruit by 247 Sports, this early recruiting period success bodes well for Oregon’s permanent entrenchment amongst the nation’s elite.

“In terms of the groundwork that’s laid and the things that we feel are pretty imminent, we feel very strongly about (this upcoming class),” said Cristobal.

It would appear that the almost yearly and unceremonious holding of one’s breath in regards to whether Oregon will have a good or great class may finally resolve to the more a more favorable question; will Oregon have one of the best classes nationally?

The aforementioned Walden committed to the Ducks on May 8th and further signals Oregon’s dedication to building the nation’s top offensive line year in and year out.

“I’m beyond thankful to be surrounded by amazing people on this journey, always wanting the best for me. With that, I am honored to announce I am 100% committed to the University of Oregon,” said Walden via his Twitter announcement. At 6’4, 270 lbs., Walden’s freakish athleticism and notable technical skills will need to be fostered while adding bulk. Rated the No. 1 prospect in the state of Arizona, Walden continues the trend of top offensive line talent headed to Eugene with fellow commit and vaunted center prospect Jackson Light (4-Star/Draper, UT) already in tow. With the aim of a replenishment of riches as recently departed stalwarts Shane Lemieux, Jake Hanson, Calvin Throckmorton and Brady Aiello all find themselves now on NFL rosters, Oregon’s newest commitment in Walden further solidifies the stable that will produce victories in the trenches.

Nobody can deny Cristobal’s effort on the recruiting trail. The 2015 National Recruiter of the Year is surrounding himself with equally talented pitchmen and it wouldn’t be a stretch that his recent additions to the coaching staff, namely Rod Chance, have made great use of their short time with the Ducks working to recruit on the defensive side of the ball. Defensive back Jaylin Davies (4-Star/Santa Ana, CA) appears to be firmly considering Eugene when he recently announced his top four schools.

“(Oregon is) definitely one of my top schools now, I have serious interest in them,” said Davies. “Mario Cristobal was always involved and always showed me love and now I have a good relationship with the new DB coach, Rod Chance as well.”

Originally not considering Oregon as a destination, Davies’ quick gravitation towards Eugene is just one of countless indicators that Cristobal and Co. have some of the best recruiting chops nationally.

“When I dropped my top seven, they weren’t really recruiting me as hard as the other schools. They actually started to pick up shortly after I dropped that list. Growing up, I love watching Oregon, everyone did. They had the best uniforms and I liked how they played. That was in the Chip Kelly days, they were a lot of fun to watch.”

At 6’1, 165 lbs., Davies’ strong prep background at Mater Dei (CA) and excellent fundamentals could instantly bolster the defensive backfield with Oregon set to graduate both starting corners Thomas Graham Jr. and Deommodore Lenoir. With Oregon coming on strong and a decision announcement expected sooner than later, expect Chance to land his first marquee recruit as a member of the Ducks coaching brass, stay tuned!