If there was a primary reason to adapt a spread offense, it usually would be a desire to put fast athletes into open space. The fact that the spread works hand-in-hand with modern zone-blocking schemes and the no-huddle system is just icing on the cake for any team that has made that transition from a traditional offensive scheme. 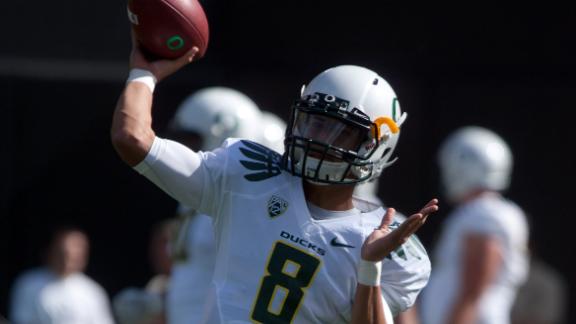 Up north at Washington State, new head coach Mike Leach’s Air Raid system is designed to put his athletes in space vertically. That concept doesn’t get any more complex than the way it sounds. Leach literally has his passers throw the ball to open spaces on the field wherever the receivers can find the gaps.

This should stir up some memories of the old Run-and-Shoot offense,” popularized in the 80’s and 90’s and widely used in the NFL by the Houston Oilers, Detroit Lions, and Atlanta Falcons.

Surprisingly, the true run-and-shoot is now a dying breed of football, but its concepts are alive and well, and will remain that way forever (much like how elements of the veer and wishbone offenses now permeate in the zone read attack). The Run-and-Shoot, or R&S, is a reactionary based-offense, where the quarterback and receivers work together to determine coverage and potential weakness in the defense.

Instead of using a variety of formations to gain leverage over a defense, the R&S lines up with four receivers and one running back on every play, and depending on which hashmark the ball is on will utilize 2×2 and 3×1 alignments exclusively. The attack implemented no tight ends, no fullbacks, no tazers; only four tacticians going downfield on nearly every play.

Who better to teach the basics of the Run-and-Shoot than the only coach still living true to the R&S, June Jones of SMU.

Jones is describing the GO Package, a series of reads done by the QB and the receivers to literally shred any coverage a defense can may use. If the defenders drop deep, the receiver cuts his route down. If the defenders stay close, the receiver gets upfield for the fade route. Should the defense shade inside, the receiver goes outside, and vice versa. The underlying theory is that a defense can never stop a perfect pass. Should the offense correctly identify the coverage, and the QB and wide-outs are on the same page–look out, there is no stopping the play.

To put it simply, the new-age zone blitz scheme has killed the R&S. Previously, any time that a team blitzed the R&S, it would leave a man open. With zone blitzes, defenses can apply pressure without having to sacrifice downfield coverage, and all of a sudden, the R&S was rendered obsolete..

Its memory, though, is still carried on by the air-raid offensive schemes implemented in Pullman, Stillwater, and Ruston, amongst other schools utilizing this R&S evolution in the air-raid all out passing attack. Leach’s “6” route is the most ambiguous of all air-raid concepts, making it easy to draw comparisons with the R&S. The route is, again, simple: go to where the defense isn’t.

Sometimes the ball is hurled 50 yards downfield, sometimes it is plopped over the top of unexpecting linebackers, or the QB could laser a pass to his receiver’s back shoulder–completely out of reach from the defender.

In the 2008 matchup between Texas Tech and their rival Texas Longhorns, a last minute drive was capped by Michael Crabtree’s unbelievable catch and subsequent tight-rope walk into the endzone. That particular moment is generally known as the pinnacle of the air-raid’s fame.

Fittingly, the route that Crabtree ran was a “6.”

Marquess Wilson, the incumbent star Cougar wide receiver, will be slashing through defenses immediately under the “six package.” Leach’s offense has traditionally worked best when he has had one do-everything receiver to play pitch-and-catch with his quarterbacks. At Texas Tech he had Wes Welker, and Michael Crabtree. Now at Washington State, Leach’s offense is immediately a deadly weapon with the combination of quarterback Jeff Tuel, and Marquess Wilson, one of the top receivers in the entire country, a sure Biletnikoff Award finalist this year.

In the past two seasons Marquess Wilson has been one of the top targets in the Pac-10/12, in Leach’s Air Raid attack Wilson will be one of the top players in the entire country. Why? He’s a talented all-around receiver who can catch any ball thrown his way and is dangerous in open space, in Leach’s Air Raid despite defense’s best efforts Wilson will be in open space more, making him downright deadly.

Perhaps the next phase in the Oregon offense is utilizing some R&S style routes, taking the simplistic approach of getting their best athletes into open space downfield. It is only logical to put DeAnthony Thomas or BJ Kelley into the “six” system, something that may become a more standard element of head coach Chip Kelly’s scheme with new quarterbacks in place no longer handcuffed in scheme by Darron Thomas’ microscopic limitations.

With time to work with his young signal-callers, Coach Kelly has the ability to create an even more unstoppable offensive juggernaut, through simplicity. Oregon has world-class athletes, get them the ball in open space.