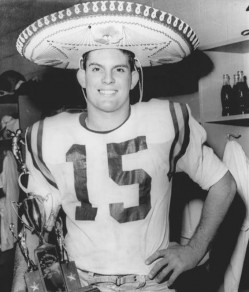 The 1963 Oregon Ducks football team finished 7-3 on the season, accepting an invitation to the 1963 Sun Bowl, where they took on the Mustangs of SMU. Led by Dave Wilcox, the Ducks were a team of over achievers, who banded together to get Len Casanova his only bowl win at Oregon.

Following the victory over Oregon State on November 30th, Oregon awaited a possible bowl game invitation. That invitation would come officially on December 7th from the Sun Bowl.  The organizing committee was looking to upgrade its status from a minor bowl to a major bowl. In the process of doing so, it had constructed the current Sun Bowl Stadium for the 1963 game. The new stadium would hold 30,000 fans. Previous games had been played at a much smaller stadium on the Texas Western University (University of Texas, El Paso) campus.

Oregon had initially conditioned its acceptance of the Sun Bowl invitation on a “suitable” opponent being found. The Sun Bowl committee was apparently considering Pittsburgh and Rice among other teams. A match-up with Pitt would have been an outstanding pairing. The Panthers were coming off a 9-1 season, their only loss to second ranked Navy. Why Pitt was not invited to the Sun Bowl (or any other bowl) is a bit mysterious. In any event, the Sun Bowl selected Southern Methodist University, apparently filling Oregon’s “suitable” standards.

SMU was coming off a 4-6 season, finishing sixth in the Southwest Conference. However, four of their games had been against teams that would go on to play in other major bowls. SMU had handed Navy its only loss of the regular season, and defeated an  Air Force team that would go on to play in the Gator Bowl. Perhaps the Sun Bowl committee chose SMU over Pitt in an effort to draw fans from Texas. An Oregon versus Pitt game might not have helped attendance, which turned out to be 26,500. 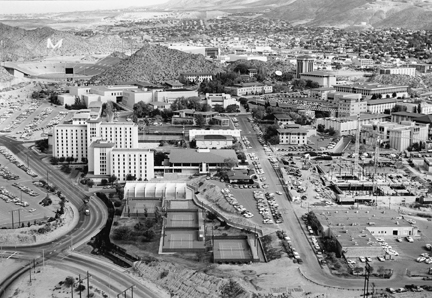 Once the Oregon team arrived in El Paso, the players started taking iron pills in an effort to combat the effects of the 4,200 foot altitude. The purpose of the iron pills was to build up hemoglobin in the player’s blood which would increase the blood’s ability to carry oxygen through the circulatory system.

Oregon took all 43 players who had played in games during the season to the Sun Bowl, although a number of them were injured and unable to play. Undoubtedly, the most serious injury was to Mel Renfro.

Several days before the Oregon State game, Renfro had severely cut his arm on the edge of a mirror. Surgery was required, and Renfro’s doctors advised him to not play any more during the season. Renfro would sign a contract with the Dallas Cowboys before the Sun Bowl game.

SMU would get the first possession of the game but could only move the ball three yards. Oregon would fare slightly better on its first possession, driving the ball from its own 34-yard line to the SMU 39-yard line, where the Ducks turned the ball over on a fumble. However, Oregon would get its first break of the game on the next series. SMU quarterback Mac White threw a pass into Oregon territory, where H.D. “Hurry Doc” Murphy intercepted the ball at the Oregon 30-yard line and returned it 49 yards to the SMU 21-yard line.

From there, Bob Berry would gain eight yards on a “keeper”. Larry Hill would gain five yards off left tackle.  Berry’s pass to Hill would be incomplete. This was a problem for the Ducks throughout the afternoon. Too many of Berry’s passes were dropped by his receivers. The next play saw Dennis Keller, Renfro’s replacement at left halfback, start outside then cut back inside for 10 yards and the touchdown.

Early in the second quarter, SMU managed to drive deep into Oregon territory. Murphy would kill that drive with his second interception on the Oregon 3-yard line. As Murphy, a star outfielder on Oregon’s baseball team would say after the game,”my job is to cover the middle, I go where the ball goes”. The Duck managed to get the ball out to the 8-yard line. Murphy then ran 49 yards to the SMU 43-yard line, where the drive would stall. 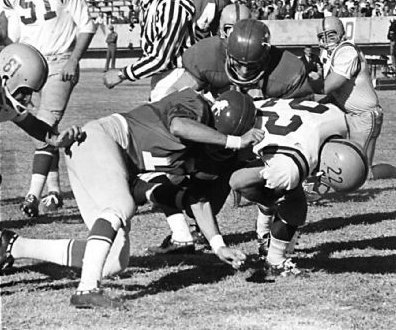 Oregon would get the ball back on its 35-yard line. The Ducks would cover 65 yards in nine plays, highlighted by the passing of Berry and Hill, who threw a halfback option pass to Dick Imwalle for 20 yards. Berry followed up that pass with a 23 yard pass to Imwalle in the end zone. Meister’s point-after-touchdown kick was good, giving Oregon the lead at 14 to 0.

Oregon’s final score of the day would begin with Oliver McKinney and Ron Stratten tackling Mac White causing White to fumble the ball.  Defensive back Ron Martin recovered the fumble for the Ducks on Oregon’s 36-yard line. Despite a number of dropped passes by his receivers, Berry was able to make four completions, the last to split end Paul Burleson for the final 20 yards and a touchdown.

Near the end of the first half, Oregon players were complaining to trainer Bob Officer that their throats were dry and they were having difficulty breathing. The altitude was adversely affecting the players, despite the iron pills. Those complaints would continue into the second half, and help explain why Oregon’s offense failed to score any more points. All Officer could tell the players was to suck it up.

Did SMU players have similar problems?

We really do not know but when SMU head coach Hayden Fry was questioned after the game he told reporters that they had given SMU players “energizing” pills at halftime. Fry denied that these were pep pills, they were just stimulants. Fry acknowledged that his players got stronger as the game went along.

Neither team was able to score in the third quarter. SMU would finally get on the scoreboard in the fourth quarter. Danny Thomas took over at quarterback for SMU and drove the Mustangs to the Oregon 3-yard line. Two rushing attempts gained no yards for SMU. Thomas then threw a pass to tailback John Roderick in the end zone. SMU was finally on the scoreboard. The Mustangs elected to go for a tw0-point conversion.  Lu Bain intercepted the conversion attempt, keeping it 21-6 Oregon.

Oregon would mount its only serious scoring threat of the second half when it drove from its own 38-yard line to the SMU 12-yard line. However, the Ducks drive disintegrated when they were called for a holding penalty moving the ball back to the SMU 28-yard line. Oregon was unable to move the ball and missed the field goal attempt. (Sounds like this season, huh?)

SMU would mount two other drives that ended with Oregon intercepting the ball. Lu Bain would intercept a Danny Thomas pass at the Oregon 17-yard line and return it 35 yards to the SMU 48-yard line. SMU’s fourth interception would come when defensive end Ray Palm intercepted a tipped pass intended for SMU’s Tom Hillary.

The final SMU score would come after Oregon went into a “prevent defense” to deny SMU any long passes. SMU took advantage of the situation to use a series of short passes to move the ball downfield. With the aid of a personal foul penalty on Oregon, SMU moved the ball to Oregon’s 15-yard line. At that point, Mac White replaced Thomas at quarterback. White ran for seven yards.

He then passed to Roderick in the end zone. Roderick caught the ball and the referee signaled a touchdown. Oregon’s Oliver McKinney protested the call, asserting that Roderick had been out-of-bounds when he came down with the ball. There was no instant play in that era. Apparently, McKinney contested the call a little too vociferously because he was ejected from the game.  White would run for the two-point conversion.  Oregon 21 SMU 14. There were only 24 seconds left on the clock. SMU attempted an onside kick that rolled out-of-bounds. The clock expired with an Oregon victory.

Following the game, Casanova expressed his view that his team was not as well conditioned as they could have been, not using the altitude for his team’s second half performance. While not being happy with the play of his defensive ends, Casanova did praise his interior line, particularly Dave Wilcox and Ron Berg for their play.

Wilcox would sign with the San Francisco 49ers immediately after the game. While most of the team flew back to Eugene following the game, Wilcox, Imwalle, Hill, and Milt Kanahe flew to Honolulu to participate in the Hula Bowl game. Wilcox would also participate in the Coaches All-America Game and College All-Star Game. Renfro would also play in the College All-Star Game.

The Sun Bowl would be Casanova’s only bowl victory at Oregon, having previously lost to Ohio State in the 1958 Rose Bowl and Penn State in the 1960 Liberty Bowl. His 1959 team actually had a better record but received no bowl invitation. The 1964 team would go 7-2-1, but receive no bowl bid because it had joined the PAC-8 conference and was only eligible for the Rose Bowl.