Despite several reports to the contrary, the Chip Kelly Oregon offense is alive and well in the NFL!  The Eagles’ offense we saw go up and down the field in South Philly this fall bore a strong resemblance to the Oregon offense I studied from 2008 to 2012.

Operating out of the shotgun and rarely huddling, the Eagles led the league in rushing, were second in total offense, fourth in scoring and set an NFL record for explosive plays (of 20 yards or more) in one season.  The ‘college offense’ (and coach!) who was predicted to fail at the highest level of football, instead enjoyed record-breaking success . . . and did so with an offense Oregon fans easily recognize.

On top of winning the NFC East, Chip Kelly’s Eagles also introduced the No-Huddle, Zone Read and Packaged plays to the pro football fans of Philadelphia.  Combining his base run plays with both quick screens and passes, the scheme helped the Eagles clear the way for LeSean McCoy to lead the NFL in rushing.  This article will show how both the Eagles and Ducks combine packaged plays with motion, personnel and formation, to stretch defenses from sideline to sideline. In the opening series against the Chicago Bears, the Eagles lined up with a running personnel group (2 TEs, 2 WRs, 1 RB) but in a passing formation.  Kelly split out two tight ends wide to the left, leaving an attached tight end and wide receiver DeSean Jackson (No. 10) to the right.  Kelly then brings DeSean in ‘orbit motion’ (‘orbiting’ the receiver around the quarterback and running back) changing the formation for a one-back to a two-back look, and at the same time start to run an Oregon Duck staple — the packaged play. Kelly is running a ‘packaged play’ that spans the entire width of the field — a Bubble Screen to the ‘orbit motion’ runner to the left, packaged with a ‘pin-and-pull’ outside run ((what Charles Fischer (FishDuck) calls ‘Sweep Read’)) to tailback McCoy to the right. The ball can be thrown to the bubble, handed to the tailback or even pulled by the quarterback.  The reaction of the defense (and subsequent decision made by quarterback Nick Foles) will determine who gets the ball.

When Jackson begins his motion, the Bears’ defensive back responsible for him in man coverage, follows the orbit motion.  The motion helps Foles identify the Bears’ defense prior to the snap.  Once the corner runs with Jackson across the formation, it allows Foles to eliminate the Bubble from the package.  The motion also removes a defender from the pin-and-pull side, improving the Eagles numbers and leverage at the point of attack.

Look at “Blocking Down.”

The pre-snap end-zone view shows why coaches call this version of outside sweep the ’pin-and-pull.’  The front-side tight end (No. 87) and tackle (No. 65) will look to ‘pin’ the defensive lineman over them inside — away from the sweep.  Meanwhile, the right guard and center will pull around the two down blocks and set the edge for McCoy.

The left guard (No. 69) is responsible for cutting off the nose-guard.  The backside tackle (No. 71) climbs to block the B-Gap and will most likely block the Will linebacker (who is also scouting the quarterback in this defense).  [Note from FishDuck: “The B gap is between the guard and tackle on the left side.  The ‘Will’ LB is the Weak-side LB.”]

Foles is ignoring the Bubble Screen when he sees the corner travel with the orbit (black arrow) and ready to read the backside defensive end.

The Zone Read of the DE.

At the snap, Foles reads the dive player (Dive defensive end Julius Peppers).  Peppers is too far behind the play to stop the outside run, so Foles gives the ball to DeSean.  The Will linebacker is also slowed down from his quarterback responsibilities.  This hesitation allows the left-tackle to climb and block the Will.  The down blocks by the tight-end and right-tackle clear the way for the pullers to get out ahead of McCoy. 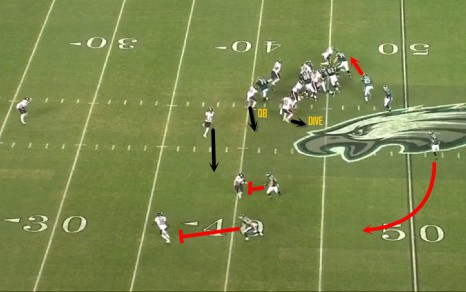 The wide view after the hand-off shows how the ‘orbit motion’ moved the Bears’ man-coverage defense to the orbit side.  The Eagles have successfully used motion, personnel and package to run the ball into a good defensive look.  The Bears’ urgency to stop the Bubble Screen to the left has exposed their flank to McCoy on the right.

Even after McCoy has been handed the ball, the backside defenders in the Bears front seven are concerned about the zone read responsibilities.  Both the dive and quarterback players (orange) are removed from the play by the excellent job of Foles carrying out his fake.  While the ‘pinners’ have finished their down blocks, the ‘pullers’ have set an edge, allowing the NFL’s leading rusher to get out in space. The Eagles ran this exact packaged play with the same personnel and formation later in the same quarter.  This time the Bears’ defense is in a zone Cover 3 look.  When the orbit motion begins, the corner to the right of the offense stays backside (black arrow).

This allows the Bears to have an extra defender to the ‘pin-and-pull’ side of the package.  However, by not chasing the orbit, the Bears have left only two defenders to the Bubble side.  Kelly lines up his tight ends to the field side of the hash marks for this precise situation – so his big guys can beat up little guys (DBs), while also getting the ball to Jackson in space.

The pre-snap end zone view shows the corner to the right (yellow box) staying home when the motion begins.  This adjustment by the Bears’ defense gives them an extra defender to the right of the defense.  Foles sees this change in coverage and knows he will have numbers to the Bubble side. Against a Cover 3, you can see the Eagles have two blockers for two of the defenders on the field.  The only free hitter/unblocked player to the bubble side is the free safety, who is lined up on the goalline. The Bears’ defense is loaded up to stop the ‘pin-and-pull’ that gashed them earlier.  The Bears are exposed to the left, and Foles makes the proper read delivering the ball to the Bubble.  The Eagles’ tight-ends use their size advantage against the smaller Bear defenders to set an edge for the Bubble.  Once again a Chip Kelly/Oregon packaged play has used the entire width of the field and stretched the defense to its limit! Against Stanford this past season, the Ducks ran a similar packaged play to stretch the nationally-ranked Cardinal defense.  One slight difference is the alignment of DeAnthony Thomas (DAT).  The Ducks start the play in a two-back look with DAT as the right halfback position — creating a Bubble to the left, packaged with an Outside Zone Read to the right.

The numbers are shaping up nicely . . .

The Stanford defense reacts to the orbit motion by removing a defender from the box (No. 17), leaving five defenders in the box and a deep corner (yellow box) as a free hitter to the outside zone side. When the ball is snapped, four Stanford defenders (black arrows) rush to the Bubble side.  With the backside defensive-end playing the quarterback (orange arrow), the Ducks have numbers to the Outside Zone Read side.  Great blocking by the Oregon offensive line (red box) leaves only the deep corner of Stanford to tackle the running back.

The end-zone view of the play after the snap shows all five Stanford defenders in the box being blocked when the running back gets to the line of scrimmage.  Four of the five Oregon blockers have turned the  Stanford defenders away from the play, setting an edge and creating an opening for the tailback to run through. Huff in the backfield!

Later in the same game, Mariota demonstrates both his savvy and understanding of the offense.  The Ducks line up two wide receivers to the left and one to the right with two ‘backs’ in the backfield.  This time wide receiver Josh Huff is lined up as the halfback to the left and orbit motions to the field.  Before the snap Stanford has three defenders lined up to the bubble side.  Mariota sees this look and progresses to his Inside Zone Read.

Stanford ready for both?

The Cardinal line up with three down lineman and six defenders in the box.  Like most three down fronts, this is not a stagnant look from the Stanford defense.  The backside defensive end will attempt to confuse the quarterback’s read by slow playing at first and then attacking the dive late.

At the snap, the Oregon offensive line works to block their play-side gaps.  The Mike LB (No. 11, black arrow) runs through the backside B-gap and is picked up by the left tackle.  The back-side end goes up field first, then redirects toward the dive forcing a pull. After pulling the ball , Mariota goes back to his bubble read.  While the pre-snap numbers for the Bubble weren’t there, the Zone Read has frozen the third Stanford defender (yellow box) and forced him to give up leverage to Huff on his orbit motion. Seeing this change in perimeter leverage, Mariota throws the ball out to the Bubble. On the edge, the Duck receivers work their patented perimeter double team on the alley defenders.  When the field corner drops deep third (black arrows), the Ducks outside wide receiver stays patient and square.  When the strong safety drops down into the alley, both Duck receivers are in place to double the strong safety up to the bailing corner.  [FishDuck note:  ”I usually have to do some ‘simplifying’ of the terminology written by the coaches.  See if you can follow what he wrote!”]

Over the course of time, the differences in the Philadelphia and Oregon offenses will become more pronounced.  With different players and play-callers these two teams will develop their own unique ways to attack a defense.  It will be great fun to watch how the different branches of the Chip Kelly coaching tree continues to evolve.

In the meantime, it is exciting to see how similar game-plans have similar success at the highest levels of football.  While this is certain to change over time, we will always be able to see the underlying philosophy that connects the two!

From Philadelphia . . . “Oh how we love to learn about your beloved Ducks — and our Eagles!”