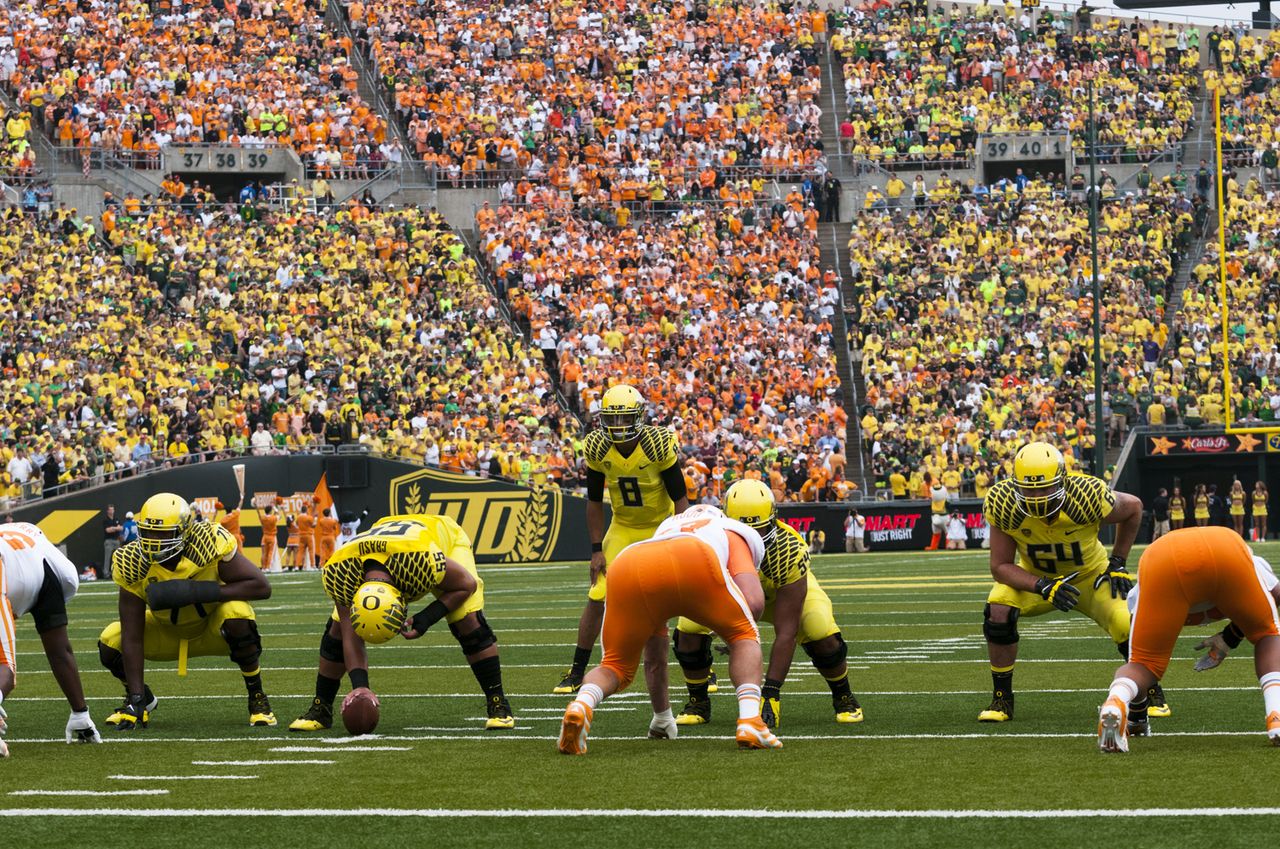 One reason I love the style of offense that Oregon uses is that it makes so much sense. In the old days, it wasn’t uncommon to hear football coaches say things like, “I don’t care if they put 14 guys in the box, we’re going to run the ball and they’re going to have to stop it!” Since that time, however, conventional wisdom has been moving in the opposite direction. And most coaches these days are interested in trying to make it as easy as possible for their offense to move the ball down the field. The question that’s often heard in game planning sessions is “How do we make sure the defense is always wrong?”

Let’s take just one example of one of the most basic plays there is, the zone read. If you’ve been a reader on this site for any length of time, I’m sure you’ve seen this play, or some variation of it, dissected over and over again. But now we’re going to go beyond the basics. Once you’ve learned the differences between the inside zone and the outside zone and you’re able to recognize the same base plays that an offense has in its arsenal, the next step on your way to understanding football is learning why they run them.

As I say in my book, the play is designed to make sure that whatever the defense decides to do, they’ll be in the wrong place; they’ll be playing too timidly and with too much hesitation, never sure if what they think they’re seeing is what’s really going on.

1. Count the men in the box

This one sounds obvious, but the process is a little more complicated than you might think. Let’s look at the diagram below, for example. Six men in the box.

Obviously, the numbers are in the offense’s favor. There are six blockers for six defenders. In this case, the QB wouldn’t read anything. The right tackle would block the end and the offense will have a man for a man. If you’ve got everyone blocked and can’t get four yards, that’s when you have a problem. That’s the basic stuff.

The offense has a man for each defender in the box.

Now look at the next picture.

Seven defenders in the box.

The fun part starts when a seventh defender gets into the box. Offenses toy constantly with ideas on how to run the ball when they are “outnumbered” in the box. One of the best ways to even the numbers is by not blocking one of the men, but reading him instead.

Still, when you look at the picture, it doesn’t look great for the offense. Even if they’re able to run the zone read successfully a few times against a seven-man front, the defense will adjust, so what do you do next?

This offense is built around the idea of getting your players to play fast, which has less to do with a player’s 40 time, and more to do with how well he knows his assignment and how quickly he can get there. It also has to do with forcing the defense to play more slowly. By getting defenders to hesitate, this offense beats defenders to the punch time and time again.

One of the best ways to do this is to create some confusion in the backfield. In this day and age of spread offenses, seeing two running backs in the backfield is increasingly rare. By giving the defensive front another man in the backfield to defend, you’ve basically made the whole playbook available to your offense and you don’t have to rely on your QB as much to generate your run game. It also allows you to create some great misdirection scenarios, like in the diagram below. The misdirection freezes the inside linebackers and gets the offense out on the edge in a hurry.

I’m sure you know the basics of this play. The QB will read the unblocked defensive end and react accordingly. If the end closes to follow the dive back, the QB will keep the ball and attack the inside shoulder of the linebacker. Or he can pitch the ball to the other back if he feels threatened.

Just the appearance of the two running backs criss-crossing in the backfield forces the defense to stop and hesitate for half a second so that they don’t lose sight of the ball. This is a simplified description of what goes on during this play, but what is important is to understand the reasons why the offense is doing what they do. If the defense has shown they’ve committed seven men to the box no matter what, the offense still needs to be able to run the ball occasionally, especially in short-yardage situations. Using the option run game with misdirection allows them to set up the rest of their ground attack and keep the defense off balance.

The great thing about this offense is that Oregon can run a similar look with backs crossing in the backfield and it could be a totally different run play or even a pass.

Still, there are times when you may want to throw the ball and the QB may not even know it until after the snap. If the QB doesn’t like what he’s seeing, he has the ability to throw the ball to a quick-breaking receiver.

For example, in the diagram below he sees a blitz coming off the weak side and doesn’t have a potential pitch man in the backfield. In other words, even if the QB pulls the ball on the zone read, there’s still a defender waiting there for him. That’s the kind of math that doesn’t add up.

The offense can do a couple of different things here. If the QB wants, he could still hand it off to the tailback and count on him picking up a couple of yards before the unblocked end comes from behind and tackles him. This isn’t the worst idea in the world and it minimizes the risk involved. But, there’s also another option available.

The QB can also throw the ball to the backside receiver, who should be one-on-one against the corner. When running a quick hitch, the receiver should be just turning around when the ball gets to him. If he can beat his man with a quick move after the catch, he has a great chance to run down the sideline for a huge gain. Even if he gets tackled, it’s still about a five-yard gain.

These days more and more offensive coordinators in college football take pride in not forcing too much and trying to attack where the defense is weakest. The danger for offenses, however, is that defenses may be able to dictate what they want offenses to do by giving them certain pre-snap looks. By having a Plan A, Plan B and Plan C for running the ball against a defense that’s loading the box with defenders, offensive coaches can keep their opponents off balance and keep them guessing as to what’s coming next.