The Oregon Ducks are proud members of the Pac-12 conference and have been, with the exception of five years in the early sixties, since it was known as the Pacific Coast Conference. So how did we get from the PCC to the Pac-12?

The PCC added another two teams in 1922 with the addition of the University of Southern California (USC)and Idaho, followed by Montana in 1924 and the University of California at Los Angeles (UCLA) in 1928. After the dust settled on the expansion of the conference, the PCC split into two divisions for basketball and football. The Northern division had all six Pacific Northwest schools while the Southern division had the four California schools.

While the rest of the conference seemed happy with its members, Edwin Pauley (the Cal regent at the time) hated the inclusion of the Oregon and Washington schools because he felt they didn’t compare academically. Along with Cal president Robert Proul, Pauley pushed for a conference consisting of just the California schools and pushed for higher and higher academic standards in the PCC. As a result of that, the PCC was the first conference to look at academic player eligibility and to adopt a code of conduct. And to that end, USC was suspended from the conference in 1924 for violating that code. 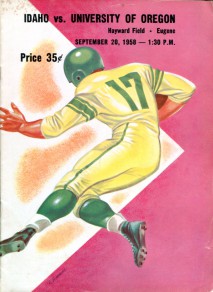 In 1950 the Montana Grizzlies, who had been noncompetitive for most of the conference’s history, left for the new Skyline conference, reducing the PCC to nine teams. After the Grizzlies departure, the end of the PCC was set into motion. Most of the conference was dependent on the state of California for its big time recruits and this started to show when UCLA built itself into a powerhouse program, going 34-5 from 1952-55. The Bruins utter domination of the conference wasn’t the only burr under the Pacific Northwest schools as the rest of the top half of the conference consisted of USC, Cal and Stanford.

The end of the PCC was near and was preceded by the first true booster scandal. In the late 40s and early 50s, the schools in the conference started forming alumni groups in areas to help locate and “catch” potential recruits. To do this, the alumni groups would entice the recruits with offers of jobs – something that was not against the rules at the time as long as there were actual jobs for the players and had a max wage of $40 per week.

It all started falling apart when Washington’s third-year head coach, John Cherberg was fired after his players refused to practice or play and demanded he be fired. Cherberg, in response to his firing, started talking about the Greater Washington Advertising Fund, a booster group which helped players find jobs and often gave them wages in excess of the $40 per/week mandated by the conference. Photo of the 1947 University of Oregon football coaching staff taken at Hayward Field.

When the NCAA gave the entire Washington athletic department a two-year postseason ban and was looking for other troubling PCC activities, the Huskies, alongside the Oregon Ducks who’d been touched by the scandal a year earlier, pointed the finger at the UCLA Bruins. The first piece to fall in Westwood was the March, 1956, article by two LA reporters who had talked to a former UCLA player – who was now at Cal. The Bruins were able to stall the investigation for two and a half months by refusing to give the NCAA or any reporters access to the clubs.

UCLA finally let both the NCAA and reporters in by admitting that the entire athletic department had been aware of booster payments for years and had in fact pointed players towards the boosters. The two booster clubs associated with the Bruins were the Bruin Bench and the Young Men’s Club of Westwood. The Bruins implicated USC and Cal by revealing the real purposes of the Southern California Educational Foundation and the San Francisco Gridiron Club, respectively.

The most severe sanctions were handed to USC and UCLA, who both received three years of postseason bans and television bans, as well as severe scholarship reductions from the PCC. Cal’s punishment was slightly less severe with a two-year ban instead of three. This was the beginning of the end for the conference because the California schools didn’t take well the fact that they were being punished by what they thought of as the bottom dwelling, less academically inclined Pacific Northwest schools.

Cal’s president Proul used this opportunity to create what was referred to as the five-point plan for academic excellence at UCLA and Cal, which included a separation from the PCC. The conference disbanded by 1957 and officially came to a end in 1959.