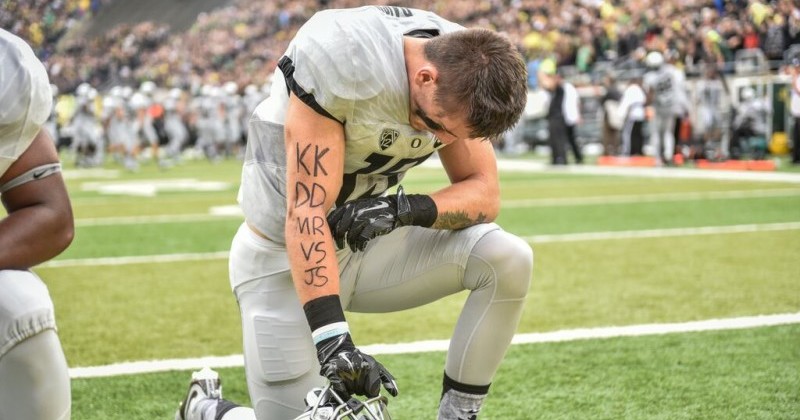 I won’t lie, it was hard. I stood nine rows back on the 20-yard line, surrounded by my fellow students and friends, watching the Ducks let opportunity after opportunity slip out of their grasps. We were wet and cold, but simultaneously numb to all other feelings but that of overflowing anticipation for the next snap.

Would this be the down the Ducks defense stepped up and created a turnover? Would someone besides Royce Freeman make a play for the offense? Would Uncle Phil strap on a helmet and prove he truly is a God amongst mere mortals?

To be concise, no. No, nope and noperino. It was like a horror film where you wanted to scream at the girl to not go into the closet, but she can’t hear you because, well, she’s in a movie and if she didn’t check the closet, it’d be a pretty boring horror flick.

But instead of one girl, it was a crowd of more than 55,000 people waiting, hoping, for something to believe in. Something to remind them of the team the Ducks were less than one year ago.

But, just like in the movies, we didn’t leave. We sat there, all game long. We checked the closet.

So, this is it. This is the lowest the team has been in a while, and as fans I understand the itch to find something to cheer for again. So what, if anything, can we still cheer for?

Well, here are a few things that, for me at least, still give me hope. I could get into the lengthy debate about Ty Griffin‘s decision to switch positions, and how every day I wish we could see what he would be like under center, but for now I’ll have to settle with his younger brother.

The younger Griffin has been phenomenal so far in mostly limited play time, but he really took the WSU game as his opportunity to shine.

With wet conditions and undeveloped quarterbacks, the running game was in full effect against the Cougs, with Griffin and Freeman front and center. Freeman was phenomenal, putting on an absolute clinic against the weak Cougar defense. But we all knew Freeman was great.

What we didn’t know was that Freeman has a pretty great backup, too. On 11 carries, Griffin tallied 96 yards rushing, displaying an uncanny combination of balance, strength, but most of all, speed. Griffin’s speed looks almost cartoonish and guess what? He’s just a freshman. Forget the fact that, as my friend and fellow FishDuck writer Kim Hastings pointed out, it wouldn’t have mattered if Oregon had 11 or 18 guys on defense. They still wouldn’t have been able to cover the Cougars’ receivers.

It’s true, the secondary is weak. But, as a glass-half-full type of guy, I sure loved watching the defensive line.

Led by DeForrest Buckner, the D-line provided some huge plays all game long. Sometimes the ball doesn’t bounce your way, and that was especially true while watching some of the rushed passes Luke Falk made.

Falk got away with multiple bad throws, but none more so than a terrible throw while being dragged down that fell harmlessly to the turf. The D-line brought it, now it’s up to the rest of the team to catch up to them.

I know, I know. It was a tough game, okay? I don’t have a whole lot to be optimistic about, but even I have to admit the Lewis and Clark jerseys were sweet. Win or lose, we’re going to look good while doing it.