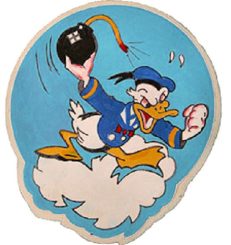 Bombs away! The emblem for the 531st Bombardment Squadron of WWII.

Listening to my adversary’s closing argument this week, I suffered a moment of déjà vu clarity; one of those moments where you realize you just relearned a lesson you already knew.

Everyone has a “tell.” We can train, practice and strive for self-improvement, and sometimes succeed, but we cannot escape that which we have made normal. When someone shows you, repeatedly, who they are, it’s usually best to believe them.

So we turn to Duck head coach Mark Helfrich who has repeatedly underwhelmed and tells us “it’s on him.” I believe him. Baby steps to a little bit of improvement are not the goal. Brilliant flashes of athleticism do not improvement make. Oregon has great talent, there can be little question about that. Jerry Thompson correctly diagnoses the issue as one of leadership and culture.

Hefrich’s apologists – sometimes implicitly, sometimes explicitly – mount their defense on the athletes under the bus, which I submit is entirely objectionable. Our own Chief, the FishDuck himself, asks us to consider the Good-or-Good. For the time being I remain focused on the lose-lose: the opportunity cost of the status quo is  to delay the inevitable reboot. So we continue to ask, if not now, when? And, if not Helfrich, then who? The target of our rhetorical incendiaries.

To date, the Pro-Change camp, at least on this web site, has proffered few names. I’ve argued Nick Aliotti deserved an apology and the opportunity. In my last column, I offered my own apology of Art Briles and suggested he should be a viable candidate.

[Update to interested readers: the defense in Hernandez v. Baylor has moved to dismiss Plaintiff’s Second Amended Complaint’s common law negligence and intentional infliction of emotional distress claims against Briles and former Baylor University Athletic Director Ian McCaw, which generally assert that Briles and McCaw knew about Tevin Elliot’s prior bad acts and had a duty to protect Plaintiff and “similarly situated other students.” These are tough arguments to make, but this is a football column not a legal opinion.]

Then last week, FishDuck.com’s own Graham Berry joined the fray and proffered Tom Herman for 2017. I love the idea. Herman would be a great match for Oregon’s erstwhile WTD culture. I do see some practical problems inducing him to leave Houston but his is a name that should certainly be on Rob Mullens’ short list. Ed Warinner was co-OC and OL coach in 2014 when the Bucks bested the Ducks.

There happens to be another candidate right behind Herman that only recently has been the target of coaching scuttlebutt: Ed Warinner. Here’s a coach with more than three decades of experience. He “co-coordinated” Urban Meyer’s offense with Herman for three years. Since Herman’s departure, he’s dropped the “co” from his title.

I like Warinner. A lot. He has coached OL for most of his career which, like it or not, is the piston that drives the engine that makes the Pretty Car Go Fast.

He could seamlessly segue from Ohio States’ power spread into Oregon’s run-first blur. My syllogism for your consideration: if games are won and lost in the pit, and the pit is in your blood, then winning is in your blood. I think Warinner will make a brilliant head coach. Winning is in his blood, and he’s on my list.

The downside: We’d all be more comfortable handing the keys to a candidate who has spent some time in the wheelhouse at some level, barking orders, patching holes and reading the sky when the weather turns foul and seas get rough. My guess is that he will soon follow Herman to a non-Power 5 conference. That’s the traditional progression. If not a helm, what’s his incentive to jump from Meyer’s ship to patch another? What about another coach Kelley? One of our intrepid readers, Cody Rodenhuis - who appropriately reminds us to “Take risks: if you win, you will be happy; if you lose, you will be wise.” – added some keen insight by introducing Kevin Kelley to the conversation. The other coach Kelley is an exciting and nearly eponymous prospect who now heads the Pulaski Academy Bruins of Little Rock, Ark.

He, in a word, is amazing. A football coach who quotes Sun Tzu seems about as rare as a frugal attorney. (What’s the difference between a good lawyer and a bad one? Answer: A bad lawyer’s mistakes will make your case drag on for years, a good one will take his time.)

Coach Kelley has built a football program on a Harvard professor’s statistical analysis of 2,000 football games, which demonstrated going for it on 4th down, irrespective of all other factors, generates more scoring opportunities, extends drives and, statistically, is the better approach than ever giving the ball away. In the last 12 seasons, coach Kelley’s Bruins have punted fewer than one time per year, have gone 138-25-1 and grabbed four state titles. The other coach Kelley is also a genius.

An intelligent rebel to convention, he dissects fundamentals and asks why.

For example, he always onside kicks because he’s determined they can win the ball back more than half the time. His boys tirelessly pursue – and prove – the obvious and direct correlation between scoring opportunities and scores.

He’s an innovator, a thinker and unless he exclusively loves coaching 16-18 year-old Arkansians, someone is going to tap him to run their NCAA offense. And that’s the issue. His name is on my list, but as exciting as he is, if I’m the slightest bit hesitant about the idea of offering him an Power 5 helm, I suspect Mr. Mullens would be too.

That said, I say his name at least belongs on the OC list (which leads to the curious idea that change may actually save Helfrich’s job), but were it on the HC list I would accept Mr. Rodenhuis’ advice and go for it.

Perhaps more importantly, fixing the holes by aiming at the offense doesn’t at all address the fact that the Ducks are taking on water from both sides of the ball.

“Not for nothing” is a New York expression or, perhaps more accurately, a disfluency. It means “also,” or “ya’ know,” and lets your audience know that you have a point to make. It used it irritate me to no end. It has since burrowed itself into my brain proving, once again, that the best way to hit a rock is to aim for it.

So, not for nothing, while it may be easier to spot prospects on the offensive side of the ball, Pete Carroll came from the defensive side himself. He’s not a bad archetype. Aggressive. NFL experience. Ambitious. Wanted his own helm. In two weeks, after we have results from USC and Stanford, we’ll start looking on the other side of the ball and address the interim apologies from the Helfrichites.