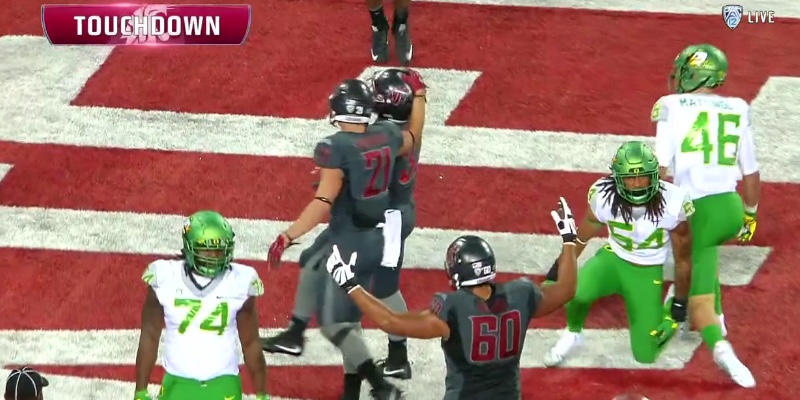 The Grizzled Ol’ Coach, Mike Morris (a frequent contributor to FishDuck.com), has educated Oregon fans and me enormously with his wisdom and brutal honesty. He is suggesting a major change for the Ducks, but do remember that we have many guest coaches as writing contributors and their opinions could be different than the GOC as do the other writers and editors. Please read it slowly and absorb the gems in every paragraph … Charles Fischer

I wrote most of this article last week – before the recent Saturday Night Massacre. In it I speculated about a “possible” defensive coaching change. Well… I’m thinkin’ things just might have changed a bit since that Pullman disaster. But I think some of my original points are still valid, and hopefully my not speaking with over-reactive anger can help us, as Duck fans, hang in there.

Oregon may need a coaching change, but these aren’t the only dire times in Duck football history. For those of you who don’t know or remember, let’s talk about a couple of other years when it seemed a catastrophic football season was about to occur.

Former Oregon coach Nick Aliotti told about the 1994 season at a Ducks’ coaching clinic: After getting beaten badly by Utah 34-16, and Hawaii 36-16, head coach Rich Brooks and defensive coordinator Aliotti knew they were in big trouble heading into the Pac-8 season. They had been playing “conventional,” predominantly conservative zone “bend don’t break” defense. One of the great ones-Alex Molden

And they decided to say, “Fuck it!  If we’re going to lose, let’s at least have some fun and be the ‘predator not the prey.'” (Those last words are my updated paraphrasing of the actual words.) The Ducks’ defense went to almost totally man-to-man defense, with a whole lot of blitzes.

They had a great, though at-the-time unheralded, secondary [Chad Cota, Herman O’Berry, and a couple of kids named Alex Molden and Kenny Wheaton], thus “Gang Green” was born. The offense was benefiting from the new defensive attitude and the success stepped-it-up. And a conference championship and Rose Bowl appearance followed.

John Neal talked about the 2006 season, also at a Ducks’ coaching clinic: The Ducks had a [according to coach Neal] horrible 2006 season, culminating in a humiliating Las Vegas Bowl loss to BYU 38-8. The players didn’t particularly like or have much confidence in the coaches, and vice versa.

After judging all facets of Oregon’s football program for a few weeks, Kelly spoke up at a coaches’ meeting and said, “This program is really fucked-up.” Bellotti asked him why, and asked if Kelly had any ideas on how to improve things – Kelly had a whole list of ideas; most were implemented, with help from player suggestions. And not just the Blur Offense (with an incredibly improved Dennis Dixon at QB) was created, but a whole change in the Duck culture, from how they practiced to how they recruited.

You know the rest of that story.

Why bring up those blasts from the past? To show that bad times can be gloriously overcome without unnecessarily firing the head coach and tearing down the good, solid foundation that’s been laid.

Even talking about firing Mark Helfrich is ridiculously irrational. He’s one of the best offensive coaches as there is in America, and has the perfect personality to lead the Oregon football program. A wonderful blend of the best of Brooks, Bellotti and Kelly, I still think Helfrich’s total package is better than the other three (whom I greatly admired). Duck fans are so very fortunate to have him. So, why are the Ducks so bad now? They aren’t. As badly as they’ve played, they were two plays away from being undefeated, with an inept defense against two very good opponents-until that disaster Saturday night, much of it brought on by the brilliant play of the Cougs. And the Ducks have weathered past other disastrous games such as Arizona in 2014 and Utah last year.

And you all should remember the “could-haves-with-a-healthy-Vernon” from last year.

If you were judging the Ducks’ offense as if it was some other team’s offense, we’d be VERY impressed, especially with “rookies” at QB and most of the offensive line. But Oregon fans suffer from:

The offense itself greatly suffers from those two things. They put too much pressure on themselves because of unrealistic offensive expectations and a very realistic fear that if they don’t score almost every time they have the ball, they’ll lose the game. An offensive team shouldn’t have to score at least 40 points each week to be considered good/adequate.

Dakota Prukop wants to be better than Marcus Mariota and Vernon Adams – in every series.  That self-inflicted pressure can lead to missing open receivers. So now LACK of confidence has been added to the offensive players’ ability to execute. Self-confidence is a tough element to get right. Both too much and too little can hurt players’ ability to do things right.

But the defense… ah, the defense. While I hate stupid, misguided criticisms, coaches should definitely be held “accountable” for the way their teams play. As much as I admire Helfrich, he’s made two big-time wrong decisions:  the hiring of Don Pellum and Brady Hoke as defensive coordinators.

I understood and agreed with the Pellum decision when it was made. Who knew? There are many great football coaches who would be incapable of being good coordinators. And Helfrich got out of that awkward situation as well as he could. Brady Hoke has got to get them going…

With Hoke, I was skeptical when he was hired. I knew a lot about him and didn’t like what I knew. But I drank the Kool-Aid; I trusted Helfrich. Maybe Hoke had re-invented himself – learned a better way of coaching defense – in his season off. Nope. I got the Hoke I originally expected. Oh, he can certainly talk the talk, but he seems to have actually made the Oregon defense WORSE. Maybe the worst since 19??

Does anyone out there seriously think the Oregon defense can significantly improve during this season? It just ain’t happening. Hoke just isn’t that good a coach. A great/very good defensive coordinator has a “system,” a way of playing defense that allows players to develop to the maximum of their abilities. I’ve given Hoke sufficient transition time-and excuses. My easy verdict: he doesn’t have such a system.

And it’s not just because those other defenses obviously have better players than the current Ducks; it’s the fast, aggressive, un-confused way their players play. Oh those other teams’ defenders will occasionally get out-executed, but they will almost never be confused. Having consistently confused players is the worst coaching sin. “It’s not what you do, but HOW you do it.”

And Hoke uses his base 4-3 only part-time. He wants to confuse the offense – not out-execute them – and instead, he only confuses his own defensive players. Almost every big play given up by the Ducks this year was against the flawed execution of a scheme other than the base 4-3.

My favorite defensive coordinator, Pat Narduzzi, formerly of Michigan State, who basically invented this “4-3, Cover 4” scheme that those others have “borrowed,” is now the head coach at Pittsburgh. His defensive team plays exactly the same relatively simple but thorough system he used at MSU. Pitt doesn’t have the talent or experience to get the same effectiveness, but, mark my words; Pitt will soon be one of the best defensive teams in the country because of how Narduzzi precisely teaches his system. He’s more concerned with properly teaching his players than trying to fool his opponents. So where does the Duck defense go from here? There are no great/very good players who will suddenly emerge, and probably no brilliant coaching schemes to turn things around. Because of injuries and psychological trauma, the Ducks have a better chance of getting worse than better.

Another change will have to be made in the off-season. Could Hoke re-invent himself with a new defensive system?  It’s highly unlikely, although Justin Wilcox seems to be reinventing himself at Wisconsin. But Helfrich almost surely will need yet another defensive coordinator, and that new DC might want to bring in his own assistants. Good people might have to go. Shit happens.

If a new coordinator is deemed necessary, it must be done. It’s rational, courageous accountability. Bellotti had to replace three coordinators (Gary Crowton, Andy Ludwig and Rich Stuber), and now he’s in the Hall of Fame. Urban Meyer, even with all his success at Ohio State, hired a new defensive coordinator, in 2014, to implement the Michigan State 4-3. That resulted in a National Championship for his Buckeyes, and an even better defense the following year.

After a 10-3 season in 2015, Jim Harbaugh of Michigan fired his defensive coordinator and hired the highly successful DC from Boston College in install the almost-exactly-the-same-4-3 system as the Spartans and Buckeyes. It was almost beautiful watching them defend Wisconsin.

How people deal with adversity – their mistakes and setbacks, is often the most important aspect of their lives. Hopefully, we’ll look fondly back on these painful days and joyfully think how much Oregon football has improved from its present adversity.

The Grizzled Ol’ Coach wants to help us as fans learn football as opposed to just complaining about the results. Thus he will be teaching us the fundamental rule for the 4-3 defensive line play in the Tuesday analysis–and consequently we will see what Oregon is doing wrong from examples in the Washington State game.