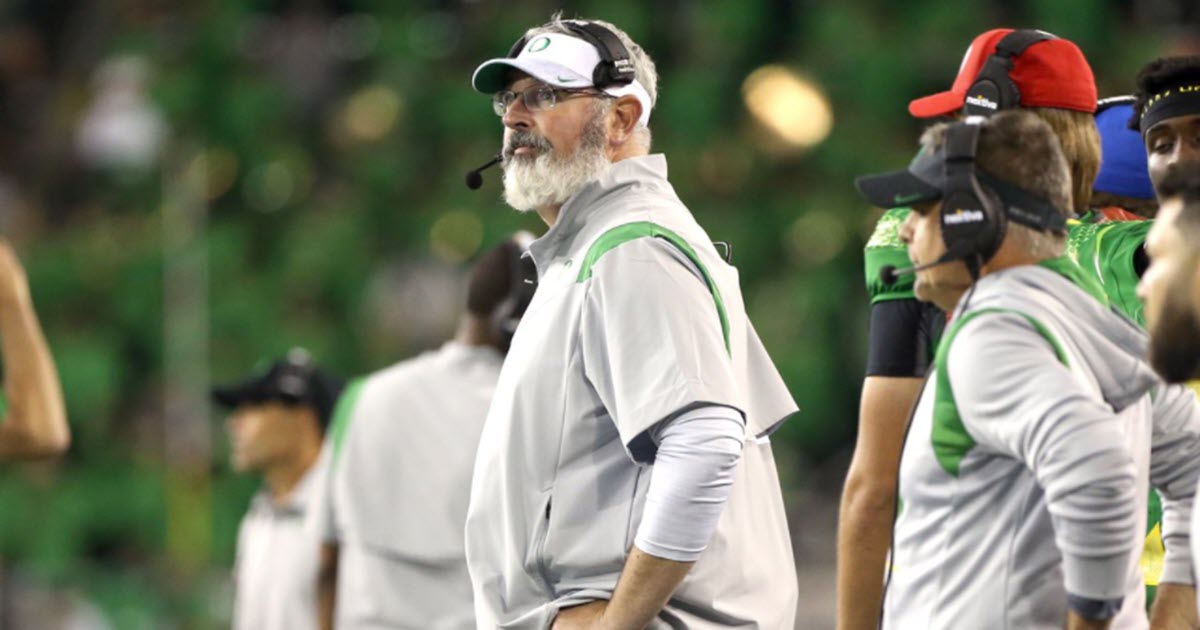 It’s that time of year again for the Oregon Ducks. A successful season has led to a possible head coaching opportunity for one of Coach Mario Cristobal’s coordinators. It is being reported that Coach Joe Moorhead is the top target for the vacant spot with Akron Zips. Though he has yet to accept the position, and I sincerely hope that he stays with the Ducks, I figured it would be fun, as a community, to discuss possible candidates as his replacement. Here are seven coaches who could be up to the task. 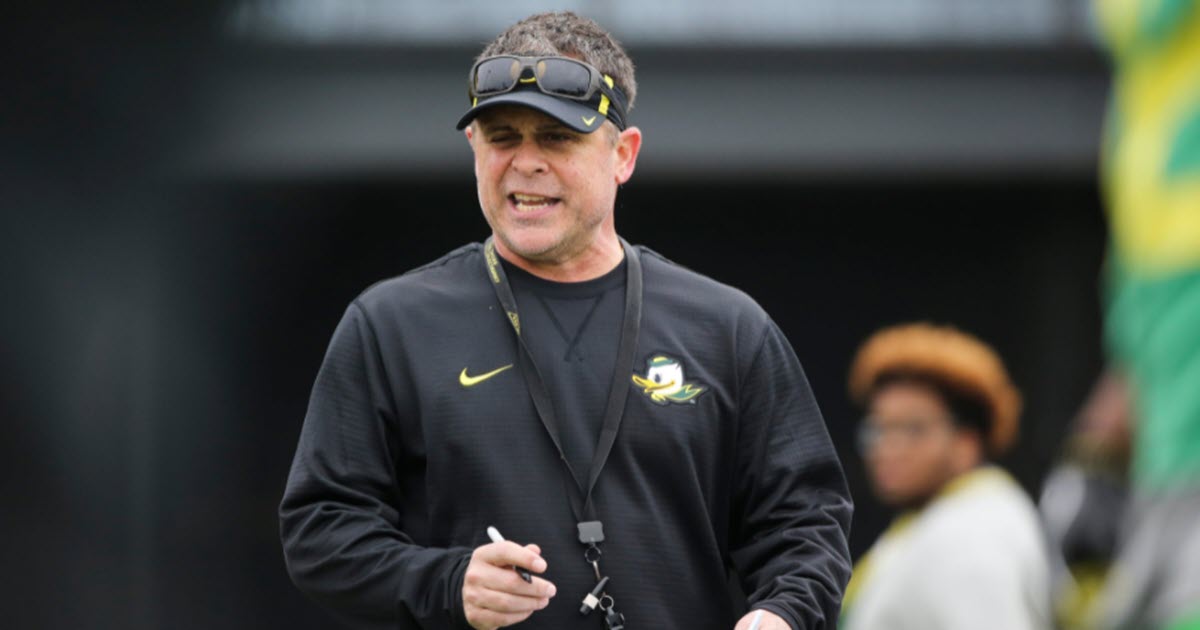 The first coach on the list is an in-house candidate, and it is Coach Jim Mastro. Promoting Coach Mastro would be one good way of continuing with the style of offense installed by Coach Moorhead. Sure you could try to entice one of his pupils, such as Coach Joe Brady of the Carolina Panthers or Coach Josh Gattis of the Michigan Wolverines, but they seem to already be in comfortable positions.

Not only has Coach Mastro been an exceptional recruiter for the Ducks, but he has also called plays on two separate occasions. Most recently, he called the plays in a 24-31 loss to the Stanford Cardinal this season, in which Coach Moorhead had a same-day emergency. While a loss because of poor execution on the day, the play-calling itself was solid. Before that, in 2019 he stepped in for Coach Marcus Arroyo in a 77-6 win over the Nevada Wolf Pack. 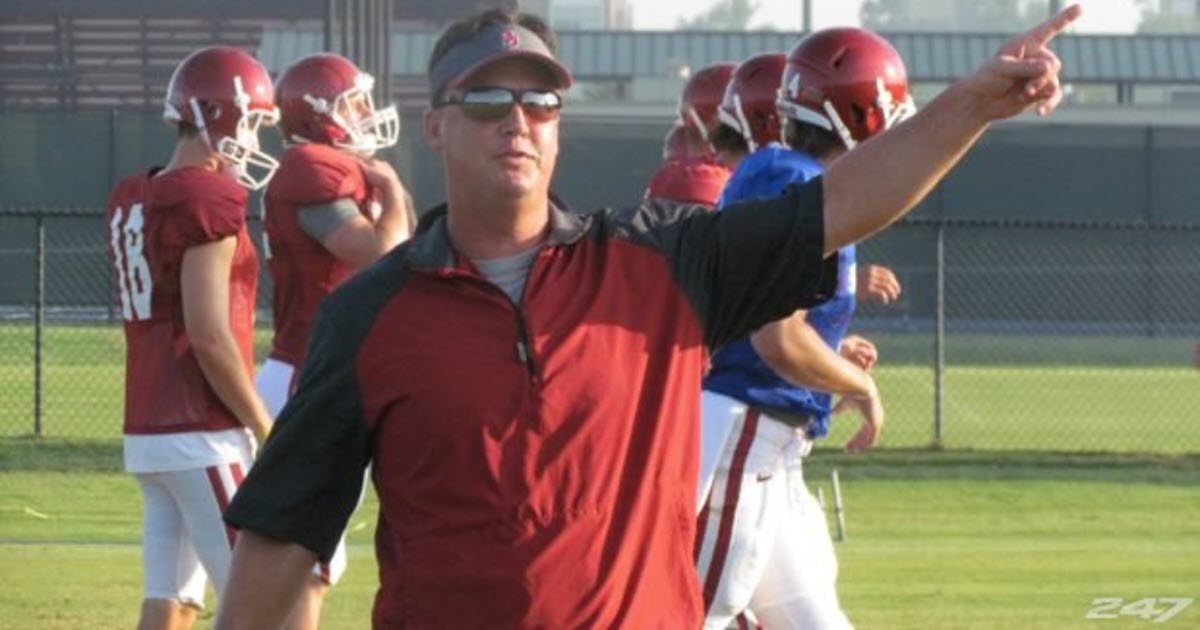 Coach Cale Gundy is currently the co-offensive coordinator for the Oklahoma Sooners. Though he does not call the plays, as that has been the duty of new USC Trojans HC Lincoln Riley, he has been very hands on with the game planning for the Sooners. It also doesn’t hurt to coach under one of the nation’s best play-callers in Coach Riley.

There is also the obvious advantage that this would give the Ducks while preparing for the USC Trojans in the future. Not only does this give you the ability to add many of the different aspects of the Riley offense, it also helps you prepare for it defensively. Though the lack of play-calling may seem troublesome to some, we may actually get to see Coach Gundy’s play-calling on display in the Sooners’ bowl game. 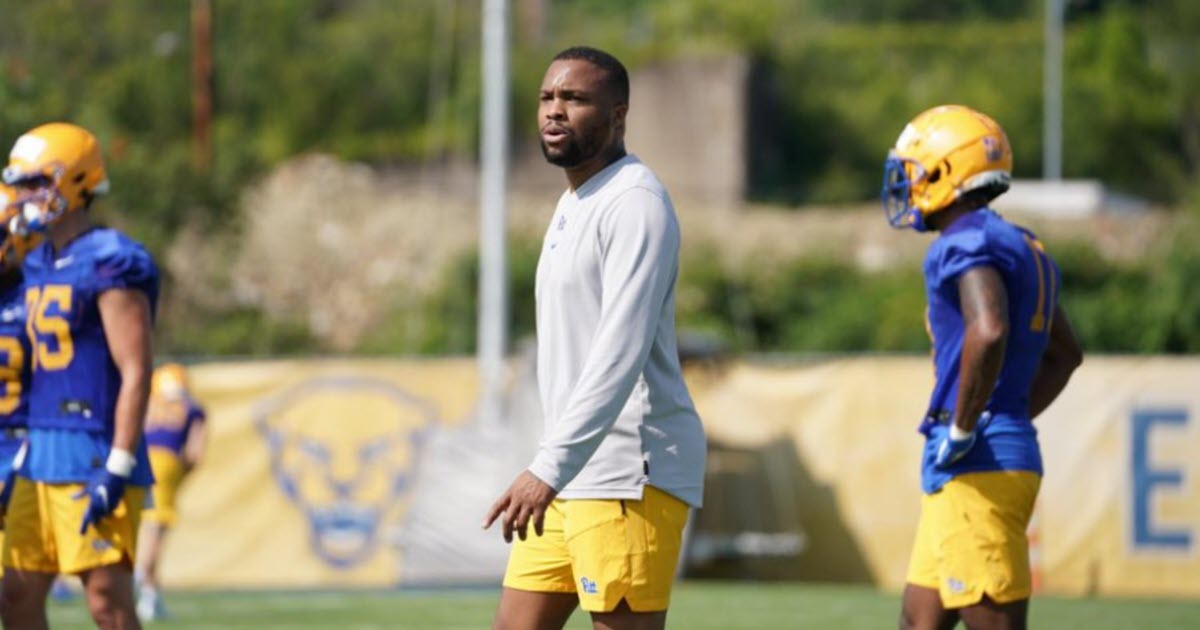 Coach Brennan Marion is currently the wide receivers coach for the Pittsburgh Panthers, but has been the offensive coordinator for both the Howard Bison and the William & Mary Tribe. Coach Marion is well known within the coaching community for his Go-Go Offense that he developed while with the Bison. In fact, his acute ability to design an offense is what landed him an interview with Coach Cristobal shortly before Coach Moorhead was hired as offensive coordinator.

The heavy interest shown in Coach Marion had led a few of us here at FishDuck to believe that the Ducks may add some concepts of the Go-Go to Coach Moorhead’s offense. That never ended up materializing, but could it happen now with the originator of the offense?
——————————————————————————————–
The Our Beloved Ducks Forum is the most extraordinary Oregon message board, a GREEN REFUGE! Come get the links to Oregon Sports articles, the press releases from the Oregon Athletic Department and the news from your fellow Duck fans. It is the only safe place on the web for Duck Discussion, such as today’s article, so join us over there!
——————————————————————————————–

Coach Willy Korn is the current quarterbacks coach and co-offensive coordinator for the Coastal Carolina Chanticleers. He is also the play caller for the nation’s sixth ranked offense. The Chanticleers offense has taken the college football world by storm, and pieces of it have even shown up in the Pac-12. Coach Chip Kelly and the UCLA Bruins actually installed parts of the scheme during last years shortened season.

The offense that Coach Korn currently calls at Coastal is a lot more in the classic triple option scheme than Oregon, but I suspect that he could come up with a way to combine it with what the Ducks do currently and come up with something pretty devastating for opposing defenses. Coach Jeff Lebby is the offensive coordinator for the Ole Miss Rebels, who are ranked as the fifth best offense in the nation at 506.7 yards per game. They also do that in the SEC West, which is considered by many to be the toughest division in all of college football. Coach Lebby runs a unique offense that some have labelled the Veer n’ Shoot. This is the same offense that the Baylor Bears were steamrolling opponents with just a few years ago.

On top of that, the Rebels offense has some pro-style influences courtesy of Coach Lane Kiffin. The combination of the two offenses have created something special, and that could something to strike fear in the rest of the North Division. This one seems to be a little bit of a long shot, but Coach Greg Roman is the current offensive coordinator of the Baltimore Ravens. Coach Roman coaches one of the more unique offenses in the NFL. It combines a lot of the pro-style elements that he used under Coach Jim Harbaugh at Stanford with an option run game and a heavy dose of RPOs. In fact, his Ravens offense is very similar to what Coach Harbaugh and Coach Gattis are doing at Michigan. If he were to come to Oregon, combining his offense with what Coach Moorhead has already built would give the Ducks something almost identical to the Wolverines.

Of course, it may be tough to get him to come back to college from the NFL, but it’s not something that hasn’t been done before. Coach Dan Mullen was most recently the head coach for the Florida Gators. I saved this one for last, as I assume Coach Mullen will be the top name for most Ducks fans. Though his time as the Gators head man didn’t work out, his last two offenses were in the top 12 in the nation. Earlier in his career he also helped Coach Urban Meyer secure two national titles with the Gators. His offense while with the Mississippi State Bulldogs, where he coached NFL quarterback Dak Prescott, earned him the HC opportunity with Florida.

I think Coach Mullen’s name recognition would bring a lot to recruiting for Oregon, and he definitely has the ability to coordinate a very strong offense.

Do I hope that Coach Moorhead is staying? Of course, I do. But, if he were to take the Akron job, I would be very happy for him. This is something that’s just part of the territory of being a good team with a good staff. If you look at Coach Nick Saban’s 2015 staff, five of those assistants are head coaches at power 5 programs. It means we’re doing things well, and that’s a good thing. But again, I’d rather this list not matter at all.