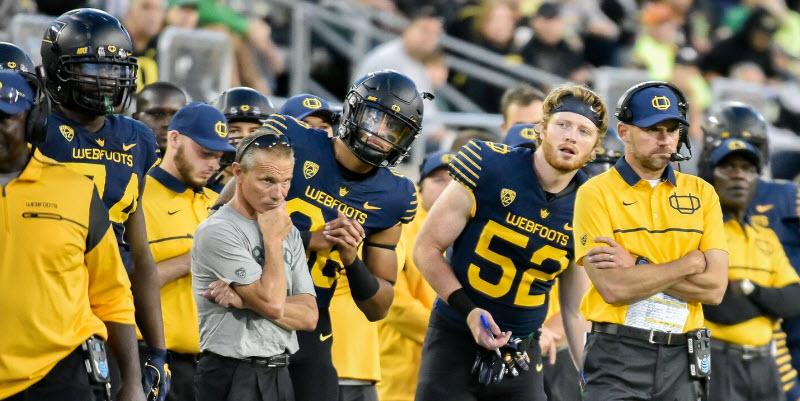 This was a very difficult article to write, as it runs contrary to my core beliefs about the Mark Helfrich/Oregon coaching situation. But like learning football and sharing it with you over the years, as I come into other opinions that make sense to me, I feel compelled to share them. We don’t know the truth, the inner happenings in the Hatfield-Dowling Complex, but we can begin to piece together items from various sources that make logical sense. Charles Fischer

I called a new coaching consultant who is retiring from coaching as an assistant at a very successful high school program and from his profession outside of coaching. I wanted to learn more about linebacker techniques and what Oregon was or was not implementing correctly. What I got was information that, frankly, stunned me.

While we talked about football, we also mixed in discussions of his business consulting background to give us a better picture of what a winning culture and what strong leadership is all about. For ethical reasons, I will withhold his name, and no, it is not anyone I’ve interviewed before, nor is it anyone who has been on the FishDuck.com staff prior to this football season. Charles: Isn’t the linebacker shoulder technique for taking on a block the same in the 3-4 defense as it is in the 4-3 defense the Ducks are currently running?

Coach: Broad generalizations scare me when applied to specific football situations because coaches work out their own exceptions to those generalizations as part of their overall defensive scheme. That said, the majority of the time that is true and you demonstrated this concept in your linebacker leverage analysis last week.

“I don’t understand why I see things done differently by the Ducks — especially since I teach sophomores in high school these same techniques, and the linebackers recruited to the Ducks had to have known these techniques in order to excel and get recruited.”

Charles: My concern is that if Oregon decides to clean house on defense, it will extend to the head coach, as well. Mark Helfrich was offensive coordinator and then the Ducks HC over the last six years, and thus the incredible institutional knowledge of the Oregon offense resides within him.

We can’t lose that, as it is the identity of Oregon Football. Bring in a new head coach, and the offense could be in the dumpster next year as the defense currently is! Could it work with Helfrich being retained by the new head coach as offensive coordinator?

Coach: As you know, Oregon opens up the football staff certain times of the year for high school coaches to come ask questions and talk football with the Oregon football staff. It was during one of these open periods that I was part of a group that came to the football offices to learn how to improve our own operations. During that time I was able to personally meet and talk to Coach Mark Helfrich. My friend … I know how you feel.

I have a background as a business consultant for companies right up through Fortune 500-sized, and dealt with a number of business leaders. After spending some time with coach Helfrich (and this was within 18 months of his becoming head coach), I recall wondering, “is this man too nice a guy to lead Oregon as head coach?” I was pondering whether he could retain the winning tradition that had been built at Oregon.

While my son and grandsons could certainly play for the accomplished and deeply principled coach Helfrich in a heartbeat, I fear a significant change in the culture of Oregon football since coach Kelly left. I don’t think a significant number of Kelly’s players would be smiling as they left the field after a 49-point walloping.

If a new HC is sought (and we don’t know all from our perspective), it should be to retain a culture of ownership and pride in football outcomes not demonstrated by all team members after the loss to Washington. To accomplish that culture change, the standard-bearer of the old culture cannot be present in my view.

Charles: Readers, I was blown away by this answer, as it was a gut-punch to me. I have personally loved and learned so much about football by studying what Mark Helfrich has brought to the football world. Chip Kelly’s NFL offense is stagnating (there are many articles out there about that), while Helfrich has continued to innovate the Oregon offense.

I am still undecided about the best course for Oregon football going forward.

“We can not acquire a sustained competitive advantage in recruiting without a competitive vision. And that’s the boss’s first leadership responsibility, as all else supports it and is secondary.  Therefore, there must not be a reminder to the players and more importantly, to the recruits, and the prospects, of the immediate painful past.”

Disclaimer: Readers: Every writer on FishDuck.com is allowed to express his or her opinion in their articles. However, articles do not represent the views of the other writers, editors, coaching consultants, management, or the principals of FishDuck.com.  — Charles Fischer