2016 is in the books. Should the rebuild begin under Mark Helfrich or somebody new?

I would like nothing more than to wake up today and get a blaring headline that Rob Mullens has pulled the trigger and followed the University of Texas to become one of two formerly elite programs ready to rebuild. In theory, Oregon had the purse power to go toe-to-toe with the Longhorns and get the best money can buy. But Texas had one thing Oregon apparently didn’t: enough of its current head coach. 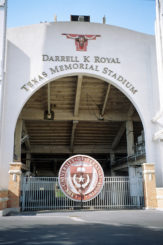 That, folks, is how its done. The same day they fire Charlie Strong, they hire Tom Herman who, in case you missed it, is the hottest item on the coaching market. Oregon has had weeks to make its move, but was waiting for a little bit of improvement out of Helfrich.

What next? There are other candidates, but none of them seem or feel real. I’d love the program to start fresh, find a defensive minded coach who can focus on rebuilding both sides of the line. An institutional focus on the line has been missing despite Oregon’s recent success. Kudos to Ruskin Fiegenbaum for putting that metric front and center. Control the Pitt. Win the Day.

Despite his best efforts, Chip Kelly can’t convince people he’s not on the market. Art Briles remains embroiled in a lawsuit in Waco. By my own standard, he’s off the table until Judge Pitman does the expected and dismisses the claims against him once and for all. But federal judges don’t work on the NCAA recruiting schedule. Even by my eager standard, Briles won’t be clear until February, 2017.

The questions, the hand wringing, the debating, it’s all about recruiting. The 15-17 year-old recruits being harvested by the top schools do not remember bad Oregon football. This year is an anomaly. The fans may remember and shrug. But to the next generation of NCAA standouts, bad Oregon football is about as shocking as good Raider football: it hasn’t happened for as long as they can remember. High school seniors this year were in kindergarten the last time Oregon had a losing record. If the bad years add up, the harvest won’t remember the good.

Which is why Mullens needs to act now. It’s a tough position to be in and one that I doubt Mullens expected. Oregon football has been an elite epicenter since 2010. If there was an iota of doubt about Helfrich in Mullens’ mind, it likely disappeared by the time he offered a red-carpet $17.5 million, 5-year extension for 2015.

FishDuck is right that there can be little question on whether Helfrich is a brilliant football mind who can run circles on one leg around us amateurs in the blogosphere. I’m a lawyer, not a coach. But Mullens is an accountant by training and administrator by trade. He’s no coach, either.

For two consecutive years, Helfrich’s team has broken the record for points given up at Autzen. This year, despite the talent, his offense has fallen out of the top 20 in points per game for the first time since the eve of the Kelly era – when the current recruits were in kindergarten, nursery school and diapers. 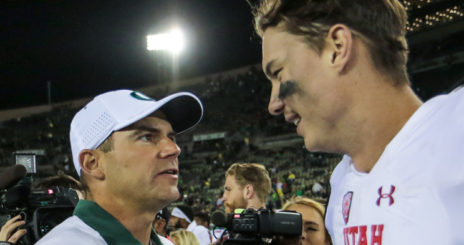 For two years running, Helfrichs Ducks have given up record points at home.

His defense is 126th in points and yards per game. His first choice for DC lasted only 2 seasons; a mark most don’t expect the incumbent to repeat. That’d mean Helfrich gets his 3rd DC in as many years. I question strongly whether Helfrich is the right man to make his third selection for the post.

Oregon needs leadership, not just smarts. I question Heflrich’s leadership alone: not his skill or talent as a football mind, but his ability to lead and persuade 18-22 year-olds.

The best argument for keeping Helfrich is tradition. Oregon simply doesn’t fire coaches. Mullens undoubtedly, like the rest of us, has been reminded that an Oregon post comes with loyalty and longevity. The best arguments to stick with Helfrich sound in equity: a reaction to an unexpectedly bad situation. Even “know nothings” like myself have espoused this refrain: everyone is entitled to a second chance, but not a third.

The difference is that, in my book, the 2016 season was Helfrich’s second chance. Maybe this is too harsh for some. Maybe I’ve been acclimatized to the East Coast pace. Maybe I alone am the one still clamoring for Helfrich’s head after his surprise win against Utah. But after the first loss to Oregon State in 8 years for a 4-8 season, I hope not. 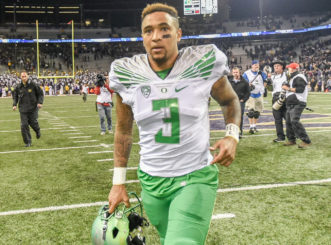 The 2015 Streak started with Adams’ return at UW and ended after 1/2 of the Alamo.

Few consider 2016 to be Helfrich’s second chance because of Vernon Adams. I have repeated this often but not enough: Adams was a magician. When he was on the field, Oregon was a playoff contender. When he was not, there was no ’Next Man Up.’

Every time Adams scrambled and extended a play – which often was multiple times per drive – he demonstrated the play the coaches called had failed. Adams carried the 2015 Ducks more than any one individual, coach or athlete, in a manner that is unrecognizable to the Oregon Way. If Adams had suffered a season-ending injury instead of a broken finger in the season opener, there would have been no salvaging the 2015 Ducks either.

The Adams streak ended promptly when he left the field at the half in the Alamo Bowl. This is when Oregon arguably got its first honest look at Helfrich’s program without a Heisman or wizard upon whom to lean. It was ugly. All around. Both sides of the ball. It fell apart.

A second chance but not a third.

So to me, it’s no surprise that 2016 was ugly. All around. For many, that view is too aggressive. 2015? Injuries happen. You can’t blame the coach, they say. The starting QB and center out in the same game? Fluke?

I say, Next Man Up. Jeff Lockie had no problem closing for Marcus Mariota or taking snaps from Hamani Stevens when Hroniss Grasu was injured. The very next year without Hegarty-Adams, there was no Next Man Up to take a snap from the 4-star recruit sophomore subbing at center. That’s not a skill problem.

And infamy encroached upon the Oregon Way.

It has taken hold this year. The sole unexpected win against Utah shouldn’t be near enough of that “little bit of improvement” to salvage Helfirch’s command. That’s on Mullens.

What will be the Oregon Way in 2017? I suspect Helfrich will get a third chance. To be fair, Helfrich is not the first coach to take a step back. Helfrich himself outcoached Mack Brown during his Texas swan song in 2013. The year after Brown lost the Natiional Champioship Game to Alabama in 2009, his shot to take a second championship back to Austin, his Longhorns suffered their first (and only) losing season during his tenure. He never recovered fully but he got three more chances, each a winning season, before the end. His replacement got three shots at Texas based on no more than two good seasons at Louisville. Many good coaches need a Mulligan. In 2013 Gary Patterson went 4-8 but now expects a statute in his honor at TCU.

Gary Patterson’s TCU Horned Frogs may have embarrassed Helfrich’s Adam-less Ducks, but it wasn’t that long ago when he needed a mulligan too. In 2013 he took his Horned Frogs to his first and only overall losing season at 4-8, but bounced back the very next year to 12-1.

It’s not just Oregon that’s shy to pull the trigger. We all hope the incumbent can turn it around. There are many good reasons to fire Helfrich, but when the decision is in your hands it has a different feel. I don’t know Mullens. Maybe he is a revolutionary, but I think we would have caught a glimpse by now.

If Helfirch gets his third DC, he may find himself in a bowl game in 2017. Not the playoff but a second- or third-tier bowl. Oregon could even break into the top 25 rankings by the end of the seasons with a 9-4 or 8-5 record. That measure of performance would ensure he completes his 5-year contract at Oregon.

And that’s one of the best reasons to end it now. Helfrich may be back, but it doesn’t look like his Ducks will be competing at an elite level. Oregon must move on from the Helfrich era to begin an elite second generation.

Texas made its move and it’s on Mullens now to do the same. We can’t hire Herman, but we can find and hire the best coach money can buy. I haven’t heard anyone argue Helfrich is that man – just that he deserves another shot.

The time is now for Oregon to tell the nation that the new Oregon Way is to compete for the best every year. It cannot include blow-outs at home or in a bowl game, losing seasons, being satisfied with a little bit of improvement or an unexpected win against a better team.

It is time for the Next Man Up to return to the top man. It’s time to make the ‘New Oregon Way’ known.

[Ed. Note: Nov. 27, 2016 USATODAY has unconfimed reports that Oregon has decided to move on from Helfrich with Western Michigan’s PJ Fleck and Boise State’s Bryan Harsin being named.]