The question will be on everyone’s minds soon enough. Will Pac-12 Player of the Year Dillon Brooks be back in 2017-18? Let’s take a deeper look at why – or why not – he might be back.

Joe Young earned the honor and wound up a second-round pick. Young left because he’d completed his eligibility. But make no mistake – if Brooks doesn’t think he’s going to be a first-round pick, he has a big decision to make. Because only first-round picks receive guaranteed contracts.

More than 80% of second-round picks never spend more than a month in the NBA. Because the first-round guys have guaranteed contracts, and given the focus on staying healthy and creating a long career, not more than 30-40 players retire or leave the league every year on average. So if you’re not a first-round pick, you’re probably not going to be Young or Draymond Green, you’re going to Europe or Asia to play professionally. Brooks may not want to do that right away and might want to wait for the softer draft of 2018. Dillon Brooks will use it as motivation.
Photo by Gary Breedlove

Go back to 2010 and only three are still on NBA rosters. None are starters. Unless you’re a first-round pick, there’s no guaranteed contract and teams aren’t going to wait for you to develop. Simple as that. You can be sure it’s a stat that Brooks, Chris Boucher, Jordan Bell and Tyler Dorsey will all have on their minds in May.

Brooks has elite level competitiveness, the ability to lift the game of his college teammates, ice in his veins when it comes to taking late game shots. He’s an elite scorer, a passer, rebounder, and defender … at the college level. Scouts see all of those things and love his all around game. Seeing how he fits into the NBA game is more difficult.

So, first the good news for Duck fans and the not-so-great news for Brooks’ NBA prospects. Brooks measures 6′ 6″ but that’s in shoes. And his wingspan is only 6′-4 ½. Players similar to him have 6′ 9″ wingspans. Why that matters in the NBA in a minute …

In the 2017 draft Brooks might be the best example of a tweener in the entire 2017 draft. One Dime Magazine writer described it perfectly by saying Brooks is ‘position-less’.

His height and weight mean he’ll have to play as a big NBA 2 guard or a small NBA small forward. (They measured him in his shoes at 6′ 6″ but he’s listed at 6′ 7″.) So by NBA standards he’s got some issues because of his height. His foot speed needs to be quicker if he’s going to play up on 2 guards or small forwards because they’ll go by him.

Ordinarily he could take a half step back to prevent that. Unfortunately, he doesn’t have the arm length to contest shots if he does that. Think about Nick Batum in that situation. He can play back a little and recover with just his reach when needed. His length actually covers for his lack of lateral quickness against guards. It’s one of the reasons Batum is such a good defender. NBA shooters get it off quick – it’s not the college game where you can recover with your feet and contest. Brooks’ perimeter skills are what will get him to and keep him in the NBA. He can finish on the break. He can do a ton of things, but he’ll have to guard and score against NBA 2’s and 3’s. 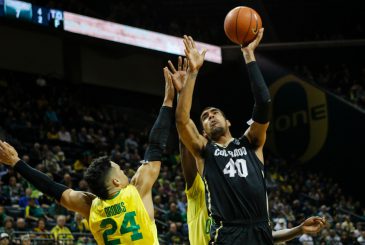 All of those things aside, maybe the biggest thing against Brooks or any of the Duck players is the depth of the 2017 draft.

Some have described it as the deepest draft since 1984. The year of Olojuwon, Jordan, Barkley, Stockton, etc. (It’s also a big reason Brooks and Dorsey considered leaving last year. They knew how deep the ’17 draft would be.)

This isn’t a knock on Brooks, it’s a testament to how deep this draft is. There are 18 players 6′ 9″ or above with the skill to play immediately at the 3-, 4- or 5-spot, all expected to go in the first round.

You can’t coach height. And a lot of those guys have the skill to play the 3 the way Brooks can. So, let’s put Brooks at the 19th pick and move him down based on others who have superstar written on them and whose games already fit the NBA.

Lonzo Ball, Markelle Fultz, Dennis Smith, Malik Monk, Luke Kennard, Frank Ntilikina, Donovan Mitchell and, yes, Alonzo Trier, who at 6′ 4″ is a prototypical 2 guard with his athleticism, length and ability to create his own shot. All are very likely to go in the first 25 picks.

So let’s assume Dillon Brooks’ NBA draft starts at the 27th spot. That’s four spots left in the first round, where a guaranteed contract awaits.

Competing against Josh Hart of Villanova, Terrance Ferguson, Cam Oliver (Nevada) and perhaps the draft’s most comparable player, Michigan State’s Miles Bridges who is also considered a classic ‘tweener’. But Bridges is younger so GM’s will likely see more upside growth potential in his game. This list also doesn’t factor in the Ducks’ Bell or Boucher, who have NBA athleticism and size to play the 4. Bell feels like Serge Ibaka in the making right now. With a proven short jumper, he’d be the 17th pick in the draft. Brooks continues to extend his shooting range and the consistency of his deep jumper.
Photo Credit: Gary Breedlove

Now here’s the bad news for Duck fans and the good news for Brooks’ chances. The upside could be immense and why he may just play a long time with success in the NBA. And why he might be gone this year if someone is smart enough to pick him with the 28th pick. (Hello Portland, hello San Antonio.)

Nobody competes harder or has improved his game more than Brooks in the past two years. He can pass, shoot, dribble and is big enough to set screens in the NBA. A smaller version of Green is a very good example of what his game could be. And the NBA has become more and more fluid of late in terms of who plays what position.

As a substitute he could play the 3 against some lineups and the 2 against bigger lineups that other teams throw out there. He wouldn’t be guarding CJ McCollum every night, he would be guarding Evan Turner. (A match-up that suddenly looks pretty good to an NBA GM) The range of things he can do could actually push him into the first round despite being a classic tweener physically.

The window for getting picked in the first round is small for Brooks. 4-5 spots at most. The worst thing he could do is declare and then get picked in the second round. Here’s hoping he gets great advice and he either winds up in San Antonio or back with the Ducks. And then he could possibly be picked in the late teens of the 2018 NBA Draft.