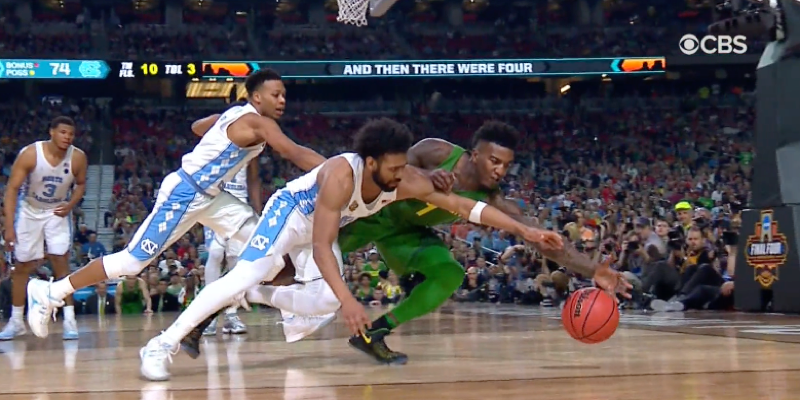 Crush our hopes with the injury to Chris Boucher, and then surprise us with an impressive win over one of college basketball’s blue-bloods in Kansas? So many of us truly did not know what to expect in this game, as there were so many areas that the Ducks needed to control to offset the big bodies the Tar Heels had in the low post.

So our beloved Ducks played tough defense that kept them in the game, but the three point shooting by Payton Pritchard and Dillon Brooks was a combined one for eight? I can hear Jayhawks fans howling in the dark …

“Why didn’t they shoot that way against us?” Because it was April’s Fool Day and the Basketball gods wanted to screw with Oregon fans.

Dillon Brooks was shooting NBA threes recently and Pritchard started this game with a quick five points and bunch of confidence for the precocious freshman, but the fouls put him on the bench to play only 23 minutes in this huge game?  When has that happened this season? How often has Brooks been this cold?

April Fool’s Day and the Basketball gods–I’m telling you!

I was impressed with how well our beloved Ducks played without Boucher, as his presence was most certainly missed against North Carolina–yet who would have predicted this team to have 16 turnovers? It seems for every good thing the Ducks did in this game–some countervailing force without precedent this season emerged for the plucky Ducks.

Tyler Dorsey was shooting so well that he acquired his own nickname … “Mr. March,” while the Basketball gods were hooting their heads off in the background.

“Let’s see–let’s make him shoot two-for-ten in the game until nearly the very end; then let him shoot a three that almost rescues Oregon and our torture gleefully being applied on Duck fans for April Fool’s Day is complete.”

Isn’t that how it felt as a devoted Oregon fan?

But the Basketball gods did not stop there–oh no, as the misery they created for those who wear green was not complete until they mesmerized the studio crew into making it a “North Carolina Telecast” throughout; playing their slow-motion highlights endlessly, and explaining why the Tar Heels were so much better–even when they were behind Oregon in the first half!

The slobbering by the sportscasters over Roy Williams and the vast superiority of North Carolina stood in stark contrast to reality of the thinnest of victories: one point. Heck … how many threes did Oregon have go in the cylinder and out? How many bunny shots were missed on tip-ins and lay-ups? We should have won by 12 on a normal day. Despite these frustrating contrasts–I was damn proud of these Ducks and I am sure Dick Harter was looking down from Basketball Heaven and was chuckling at how many times these fighting ducks in green were on the floor scrambling for possession, and getting the ball to their teammate.

So close, yet with so many shots missed … and I don’t want Jordan Bell to blame himself; if Pritchard or Brooks had hit just one more three? Oregon would not have fouled North Carolina at the end and that scenario does not even play out.

Despite the over-the-top praise lavished on the bluest of the blue bloods–the Tar Heels simply escaped. Our beloved Ducks played them tougher than they wished and needed a career game from Kennedy Meeks and a disastrous game from a few Ducks to make their win happen.

Amid the giggles of the Basketball gods on April Fools’ Day–the Tar Heels know it and so do we.