My friends, it is time to take heed of Coach John Edge from Kentucky who played against and knew Willie Taggart from his early days in coaching. We enjoyed his first article about Coach Taggart, and look forward to more insight into the formula that has rebuilt two teams in the recent past. Charles Fischer

Change has definitely come to Eugene.

Change is hard for a football program, but sometimes it’s for the better. After watching the spring football game, it’s clear that the Oregon Football culture is changing in exciting ways. The offense is taking a more run-first, downhill, physical approach, and the defense is really getting after the football.

Willie Taggart is bringing his own philosophy to the University of Oregon. That philosophy is contained in two simple ideas: have fun, and be competitive. 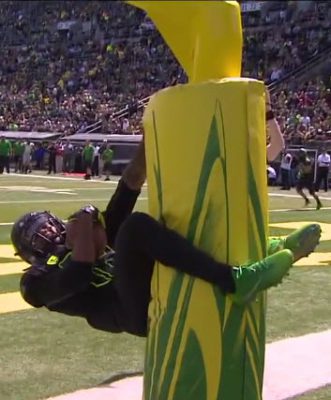 Now THAT is celebrating…

Let’s talk about having fun on the football field. [In this video of the spring game, (at 1:37:00), it’s clear to see that the players are having fun.] Taggart let The Free run up the score at the end, and they won the game by a significant margin. Players were sliding on the turf, creating their own celebration on their field.

I don’t think Coach Taggart would allow this in a big game such as Washington or Oregon State, but I’m sure he’ll find other ways to let the team have fun.

Now, you may be asking yourself, “That’s great, but how is it going to bring us wins?” Well, fun has to be part of the formula when you’re developing or rebuilding a program. When you’re having fun, when you enjoy what you’re doing, you give maximum effort every play. As a high school football coach, I see this quite a bit when we play against struggling programs. The players are not having fun! You see the quit and the lack of fight in them once you start winning by a significant margin. If kids are not having fun, they won’t give you their best.

“Competition breeds success.” While this is a bit of a cliché, it’s also very true. Creating a successful team is based on three things:

Simple rules are the foundation of the pyramid of success. At Owensboro Catholic, we have three of them:

You just can’t play a kid who won’t follow rules as simple as these.

Taggart has simple rules too, as he mentioned in his opening news conference:

Make no excuses. Blame no one. Do something.

The next part of the competition phase is the environment. Over the last three years at Oregon, we saw a close-knit group begin to break apart in ways that became destructive. Are the “me” attitudes leaving Eugene, or are they still there? After watching the spring game, I think that type of player is leaving. I saw players hustling and cheering other teammates on during the game. I got the feeling of a family atmosphere, even though players were still competing for jobs. 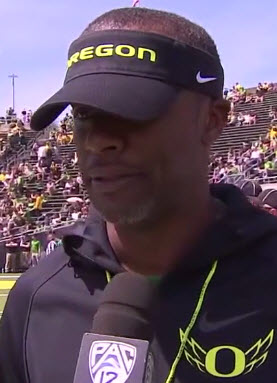 Taggart is a genius when it comes to this. One example is how he got away from the usual 1-offense vs. 2-defense, 1-defense vs. 2-offense in the spring ballgame. Instead of this, he went back to the “schoolyard” way of doing things. He created two teams: the “Free” and the “Brave.” He appointed a captain for each team, and then had them “draft” players, each captain picking a player alternately until the teams were formed.

I think it helps starters when they play with the 2’s and 3’s. And what a great way to create a competitive atmosphere!

Taggart will always create these three important qualities in his teams. But he will have to do it one step at a time. If a coach puts winning before taking the steps to build the program right, he will never win — winning is a by-product of building a successful program. You have to do little things right, or your foundation will fail.

Edge played college ball at Murray State University from 1995-1997 before transferring to Kentucky Wesleyan College in 1998-1999. While at Murray State, the Racers won two OVC titles and were the No. 1 defense in 1995. While at KWC, Edge moved to Linebacker. The Panthers had a 7-4 record.