Thank goodness Willie Taggart left. As soon as the rumors started to swirl that he might leave for Florida State, I started hoping he would leave. Taggart’s initial handling of the rumors indicated that he was going to leave Oregon at the first opportunity (even if that didn’t end up being FSU). That would mean instability year after year until he finally pulled the trigger on another opportunity. Once it became clear Taggart was already entertaining the idea of leaving, I wanted him gone. 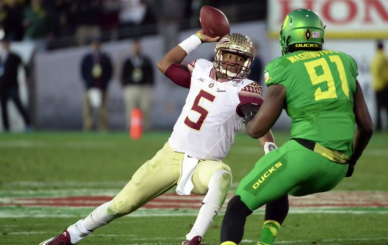 I don’t begrudge Taggart his dream job at FSU. It’s a great program, in his home state, near his family. It’s the perfect place for him. I’m genuinely happy that it’s worked out for him.

But I do think his handling of the transition was a disgrace. As other commentators said at the time, he should have been honest about the fact that he was considering a move for his dream job and family. Or he should have done what Scott Frost did: refuse to answer the question entirely (which is an answer in itself). Instead, Taggart said things like ”why wouldn’t I be [the Oregon coach next year],” “there’s no decision to be made” and the following tweet:

Looking forward to a great day tomorrow with our team. Practice, find out where & who we play in the bowl game, 2017 Team banquet and then back on the road recruiting. Go Ducks! #TheMovement18

If that wasn’t bad enough, Taggart lied to the players and recruits:

He lied straight to my dads face in my living room Thursday night. He didn’t keep his word to me Monday. Lost all my respect.

Taggart is a loss for Oregon, no doubt, but a few other things make me glad to see him go. I started worrying about Taggart when Charles posted the following article in February: “The ONE negative about Willie Taggart that we’ll Overlook.” It rang true for me that Taggart’s enthusiasm was not genuine. Moreover, while Taggart was an excellent recruiter and put together an outstanding staff, he was not a good play-caller, and his in-game adjustments were downright terrible.

When a coach leaves and the tears have dried, a team must swiftly turn to hiring the next coach (this is now even more true with the early signing period). Oregon’s athletic director, Rob Mullens, did just that and announced Mario Cristobal as the next head coach a mere three days after Taggart left for FSU. But throughout this time, I wished Oregon could simply return to a time before Mark Helfrich destroyed what had taken decades to build. 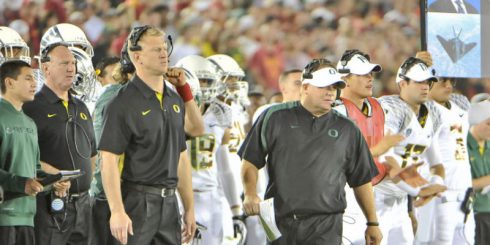 Of the coaches available this year, I would have preferred Scott Frost and Chip Kelly, in that order. But both of them are better suited to their respective landing spots. I dare say, even if the Oregon job had been available at the same time as the Nebraska and UCLA jobs, I would have chosen Nebraska for Frost and UCLA for Chip over Oregon.

Scott Frost was always meant to revive Nebraska football. It’s good for the Big Ten to have two healthy divisions. And it’s good for college football to have Nebraska back. I’m happy for Frost, and I hope it works out.

It’s weird to say it, but Oregon isn’t a good fit for Chip Kelly, if only because he hates recruiting. As is now clear, Oregon needs a coach dedicated to, and good at, recruiting. Further, Chip likes his privacy. And he’ll get it at UCLA. While playing against him will be tough, having him back is a boon for the Pac-12.

I’m warming to Mario Cristobal. It speaks volumes that the Oregon players petitioned for his candidacy. And I think Oregon may have found a hidden gem. While his head-coaching record leaves a lot to be desired (27-47), there were extenuating circumstances at Florida International University, and getting your “football Ph.D.” from Nick Saban is impressive. It remains to be seen what Cristobal is all about, but imagine if Cristobal can have Alabama-level sustained success at Oregon. I’ll take that.