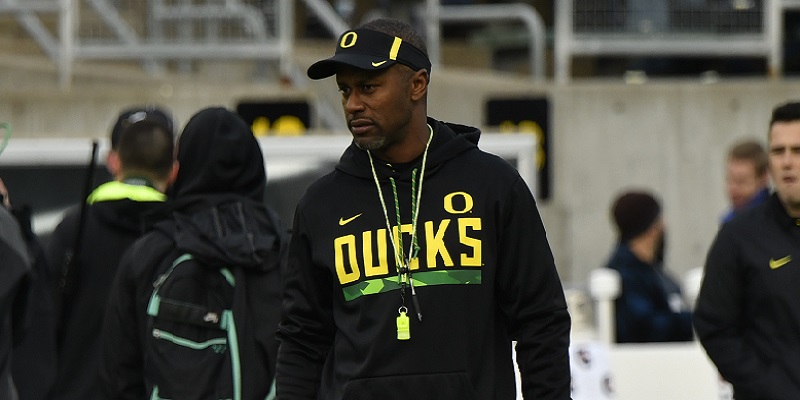 As I’m sitting here writing this, Willie Taggart is still the coach of the Oregon Ducks, but that could change at any minute. After just one successful, culture-altering season at one of the top programs in the country, Taggart is the top candidate for the blue-blood power Florida State. And it’s looking like he’s going to go.

Welcome to the world of big-time college football, where often times “loyalty” and “karma” —  whatever those things are — are placed on the back burner to make room for greed, ambition, and ego.

And you know who is very, very guilty of this? The University of Oregon.

Yes, our sweet little Oregon, for years the little train that could, finally got it’s first real modern day high in 1994. And like a first-time drug user quickly falling into addiction, we shortly there after let our sugar-daddy “druglord” (Phil Knight) keep us hooked and constantly wanting more.

MR. BROWNSTONE: We’ve all been dancing with him.

As Guns n’ Roses once sang in their legendary song “Mr. Brownstone”: “I used to do a little but a little wouldn’t do it, so the little got more and more, I just keep trying to get a little better, said a little better than before … ”

Used to be a seven win season was great, then eight, then nine, until suddenly anything less than 10 wins was considered a failure as we turned into blood-thirsty savages expecting heads to roll.

What happened to us?

We abruptly moved from the kiddie table to the big-boy table. And since then, we have indulged in every sinful big-boy luxury that has been afforded to us. On that fateful day in Dallas following the tragic 1995 Cotton Bowl, when Mike Bellotti asked Phil Knight for an indoor practice facility, the Oregon Ducks’ football innocence was forever lost.

Many will be upset if Taggart leaves because they say he owes the Ducks for giving him his first shot at a top-tier program, or that he’s lacking loyalty, or that he’s selfishly only looking out for number one. But weren’t the Ducks guilty of these same things when they pushed out long-time, loyal, successful, and well-liked coach Mike Bellotti in 2009?  In favor the latest and greatest thing known as Chip Kelly?

It’s a two way street people. Sure, there are some Duck fans out there who never bought into the over-indulgent spending and lavish Oregon-Football lifestyle and were happy as that little train that could. Good for you, your hands are clean. BELLOTTI: Was “promoted” out of his position as Oregon head coach.

But for the rest of us who desperately wanted the Ducks to become a football power, who wanted to shut-up the Huskies, and who wanted to enjoy the blue-blood lifestyle, well, we have a different color of blood on our hands.

Taggart bolting is part of this new life we have chosen. Don’t blame him. He’s just playing the game. Just as we do. He would be leaving the program better than when he got it. So, take the high road, wish him well, hold no grudges, move on, and hope the Ducks pick the right guy to take his place.

And if the Ducks don’t pick the right guy? At the drop of a guillotine’s blade, we’ll mercilessly tar and feather him in the press and social media and run him out of town.

That’s right, we’ll let our greed, ambition, and ego get the best of us …

A Few Names to Consider

Questions abound. A key component of who the Ducks might hire next should be if that coach can retain the current coaching staff. Especially the services of one Jim Leavitt.

Kevin Sumlin: The former Texas A&M coach is offensive minded, can recruit and sounds good if we can retain Leavitt and keep most of the current staff. Just slide him in there. Would he head out west? HARSIN: From foe to friend?

Jim Leavitt: Is retaining that the defensive genius that is Jim Leavitt worth promoting him to head coach? Or can he be retained as the DC under the next head coach?

Mario Cristobal: The current co-offensive coordinator would represent and smooth and fluid transition, with maybe the best shot at retaining many of the verbal recruits the Ducks have. Does he have what it takes to lead a top-tier program?

Bryan Harsin: Would Boise State’s current head man just be a poor man’s Chris Peterson? If so, would that be good enough?

Justin Wilcox: Why not pass along the “joy” of a one-and-done coach who heads back to his home state (and a division rival)?

Jim McElwain: Rumors have it he actually agreed to be the Ducks’ coach last year, then backed out. He’s available, but after being fired from Florida is he damaged goods?

(What are your thoughts? Let us know below)

Wouldn’t that be something if the Ducks hire Bryan Harsin away from Boise St. only to play the Broncos in the Las Vegas Bowl (December 16th).

I think I speak for all Duck fans when I say it would nice to pound the snot out of Boise State and exact revenge for our back to back losses in 2008 and 2009.