Lost in all the discussion about Oregon Head Football Coach Willie Taggart possibly leaving to coach at Florida State is whether or not he is even ready for the job leading the Seminole program. I don’t think he is, and this article serves as a statement of my reasons why. I invite your feedback–the best group of Oregon fans out there–to give me further items to ponder as this situation unfolds in real time.

I have no doubt about Taggart’s skills in the realm of recruiting, particularly in terms of getting others to share his vision. His recruiting ability is the best we have ever seen at Oregon, and I can only imagine what he would achieve once he made the College Football Playoff. This is his major selling point for Duck fans, but also for his suitors, namely FSU, who would seek to pry him from Eugene. Another component of recruiting and selling the vision is his ability to compile a first-rate coaching staff at Oregon. This is not just about hiring well; this is about motivating coaches to come long distances (in some cases) and uproot their families to join Willie’s team. There are many on this staff who are made up of the kind of quality fans like me dream of. A few of them had to prove themselves to me, but have done so in a very big way.

I recognize that perhaps only a dozen programs in the nation would be considered bigger, better jobs Oregon, and Florida State is one of those jobs due to a long winning tradition and access to fertile recruiting territory at its doorstep. Add to the equation that Willie would be returning to his home state makes it an easy assumption that he would grab this opportunity.

Now I will tell you why is not ready….

There is a big difference between a “system” and “calling plays.” Chip Kelly had a system that adjusted to what the defense was doing and attacked the weakest spot with the highest probability of success. Mark Helfrich continued this, as the Duck offense during his tenure was not his downfall; both coaches implemented a method of rotating plays from the playbook that made the same attacks, but in different ways. The new play or new look would confuse an opponent at key moments and keep drives alive, which in turn changed games.

You did not see this from Taggart until he had to do so in the midst of a losing streak.

Now, “just calling plays” works too, as Mike Bellotti had quite a playbook with sophisticated passing attacks and a variety of plays that kept opponents off-balance. It was surprising to see the contrast from Bellotti to Chip once the latter began to run the same plays over-and-over with repeat success. Different philosophies, and they both worked, yet I see Willie’s current offense as a compromise from what he really wants to do. 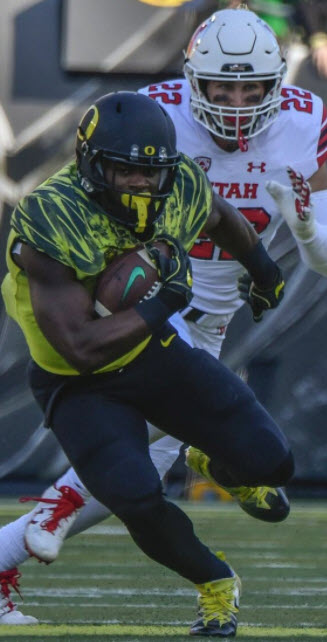 Royce Freeman had fun running outside against the Utes.

Then he stunned us with the outside running attack against Utah. The old Outside Zone Reads and Sweep Reads were back and devastating the traditionally strong Ute defense. Remember, the current Duck offensive linemen were recruited to Oregon to execute such plays due to their elite mobility and speed. This caught Utah by surprise, and I could see the linemen loving it and knocking people in space and creating cutback lanes for the running backs. Those plays work.

Prior to the Utah the game? The only attack to the perimeter was the Jet Sweep, which teams learned to contain easily. Take a page from the old Kelly system and pull a bunch of linemen to the outside, and lanes open up that simply don’t exist within the Counter and Jet Sweep combo. Those are great plays as part of an overall offensive attack, but are not sufficient when solely relied upon, as Taggart was doing initially. The Ducks made very few adjustments at halftime in their earlier games, with the moniker “we simply need to execute better” becoming a common refrain. In short, Taggart made it easier for opposing defenses.

Then Justin Herbert comes back and a passing attack returns, but in a different manner than Taggart would prefer. We know that Willie would prefer to pass infrequently and off play-action from the threat of a successful running game. But Herbert is the prototype NFL pocket passer who can chew up secondaries with enough time, and I credit to Taggart for letting Justin do just that in the Arizona and Oregon State games.

I want to see balance in the offense, but will admit that Herbert’s talents could bring even more scoring with a tilt in favor of the passing game (the major issue holding that strategy back is a lack of talented and experienced receivers on the current roster). I love watching this new offense that neither Bellotti or Kelly ran; the conglomeration of the Kelly outside running attack complemented by Taggart’s inside running attack, balanced by Herbert hurling the ball downfield … damn–it was a joy to watch!

But this conglomerated offense is not what Taggart is about. 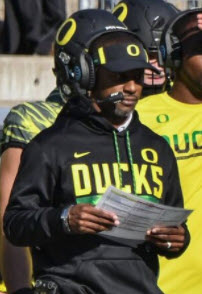 The Stanford approach will not win him a National Championship; the Cardinal simply do not score enough points. While some may point to Alabama as a counter to this point, the Tide had four first-round NFL draft picks off their defense in the last two years! That is incredible defensive talent that we simply will never see at Oregon. Further, that Crimson Tide defense was beaten by a balanced Clemson offense last year, led by a very talented, multi-dimensional quarterback. The Tigers also had talent on defense that Oregon hopes to aspire to, as that is what is needed in college football today to compete against wide-open offenses.

Assemble as good as defense as you can (give up 22 points per game or less–the Ducks can achieve this!) and create a high scoring offense averaging over 45 points a game, like Oregon had in 2014. But that is not Taggart’s game. He is doing what is necessary to win and I give him credit for being flexible and adjusting to the talent on hand.

Going to a traditional blue-blood program like Florida State, with the related sky-high expectations, requires an offensive system and identity you have confidence in, that is part of your DNA. Willie Taggart has yet to develop the offense he truly believes in. He needs at least another year to run this new hybrid offense, to develop an updated philosophy based on the smorgasbord of systems he is pulling from, and to truly believe in what he is doing as a playcaller.

He is not ready for Florida State.