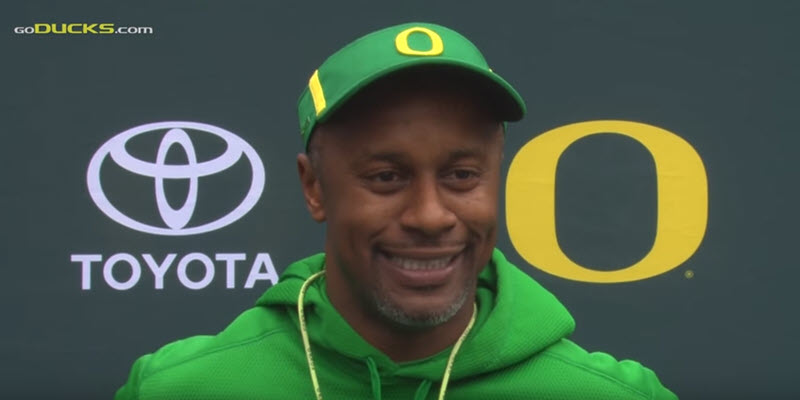 Admit it, you’ve been thinking about this too. You even know what I’m about to write, but like me, you have not wanted to address it because you are still annoyed at the despicable way he dumped the Ducks. But this is Lent, a Christian time of sacrifice; of cleansing and making amends. Before we put the Willie Taggart era completely in the rearview, shouldn’t we “fess-up,” so to speak, to three major positive changes he made in Eugene?

Recruiting Will NEVER be the Same

I admit that after a lifetime of watching the recruiting process intensely, I was sold on the concept of it being near impossible for Oregon to achieve top-five recruiting classes. What’s more, the Helfrich coaching staff was clearly convinced of the same. Whether you want to admit or not, the vast majority of you reading this felt the same way. Though many thought we could do better than the five 4 and 5-star players signed in the Mark Helfrich era, our collective expectations were not all that much higher. We have to move beyond this…

Taggart stunned us with what he accomplished on the recruiting front, as we were delighted, but a little in disbelief at all of the incredible players verbally committing to Oregon. Now, I admit there were a pair of factors in WT’s favor that cannot be duplicated: he was African-American and could relate culturally to many recruits in a way that white stiffs like myself simply cannot (it’s reality, people). However, he was also a world-class liar, truly skilled at deception. When this skill is combined with factor No. 1, it can apparently offset the barriers that keep prospects from traveling cross-country to quite a significant degree, as we observed.

I am not going to detail the lies, as we’ve all done that and lived it already. We know it will catch up to him eventually. Again, I am focusing on the positive accomplished by Coach Taggart while at Oregon. He destroyed the mental ceiling we all placed on recruiting. The expectations of ensuing coaches and of fans has forever been changed; Oregon can recruit well, and should recruit well.

Oregon’s Way was NOT the Best Way

We assumed the issues with Helfrich were leadership and poor hiring on defense, but Taggart showed us that Oregon was not only no longer cutting edge, but way behind the rest of the elite teams in how the program was organized and run day-to-day. Our recruiting could be more organized and updated to account for the social media age? Jimmy Radcliffe‘s strength and conditioning program was not the best? Oregon players were weak? My head was going to explode!

Admit it: we all went through the stages of shock, disbelief, and then with all the positive results coming from the changes, acceptance that the Bellotti/Kelly/Helfrich staff had become complacent and too set in their ways. Over time, and without anyone really noticing, the main asset of Oregon’s program (apart from maybe Nike), coaching continuity, became our weakness. This was hard and painful to eventually accept, as I am so grateful to all of those prior coaches.

Taggart created a ton of internal angst within us fans, and though we knew he was right after a while, it sure was a tough pill to swallow. I now understand the “cleaning house” methodology Taggart employed upon taking the job. Willie knew why Oregon had declined, and simply went to work changing it without pointing fingers or explaining. He helped save face for the prior coaches, and he made a fundamental shift in the operations and expectations within the football offices, which have now been altered forever.

The improvements by Taggart were enormous, but there was no bigger impact than the world-class, elite coaching staff he convinced to come to Eugene. Coach Mario Cristobal being pulled from the deep southeast would never have happened without the sales job done by Willie Taggart, and it must have been a doozie. In the end, the few coaches who followed WT to FSU have been replaced by even better coaches, as Mario can sell the vision of the “O” playing for the ‘Natty once again. The majority of the staff believed in Oregon more than Taggart at crunch time. No Cristobal without Taggart…

I am not going to detail all the great things we see emerging from the infancy of the ”Cristobal Era,” as we have other articles for that. But to have one of the top recruiting classes ever at Oregon, to retain and recruit elite coaches, and to massively change the recruiting and weight training programs to go even further than what Taggart accomplished? Whew! Coach Cristobal is a fireball and it really feels like he can lead us back to the promised land.

The Ducks would do well under Taggart, but football is more than recruiting. We will see upgrades in game planning, in-game adjustments, player development, and a multi-year recruiting strategy. This would not have happened unless WT brought in Coach Cristobal, convincing him forget Miami, the SEC, and the rest of the southeast region and come join our beloved Ducks.

Finally, there is the concept of karma, and how good things work out of seemingly stark adversity and despair. The feelings we had … that sick, awful, pit-in-the-stomach feeling when it was looking like Taggart would leave and finally did, and the emotions of being duped, dumped and abandoned were very real. We all felt them.

Yet now I am convinced that Oregon, not Florida State, got the better deal. In the big picture, this was the best thing that could have happened to the Ducks; we reaped the benefits of the three major changes  Taggart implemented, and then the program is passed to someone who is going to go even further with these changes! This is a “win-win” for all parties, as I am pumped about this coaching staff, and none of it would have happened without Willie Taggart.

Confession is good for the soul, and now this Duck fan can look back at Willie and truly say, “thanks,” and “I wish the best for you.” We are all in a better place now: Taggart, Oregon, and all of us loyal fans.