Last season, Oregon quarterback Justin Herbert drew substantial, early season Heisman buzz. Unfortunately, his play throughout the season didn’t earn him a ticket to New York. This season, however, will be different. According to this writer’s calculations, less hype plus a feel-good story equals bronze man giving stiff arm.

Heisman or no Heisman, Herbert needs to have his best season yet for the Ducks to live up to preseason expectations. Foregoing the chance to be a top-10 pick in the NFL Draft and the eight-figure contract that comes with it, Herbert chose to return to Oregon for his senior year. Because of him, and a boatload of returning starters, the Ducks have a real shot at making the College Football Playoff. Sure, they have to beat Auburn and win the Pac-12, neither an easy task, but the CFP is not an impossible goal.

For Herbert’s Heisman hopes, this bodes well. Historically, the star QB of a CFP team is a hot Heisman commodity. The preseason Heisman buzz around Herbert is more subdued this year, and I’m good with that, as the preseason favorite rarely wins the MVP award in any sport. The expectation is too high, and people like new things. If MVP awards were always given to the most deserving, Lebron James and Tom Brady would win every year. Ugh. Voter preference for rewarding the unexpected could explain why no player not named Archie Griffin has won the Heisman twice.

This season presents two heavy Heisman favorites, Tua Tagovailoa at +250 and Trevor Lawrence at +300. (All odds according to the Westgate Las Vegas SuperBook’s Opening odds.) Last season, Tagovailoa threw for 3966 yards, 43 touchdowns and 6 interceptions. Lawrence’s stats: 3280 yards, 30 touchdowns and 4 picks. While both may very well exceed those numbers this season, the best stats don’t always guarantee a win.

Last season’s winner Kyler Murray threw for 4361 yards, 42 touchdowns and 7 interceptions, while Dwayne Haskins, who threw for 4831 yards, 50 touchdowns and 8 picks, finished a distant third. Murray had better rushing numbers, but it was his dynamic highlight reel, compelling story and solid character — not his stats — that swung the vote. 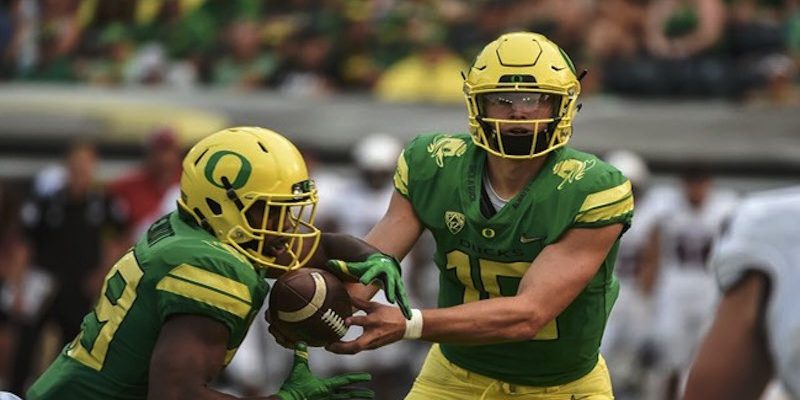 In 2016, Lamar Jackson won ahead of Deshaun Watson. Watson put up superior passing numbers, and although Jackson’s rushing numbers were better, No. 4 proved he was the best QB in college football by winning a national championship against the top-seeded Tide.

Third-place finisher Baker Mayfield took home the hardware the ensuing year over Bryce Love and Saquon Barkley, stat-sheet stuffers who put up historic numbers for their respective programs. Baker put up serious numbers as well, but his cause was aided by his backstory as an under-recruited player who rose from walk-on to senior standout to lead his team to the College Football Playoff.

The last wire-to-wire Heisman winner was the great Marcus Mariota. He really wasn’t a heavy favorite either, and there were many who thought we’d see the second-ever repeat winner in Jameis Winston.  But less-than-impressive stats down the stretch, an armful of stolen crab legs and an ill-advised cafeteria joke led to a sixth-place finish. The greatest night in Oregon football history, and probably Mariota’s too.

So how about a clean-cut Oregon native with impeccable character passing up the riches of a top-10 NFL draft selection to return for his senior year? A humble, down-to-earth guy who’s 6’6” with a rocket arm and pinpoint accuracy, Herbert sounds like the perfect candidate for plenty of publicity and fanfare in 2018.

The Following Is for Information Purposes Only

Herbert is a verifiable longshot at +3000 odds. Look, I’m not sure Herbert will win. With a list of Heisman hopefuls as long as Chris Jericho’s list of submission holds, I can’t even guarantee he’ll finish in the top three. But with another year in Marcus Arroyo’s offense, a legitimate receiving corps and a bruising offensive line, I’ll take those odds in a hot minute. I’ll take the potential for a big a payout. I’ll take the great story. And I’ll take a season of cheering Herbie all the way to the Big Apple.