We have heard a lot about Mario Cristobal’s attempt to turn Oregon into “Alabama West.” While this is certainly an appealing vision for Oregon fans, I want to propose a more realistic, equally effective model for success: the Clemson Tigers.

Quick background: In 2008, Dabo Swinney took over midway through the season as interim head coach after Tommy Bowden’s resignation. Prior to this appointment, Swinney had never been more than a wide receivers coach, but had a reputation as a phenomenal recruiter. He eventually earned the full-time role and began a slow, stop-start ascent to the top of the college football world.

Swinney was not a popular hire, with fans questioning his experience and the fact that he retained some of the staff that had failed under Bowden. Early on, the critics appeared correct: Swinney’s second season in charge finished 6-7, Clemson’s first losing season since 1998. It seemed the Tigers were headed back to the middle tier of the ACC, while up-and-coming Maryland would become the challenger to Florida State and Virginia Tech’s stranglehold on the division.

What’s that thing they say about hindsight? 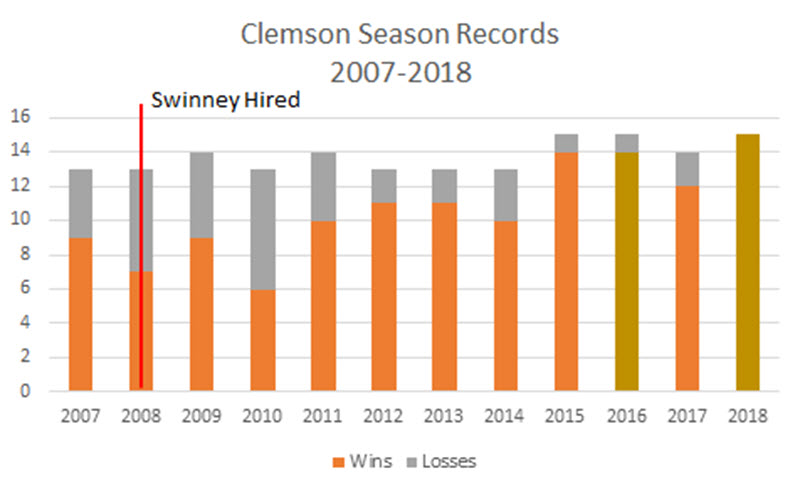 As shown above, Clemson bounced back the next year and won 10 or 11 games each of the following four seasons. People were paying attention, but Florida State was still the top dog and the only team playing “SEC-style football” outside of the conference. Clemson supposedly lacked the talent to compete on the biggest stage.

Throughout its ascent, Clemson recruited well, but nowhere near the Bama levels many consider the requirement for a national championship. Classes ranking between 10 and 20 were the norm. So how did the Tigers jump from good to excellent? My hypothesis: culture.

There is nothing groundbreaking about what the Tigers do on offense or defense. They certainly have great coordinators and position coaches, but there is nothing stylistically that differentiates Clemson from other top teams. As noted, Clemson has recruited well, but it has been more about what they have gotten out of those players that has allowed them to compete at the highest level. 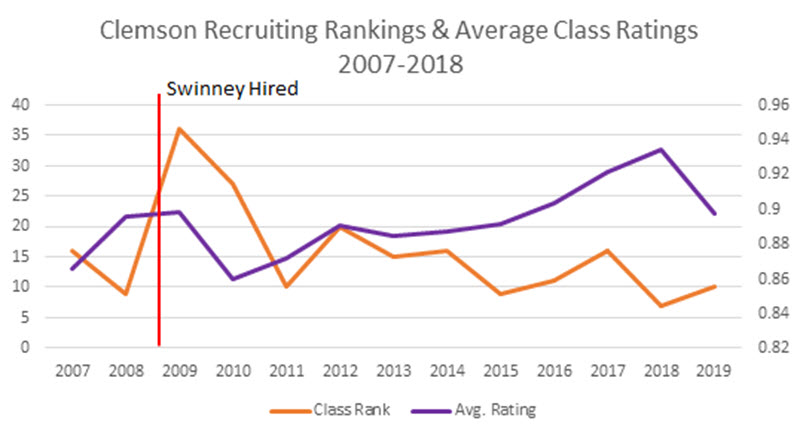 How does a team maximize talent? The Tigers’ patented #ALLIN philosophy, which Swinney described in 2014 as,“being committed to just doing the best you can with what you’ve got,” has pushed their coaches and players to outwork everyone around them, helping Clemson leapfrog Florida State and knock off Alabama to become the premier program in college football.

Can the Ducks Go All In?

How can the Ducks implement this, and what can we as fans learn? First, it seems that Cristobal and company recognize that they will need to recruit and work at the highest level to compete for championships. Additionally, based on interviews with the staff and reviews from recruits, building a high-energy, high-intensity and player-first culture has been underway since Cristobal was promoted to head coach.

As a fan, I see two primary takeaways. First, annual top-five recruiting is not a requirement to be a title-winning team. Second, be patient. Oregon likely won’t win any national championships in the next few years, but as long as the fans see consistent winning, high-level recruiting and the establishment of a culture that players buy in to, we can feel comfortable that we are on the path to the summit.

The son, nephew, and brother of UO grads, Ben has been an avid Duck fan as long as he can remember. His first Duck memories include seeing childhood hero Joey Harrington throw, run, and catch touchdowns in the 2000 Holiday Bowl win over Texas, and being reduced to tears when the Luke, Luke, and Freddie basketball team fell to Kansas in the Elite 8. After graduating from Colgate University in Upstate NY, Ben spent 4 years in Manhattan before moving to Chicago, where he works in data analytics and lives with his fiancee (and converted Duck) Samantha.