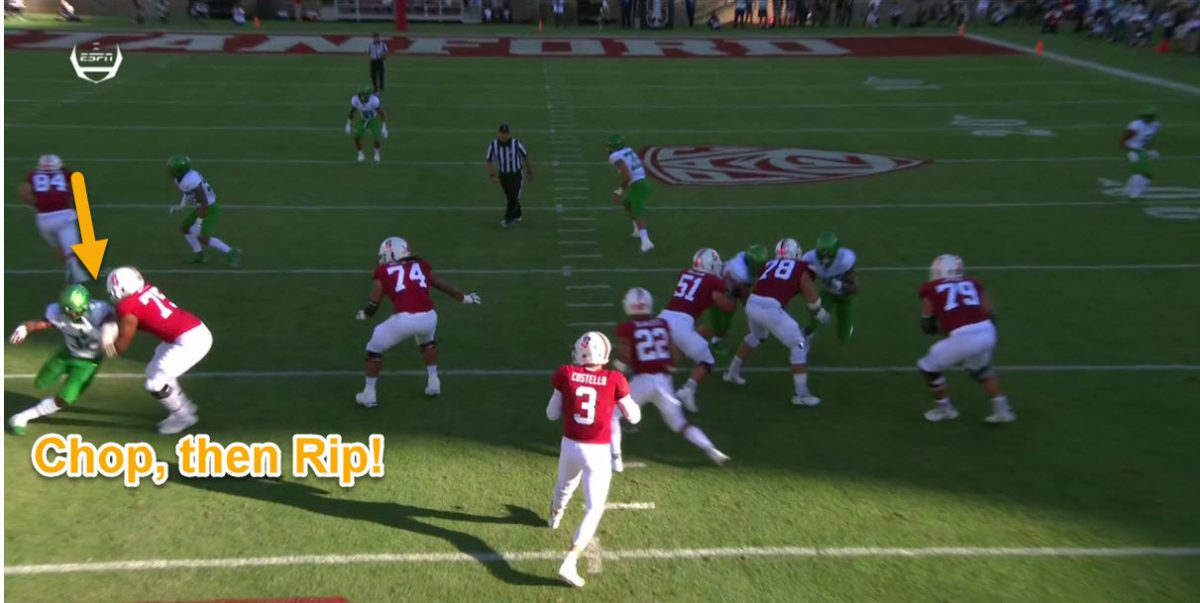 Funny how things reverse when you least expect it, isn’t it? It wasn’t that long ago the Oregon offense was scoring boatloads of points, and so many people would be screaming at the defensive coordinator for giving up so many points. Now we have the reverse, and while the offensive woes do frustrate us, we do need to enjoy this unique defense that is emerging and now leading the conference in sacks. (15 in only four games!)

I remember years ago being in the San Francisco airport and meeting assistant coach Joe Schaffeld who was in charge of the Duck defensive line. I had a blast talking with him and as an old offensive tackle — I shared my bias about the advantage that we have on the other side of the ball from him. (Remember, he was on the Rose Bowl team that played the top-ranked team, Ohio State, to within a field goal.)

This fellow was highly entertaining, and incredibly knowledgeable. I will never forget how he leaned into me, squinted his eyes and with a very serious expression growled …

I can defeat any blocking scheme you got!

I imagine that defensive coordinator Andy Avalos with his 3-3-5 defensive system, and Joe Salave’a with his defensive line techniques, feel the same way as that great Duck player and coach did. Let’s take a look at a couple of pass-rushing examples from the Stanford game and learn what to watch out for when we play Cal next week. (The remainder of this analysis will take four minutes or less for you is all) 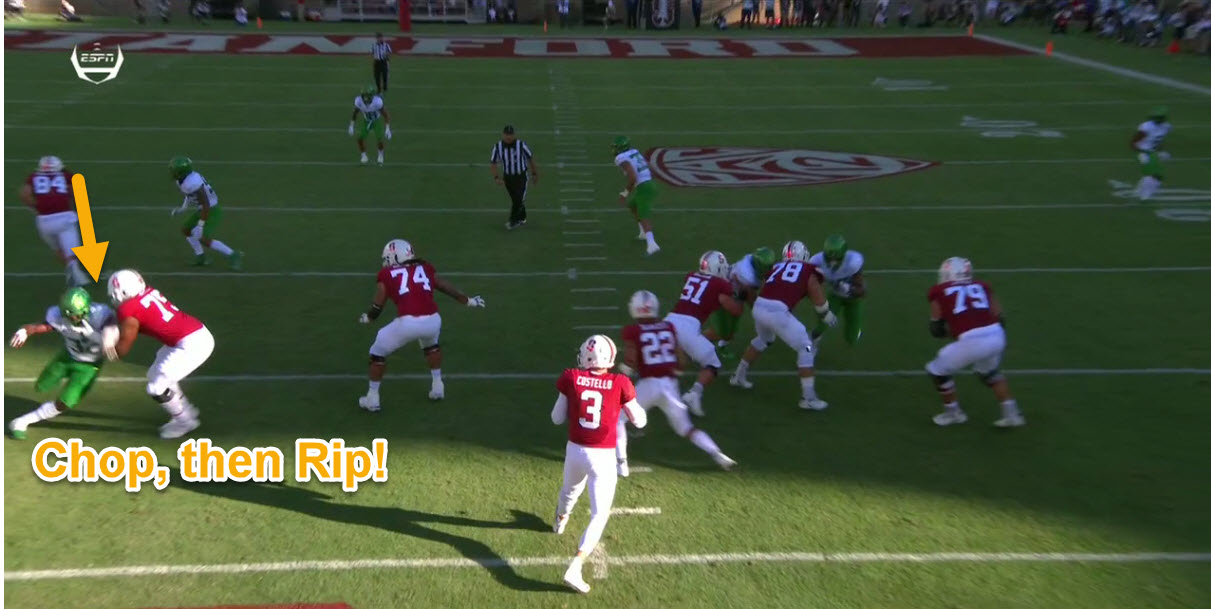 A big third-down stop was created with an only a three-man rush, but it was senior La’Mar Winston (above) who made it happen with a Chop, and then a Rip move on the Stanford offensive tackle. Winston drove the Cardinal quarterback out of the pocket, which led to him getting sacked by Gus Cumberlander.

When you watch the video below in slow motion, watch for how Winston does not chop from a high starting point, but from a natural motion as if he’s pumping his arms while he’s running. It is an effective way to get the offensive tackle’s hands off of him so La’Mar can get into the backfield. 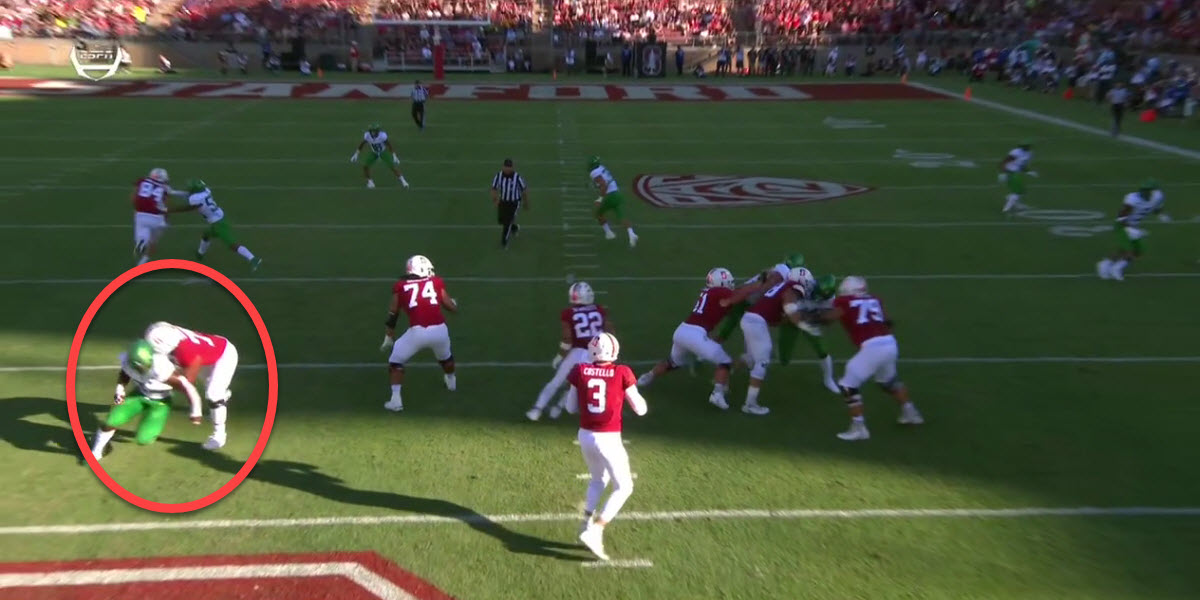 In the instant after the Chop, Winston (Red circle above) will dip his shoulder and Rip around the corner, as the Cardinal tackle has lost leverage and control of the Duck defender. At this point in the pass rush, Winston is now using his weight and speed in motion as a weapon …

Cumberlander got the sack, (above) but I’m sure in the team meeting room Winston got the glory as well because it doesn’t happen without him flushing the quarterback from the pocket so Gus could clean up and make a huge third down stop.

One NFL coach explained online recently how even though there are a multitude of successful pass rushing moves, the best one is still the Bull Rush. Above is a great example from Drayton Carlberg going against an experienced Cardinal guard. The key is to charge into the offensive lineman with a full extension of your arms and inside of the OL’s arms and on the chest. Whoever has inside control has the advantage, or as football coaches like Ken Woody will say, “The low man wins.” Note also the explosion of Carlberg’s hips (yellow arrow above) for power up and into the Cardinal …

It comes down to the hands…

Note how the Cardinal guard (yellow arrow above) has been knocked backwards from the powerful Bull Rush of Drayton. The next step is to discard the offensive lineman and get to the quarterback. The Ducks practice these hand moves nearly every day in practice, and as Drayton pushes off — it prevents the guard from stopping him while helping to project Carlberg into the quarterback.

Watching this never gets old, and it is thrilling for me to see so many red-shirt seniors like Drayton Carlberg, Gus Cumberlander, Gary Baker and Bryson Young — players who weren’t starters very often in the past — making an impact in this new defense.

I couldn’t help but wonder if the sacks in the game came easier for both La’Mar Winston and Drayton Carlberg since they go up against the Oregon left side offensive line in Shane Lemieux and Penei Sewell every day? Wouldn’t that make the Stanford competition seem easier by comparison?

I guess that is iron sharpening iron …

My friends, I have not done an analysis article like this in a very long time, as I am usually doing opinion articles. Something I have to master is brevity, as that is our new standard with analysis articles and I appreciate your patience. With the bye week, it was fun to dust off those old skills to study this Avalos defense that is bringing us so many thrills.