I started out the college football season last Thursday night watching the Chip Kelly-led Bruins embarrass themselves on national television. Watching the debacle unfold further cemented my opinion that Chip did not compensate for his weaknesses when he took the job. He didn’t hire a good defensive coordinator and he clearly didn’t hire a staff that likes to recruit, unlike himself (class ranked No. 42 in 2019, currently No. 60 for 2020).

I carried these thoughts as I watched the Ducks’ late-game disintegration occur on Saturday.

For the record, I agree and support everything that Mario Cristobal has done so far in putting together his football program at the University of Oregon. He’s hired a talented defensive coordinator, is great at recruiting, has instilled a physicality and a great culture, etc., etc … I agree in all aspects except for one.

Darrian Felix rumbles in for a touchdown.

Unlike his predecessor Willie Taggart, Cristobal’s background is as an offensive line coach. He has minimal experience as an offensive coordinator, and none as a play caller. Therefore, scheming and play calling are not his areas of expertise when compared to the top offensive minds in the game.

We now turn to current offensive coordinator Marcus Arroyo. When you look at Arroyo’s experience, it’s not very impressive. He’s got the resume of a guy who should probably still be learning his trade at a lower Division 1 school. Keep in mind, Taggart called the plays for Oregon’s offense in 2017 and brought in Arroyo and Cristobal as co-offensive coordinators. They were more or less glorified position coaches and consultants. Essentially extra sets of eyes who would not challenge Taggart’s rule of the offense and complimentary “expertise.”

The problem is that the term “co-offensive coordinator,” much like with “co-starting quarterback,” means that if you have two you don’t have “the one.” Simply put, Taggart brought in Arroyo to be a “yes-man,” not to be the guy to run an elite offense at a major college football program the way he brought in Jim Leavitt to run the defense.

Now we fast-forward a year to 2018. Taggart bolts and Cristobal becomes the head coach. Instead of combing the country for the best offensive mind that money could buy (again, like Taggart with Leavitt), Cristobal promotes Taggart’s “yes-man” to take over the reigns of the entire offense and play calling.

Does anybody see the red flag here?

My guess at what Cristobal was thinking when promoting Arroyo to offensive coordinator falls into one of two categories:

1. Cristobal kept Arroyo around to continue to be a “yes-man” as Mario continues to instill his will of power football. Or, more likely,

2. Cristobal made the mistake of thinking Arroyo had what it takes to be “the guy.” 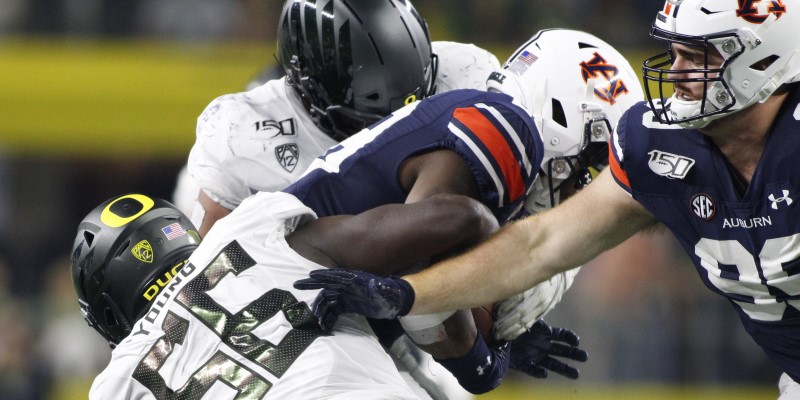 The Oregon defense played very well, but needed some help from the offense late in the game.

Cristobal did not hire from within when hiring a new DC this past offseason. He didn’t do the easy thing, which begs the question as to why he didn’t do the same thing with the OC position. Maybe there’s a loyalty and friendship there. Maybe there’s not wanting to expose Justin Herbert to yet another offensive coordinator. Maybe there’s something else at play.

Whatever it might be, Oregon football is now paying the price for Cristobal not properly addressing his team’s weakness. The 2018 Oregon offense was way too predictable, easy to defend, and basically didn’t show up in four games. It felt as if way too much on-the-job-training was going on offensively. That shouldn’t happen at a high-level program like Oregon.

A change needed to be made, and it didn’t happen.

The in-game mismanagement mistakes are something Cristobal must learn on his own. Unfortunately, he can’t hire somebody to do that for him (Hey Phil Knight, maybe an outside consultant on clock management?). But having a high-end offensive coordinator would certainly help guide him into making the right choices, or even putting the team in position of not having to make these tough in-game decisions in the first place.

I can hear some of you now crying, “but the receiver dropped that touchdown and Mario mismanaged the clock.” Yes, and yes. But believing that the wide receivers and Cristobal’s clock issues are the lone reasons that this offense isn’t clicking is like saying that there are no sharks underneath those large fins we see skimming the ocean waters.

There’s something larger going on here, and it starts at the top of the offensive food chain.

To the offensive coaching staff’s credit, they started out hot. It’s clear they did a nice job of breaking down Auburn tape and had a good scheme to take advantage of the Tigers early on. But as the game progressed, and Auburn made defensive adjustments, the Ducks did not counter with adjustments of their own.

The Auburn defense started out giving a large cushion to the Oregon receivers, to which the Ducks took advantage of with quick throws to the outside. But as the game wore on, Auburn took away that cushion, which should have opened the door for the Ducks to stretch the field. Jevon Holland was superior in his punt returns.

Of course, some will say that the Ducks don’t have the receivers (injuries) to do so. Nonsense. Why not try to stretch the field with Jaylon Redd, Josh Delgado or Johnny Johnson III? Did you see a young and inexperienced Spencer Webb make that touchdown catch? That’s a heavily recruited, talented player making a big play when given a chance. Let the boys play; that’s why you signed them.

It’s up to the coaches to find ways to counter the defense and put that talent in a position to succeed and allow Herbert to be great. If Arroyo isn’t making the call to do so, Cristobal needs to get in his ear. You have got to trust your players to make big plays as Herbert did on his TD pass to Webb. The coaches should have done the same.

I will flash a ray of sunshine on this piece by saying that I wholeheartedly believe that Cristobal is the long-term solution and will bring Oregon to new and sustained heights. But the current growing pains are doozies.

The Oregonian‘s John Canzano recently wrote an article discussing the books that Cristobal reads through his book club. His collection is littered with books on leadership, strategy and management. I can’t help but think that the one titled, “Leadership: Identifying and Addressing Weaknesses” hasn’t arrived yet.

Cristobal desperately needs to get his offense figured out sooner rather than later. Of course, I guess if it does happen later, he may well have the chance to say, “Hey Chip, sorry it didn’t go well in Tinseltown. Wanna’ come back to Eugene?”

Okay, okay … we’ll save that discussion for another day.