It took 243 days of preparation to score 21 points.

Twenty-one points would be unsatisfactory even if Oregon had had just one week to prepare for the Auburn Tigers. And Oregon had 34 weeks. Thirty-four weeks to leave last season’s abysmal offensive performances in the past.

CJ Verdell had a respectable 14 carries for 76 yards and a touchdown, good for a 5.4 yard average. Yet despite his decent outing against the vaunted Auburn front, Oregon could only manage a paltry 2.7 yards per carry overall. Much of that was due to Justin Herbert’s eight rushes for minus 16 yards, but the lack of faith in ball carriers not named Verdell or Travis Dye contributed as well. 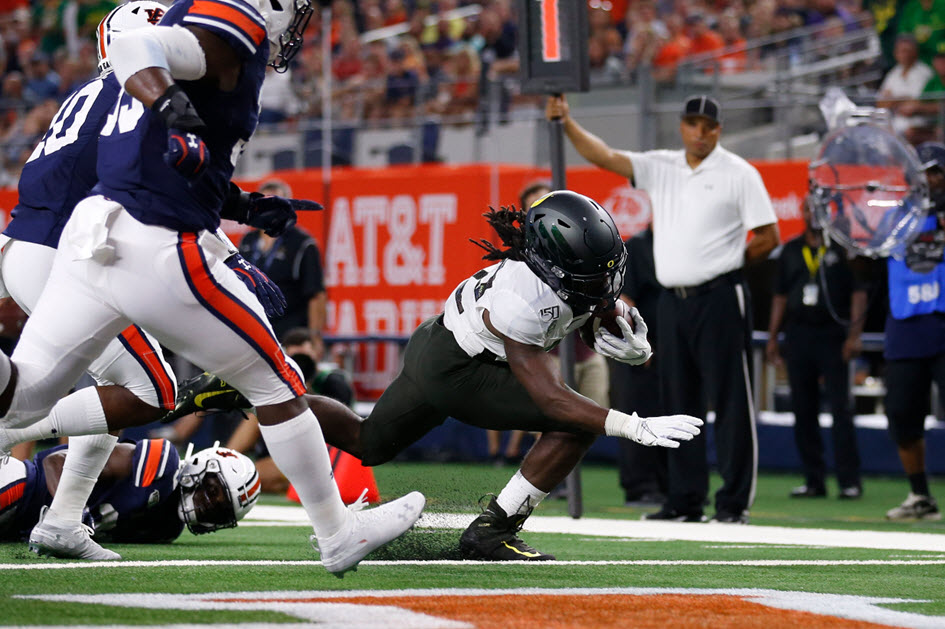 Cyrus Habibi-Likio had only two carries for five yards. This while coaches raved all offseason about his improvement and spoke constantly about expanding his role within the offense. Similarly, Darrian Felix scored Oregon’s only points of the second half, and yet only carried the ball twice for a total of seven yards.

Verdell and Dye combined for 99 yards on 20 carries, just short of 5.0 yards per carry. All of the other rushers combined lost a total of nine yards.

A veteran offensive line, two leading returning rushers, and 243 days should have been good for more than 90 yards on the ground.

Herbert is a likely top-ten pick in the upcoming NFL Draft, and could have been the number one overall pick in the 2018 draft.  And he looked pedestrian on Saturday. 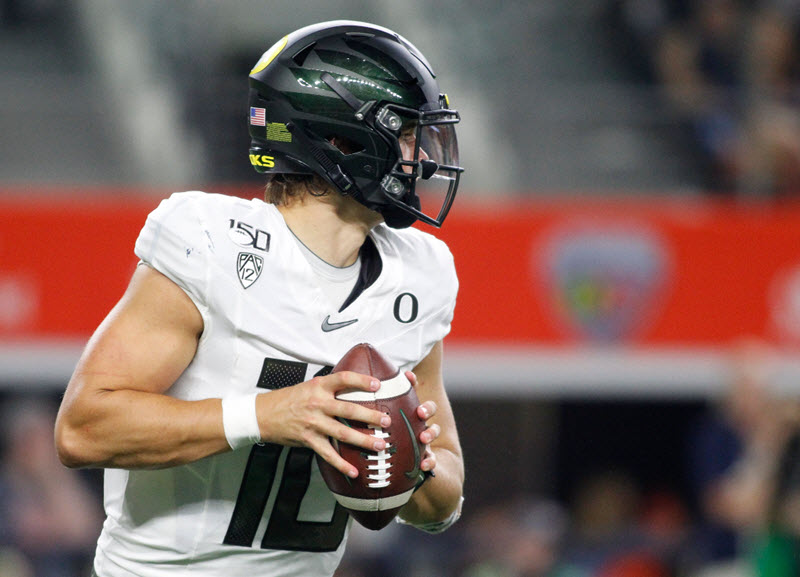 Much of Herbert’s hype is centered around his size, mobility in the pocket, arm strength and accuracy. These are all desirable traits in an NFL quarterback, but his lack of command over the offense after four years and some head-scratching decision-making will give NFL scouts pause. However great his arm is, Herbert’s insistence on making silly throws is a continuing concern.

While he had no interceptions in the game, his only touchdown of the day was an objectively bad throw: he under-threw the ball across the field, into coverage, while being hit. Luckily, Spencer Webb bailed him out with a brilliant catch and score. If the coaches call that a success, then Herbert will make that throw again, and the result probably won’t find its way onto a pro-Oregon highlight reel.

Prior to the game starting, three Oregon receivers — including Juwan Johnson, which made for a nervous fanbase — took the field in grey sweatpants and ordinary shoes. Luckily, the Oregon wideouts put together a performance that was arguably better than any last season. Eight different players caught at least one pass; four players caught three or more.

However, despite 242 receiving yards, the team’s longest single reception was 47 yards. Most of the passes were for short yardage, due to trouble getting yards after the catch. With the exception of the 47-yard completion and a couple of screen passes, receivers weren’t able to add many yards after catching the ball. 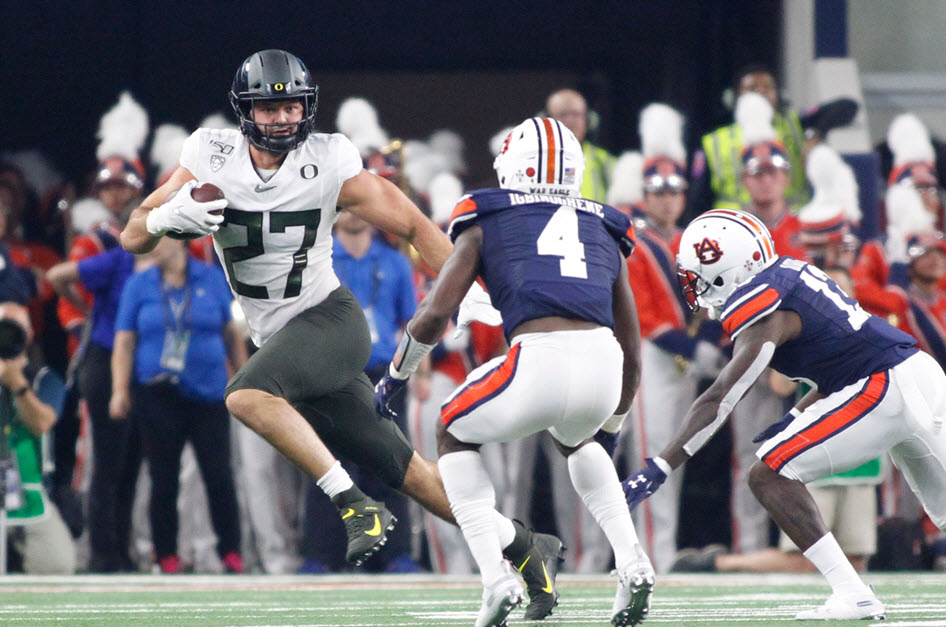 Jacob Breeland attempts to run after a catch against Auburn.

Two hundred and forty-three days of preparation, and Oregon couldn’t run the first play of the game without calling a timeout. The Ducks scored on their first drive, but they also spent a valuable timeout seven seconds in to the game. And the plague of offensive blunders had just begun.

In the second quarter, the Oregon defense made an impressive stand near midfield, and Jevon Holland made a tremendous punt return to the Auburn 9. Then, on the ensuing first and goal, Herbert managed to fumble the ball away on a fake handoff with no defenders in the area. Auburn ran it all the way back to the Oregon 3, with Bryan Addison managing to prevent a scoop six with an eleventh-hour tackle. Oregon was fortunate that the defense stood tall again and held Auburn to a field goal.

But the offense and the staff weren’t done sabotaging the game yet.

In the fourth quarter, on third and seven from the Oregon 22, with a four-year starter at quarterback, an offensive line boasting more starts and as much talent as any line in the country, and a corps of receivers that had been playing extremely well to that point, the coaching staff elected to “surprise” Auburn with a run play up the middle. After a two-yard gain, Oregon punted.

And then came the coup de grâce.

With 5:30 to go, Oregon had the ball on fourth and one at the Auburn 41 yard-line. Herbert stayed down after getting hit on the previous play, so he had to sit out one play per NCAA rules. Tyler Shough came into the game to replace him. Then, Mario Cristobal called a timeout prior to the play. After the timeout, he tried to send Herbert back on the field with the offense. A referee noticed, sent him back off again, and Cristobal called a second timeout — his last — before running the play.

Everyone knew that the strongest part of Oregon’s line was the left tackle and left guard. The TV announcers even mentioned it. Apparently, it was no secret to Auburn, either, because when Verdell ran off the left tackle, he ran straight into five Auburn defenders, who easily stopped him for no gain. Oregon turned the ball over on downs, wasting their best chance to score and run down the clock.

One would have hoped the staff would be better prepared this time around. Marcus Arroyo had 243 days to get the Oregon offense ready to face Auburn. His offense returned all five offensive linemen, both leading rushers, and a superstar quarterback, and still could only muster 21 points. The team was plagued by poor rushing performance, poor passing performance, abysmal game management, and mental mistakes at the worst possible times.

The Ducks have 11 more games, but only seven days to prepare for the next one.

Will that be enough to beat Nevada?