The desert hasn’t been kind to Oregon recently, and it was more of the same on Saturday, as the Sun Devils pulled off a stunner, defeating the sixth-ranked Ducks 31-28. It was a wild game, full of highlight-reel plays, game-changing twists and plenty of drama. But in the end, the Ducks were on the losing end of college football’s most recent jaw-dropping upset.

How Arizona State Shocked the Ducks

Arizona State came into Saturday’s game with little-to-no momentum. After coming out of the gate hot, starting the season 5-1, the Sun Devils lost their next four games. They entered their match-up against Oregon at a pedestrian 5-5, having suffered recent losses to typical Pac-12 bottom dwellers UCLA and Oregon State.

Meanwhile, Oregon entered the match-up as winners of nine straight, most recently handling the Sun Devils’ in-state rivals Arizona with relative ease. This clearly looked to be a case of two teams trending in opposite directions. The Ducks were essentially a Pac-12 title away from earning a playoff berth, and Arizona State was a couple of losses away from one of the worst in-season collapses in recent memory.

But the games aren’t played on paper. 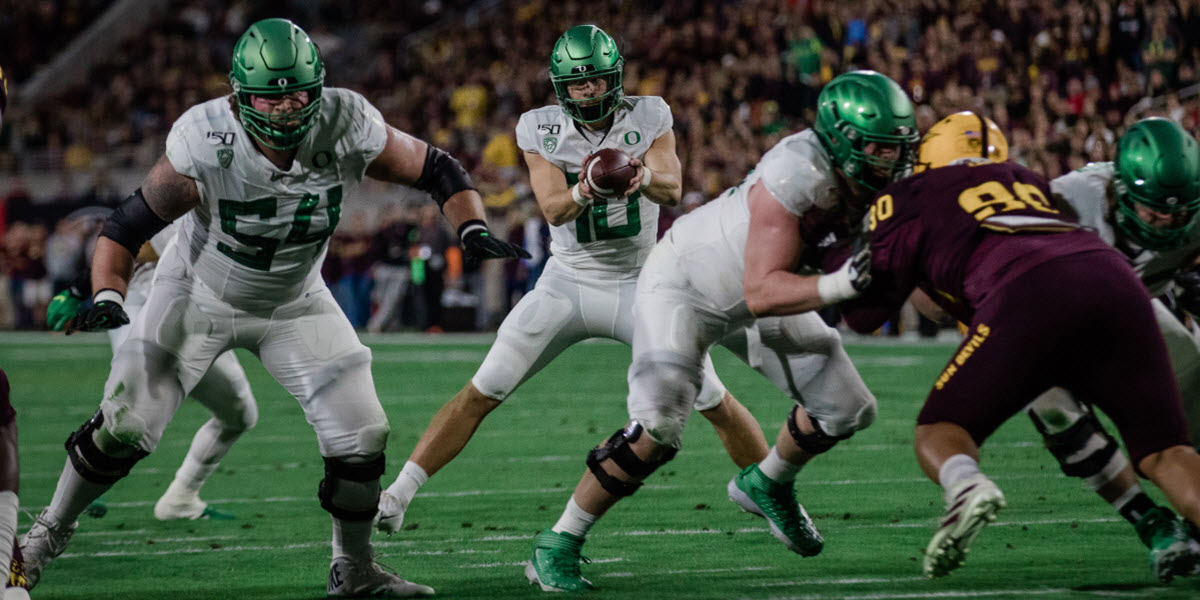 The line of scrimmage versus ASU…

The Sun Devils looked like the playoff-contending team for the majority of the game, as they stifled an Oregon offense that had started to find its way in recent weeks. Oregon quarterback Justin Herbert was on a fast track to a career-worst outing until the waning moments of the contest. He tossed a couple of bad interceptions and struggled with his accuracy throughout the game. Every time the Oregon offense started to get into rhythm behind a dominant rushing attack (Oregon finished with 154 rushing yards and 5.5 yards per attempt), the passing game would sputter, causing the drive to stall.

But it wasn’t just a matter of Herbert struggling. The Arizona State secondary was magnificent. The Devils’ defensive backs blanketed the Oregon receivers all night long with physical man-to-man coverage; open throwing lanes were few and far between. It was a wonder that they only had two interceptions, as a handful of other errant or contested passes found their way into the hands of unsuspecting Sun Devil defenders who were unable to make Herbert and the Ducks pay.

Overall, Oregon’s offense was a non-factor, save for the Ducks’ late-game rally. Despite one of the best performances by Oregon’s ballyhooed offensive line all season, a suffocating Arizona State secondary and an unsettled Herbert held the Ducks to a mere seven points for the majority of the game. 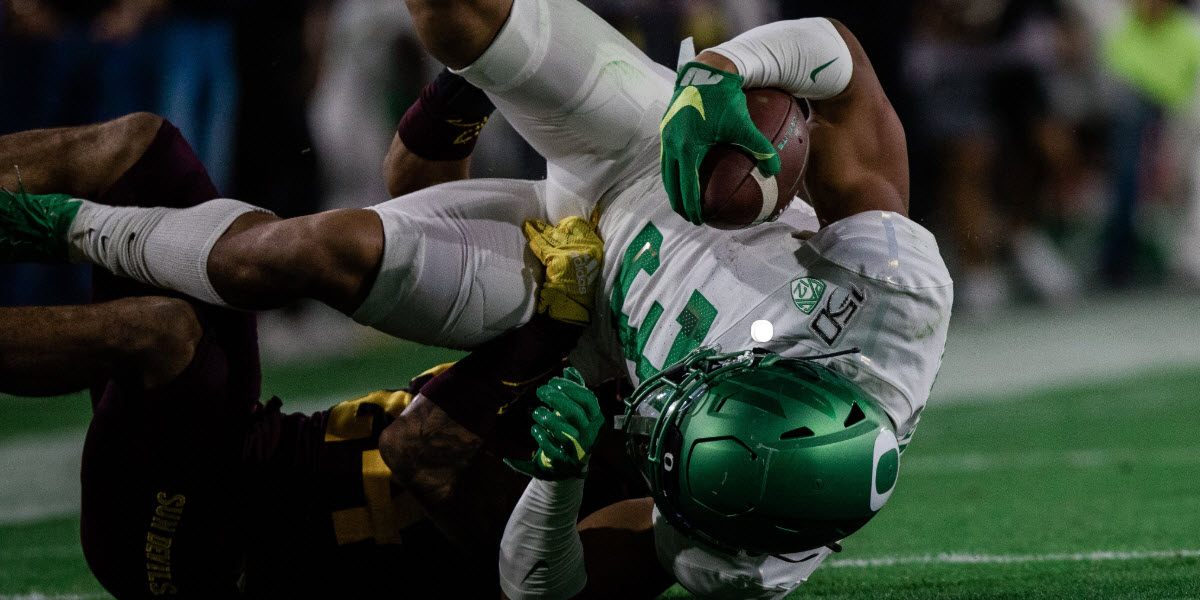 The ASU defense was tough on the Ducks…

But as shocking as it was to see Oregon’s offense struggle, it wasn’t the first time that the Ducks have had issues on that side of the ball. The more surprising takeaway from Saturday’s game was how easily Arizona State, with a true freshman quarterback, was able to move the ball against a highly rated Oregon defense.

Jayden Daniels ended up looking like the first-round NFL Draft prospect in the match-up. He displayed poise beyond his years, gashing the Ducks’ defense like no other quarterback has this season. He wasn’t afraid to test a supposed elite secondary down the field, and when he took his shots, he was deadly accurate. He finished with a staggering 418 yards through the air and 3 touchdowns.

And even though the Ducks contained Arizona State’s slippery tailback Eno Benjamin for the most part, he still churned out timely first downs and did some damage in the passing game, too. He finished with over 150 yards from scrimmage, slowly wearing down the Oregon defense. Mario Cristobal realized early on that he had a battle on his hands.

For three and a half quarters, the game was a blowout. Arizona State was clearly the better team, and Oregon was lucky to be within three possessions of the upset-minded Devils. Daniels wasted no time going to work after Oregon jumped out to a 7-0 lead. He launched a 57-yard bomb to receiver Frank Darby, who absolutely shook one of the Ducks’ best defenders, Jevon Holland, out of his shoes with a filthy double move.

He followed that up with another beauty: a 26-yard rainbow, once again to Darby, this time after the first of Herbert’s two interceptions. A two point conversion by Benjamin, and a field goal following Herbert’s second interception all but assured Oregon’s doom. The Ducks trailed 24-7 with just 8:42 left in the fourth quarter.

A Comeback for the Ages (Almost)

Oregon had been thoroughly outplayed for most of the game, but for the final 8:42, it was Arizona State that had to hold on for dear life.

In a flash, the Ducks’ offense came to life, behind resurgent play from Herbert and a career day for receiver Johnny Johnson III. The much maligned playmaker silenced the doubters on Saturday with a ridiculous effort that very nearly led the Ducks to an improbable victory. He had 10 receptions for 207 yards and 2 touchdowns. He was the key factor in Oregon’s near-miracle finish, weaving his way through the defense on numerous screen passes and hauling in downfield throws from Herbert.

Even the Ducks’ defense made a critical stop during crunch time, giving the ball back to an all-of-the-sudden electric Oregon offense. The Ducks took advantage and scored two touchdowns in just over three minutes. In a wild change of events, the game was 24-21 with Arizona State suddenly feeling the pressure. Johnny Johnson had a MONSTER game for the Ducks.

But Daniels didn’t flinch. Facing a third-and-16 situation, Daniels threw his best pass of the night: an 81-yard touchdown to star receiver Brandon Aiyuk in what ended up being the dagger. The play absolutely deflated an Oregon bench that was starting to believe that it could somehow — despite a very disappointing performance — find a way to keep its playoff hopes alive. While the offense kept swinging, scoring with just over two minutes to go, a failed onside kick sealed Oregon’s fate.

The Ducks showed heart in their comeback effort, but they dug far too deep of a hole for themselves. Oregon had flirted with disaster numerous times throughout the season and had found a way to pull out a handful of close games. Unfortunately, on Saturday, many of the issues that the Ducks were able to overcome before proved to be too troublesome this time around.

From here, Oregon will have to lick its wounds and get off the mat. The Ducks still have plenty to play for, with a Rose Bowl berth and a Pac-12 title still on the table. But we can safely shelve the playoff talk thanks to another doomed trip to the desert.