Last weekend the Oregon Ducks demolished USC 56-24 on the Trojans’ hollowed turf, but the game was not the classic that it could have been. Coach Mario Cristobal’s team rang up 12 penalties, 10 of which were personal fouls for a total of 157 yards. You could describe some of these fouls, particularly two on Troy Dye, as deliberate and dirty.

Justin Herbert and the Duck offense got off to a miserable start and the USC air raid offense clicked early, but the defense, learning valuable lessons last week against Washington State, shut down USC’s freshman quarterback Kedon Slovis and the most explosive group of wide receivers in the conference.

The Duck defense allowed the same number of receptions (32) to the Trojans that it did to WSU, but allowed 150 less passing yards and no reception longer than 20 yards. Trojan receivers were continually frustrated in their efforts to run after the catch.

On Herbert’s first pass play, which was called on a long-yardage situation, the Trojans (above) brought a zone blitz that resulted in a sack. Every offensive lineman was covered by a defender, so there was no help for the center, Jake Hanson (No. 55), who was not quick enough to cut off the rusher over him. Herbert wanted to dump the ball to Jaylon Redd (No. 30), but the defensive end that rushed a few steps at left tackle Penei Sewell (No. 58) dropped back in zone coverage and nullified Herbert’s intention.

This was an excellent blitz in a passing situation and the Duck offense is not used to dealing with it. Herbert did a good job holding off his intended throw, which would have been intercepted. This is where taking a sack is better than taking a chance on a risky throw, especially deep in your own territory.

This is a similar rush (above) to the first clip. The defender to the right of Hanson (No. 55) again is too quick for him to cut off; he also ties up the right guard who collides with Hanson. The right tackle has a man, but the defensive end loops around the pile and comes free.

The pressure bothered Herbert, who is making the right decision to throw to Redd (No. 30), but he leads him instead of just relaxing and throwing directly at his receiver. By leading Redd, Herbert throws at the defender, not the hole in the coverage where his receiver had throttled down.

While this was only Herbert’s second interception of the year, every team left on the schedule will dial up this blitz in a passing situation, believing two things: (1) that Herbert can be rattled; and (2) the offensive line has trouble with pass stunts and blitzes. This was also a problem against Washington State.

As they had done earlier, USC (above) is attempting to bring four rushers against three in the middle (guard, center, guard), but this time, the Ducks made a heady adjustment: having RB CJ Verdell  (No. 7) check the middle before releasing downfield. In this case he gets there just in time to eliminate an unblocked rusher who would have sacked Herbert.

Having solid protection, Herbert is able to set and get his body into the throw and hit Juwan Johnson (No. 6) with a perfect strike and Oregon’s only first down in the opening quarter.

On this play above, Herbert is responsible for getting himself sacked. After receiving the snap, he drifts 2-3 yards to his left, which he might get away with at other times, but not today. At the same time, left tackle Penei Sewell has an off-balance rusher whose pad level is much lower than his, which prevents him from getting leverage on the block. To compound things, Sewell’s pad level is too high and his feet are too close together, limiting his athletic advantage.

Nevertheless, if Herbert had remained right behind the center, Sewell would have put the USC rusher on the ground outside and deeper than his quarterback, giving him room to step up in the pocket. Of note, on Herbert’s first nine passes, he completed three, had one intercepted, and was sacked two times — hardly a good start for a first round NFL draft prospect.

Above, Deommodore Lenoir (No. 6) intercepts Slovis’ pass and returns it 45 yards to set up Oregon’s sixth touchdown. The Ducks got a good pass rush for starters, and safety Brady Breeze (No. 25) jolts the USC receiver who falls down right before the pass is released. Lenoir has his eyes on the quarterback, breaks on the ball and makes an exceptional catch and even better return.

Notice the downfield blocking of the other Duck defenders. Safety Jevon Holland (No. 8) in particular makes an obvious effort to avoid a crack-back block, throwing his hands up to show no malicious intent. This is being coached now nationwide, as efforts to eliminate unnecessary physical contact without compromising the block are more commonplace.

The television commentator cried about illegal contact from Breeze on the above play, but as long as the receiver is in front of the defender and the ball has not been thrown, it is considered still a running play and the defender can treat the receiver as a blocker. Once the ball is in the air, all defenders have to play the ball and not the man. 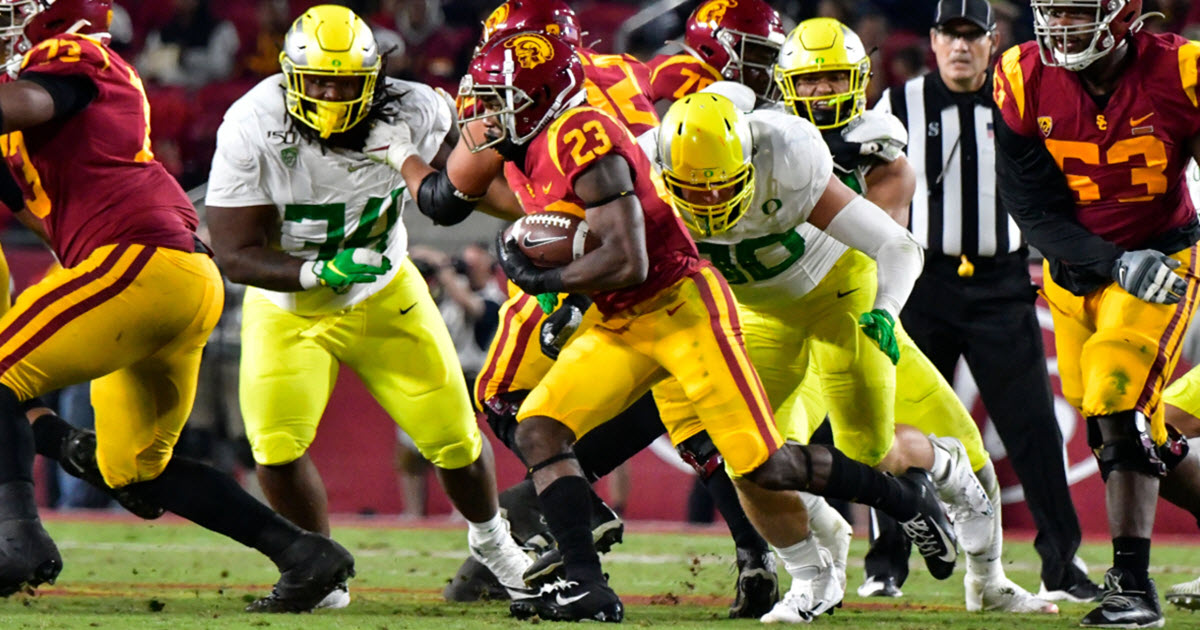 The turnovers created by the Oregon defense changed the game …

Oregon’s defense forced four Trojan turnovers, including two in the red zone, while the offense only gave away the ball once. After a poor start, the offense scored touchdowns on their last eight possessions to win going away. Mykael Wright’s 100-yard kickoff return with eight seconds to go in the half after USC narrowed the score to 21-17 was the back-breaker, compounded after the Ducks scored their first possession of the second half. The Trojans were done like dinner after that.

A bye week to work on picking up pass rush stunts and blitzes, as well as generally keeping one’s poise, should be on Cristobal’s practice priority list. The Ducks have rounded the clubhouse turn and are headed down the stretch. A fun November lies ahead.