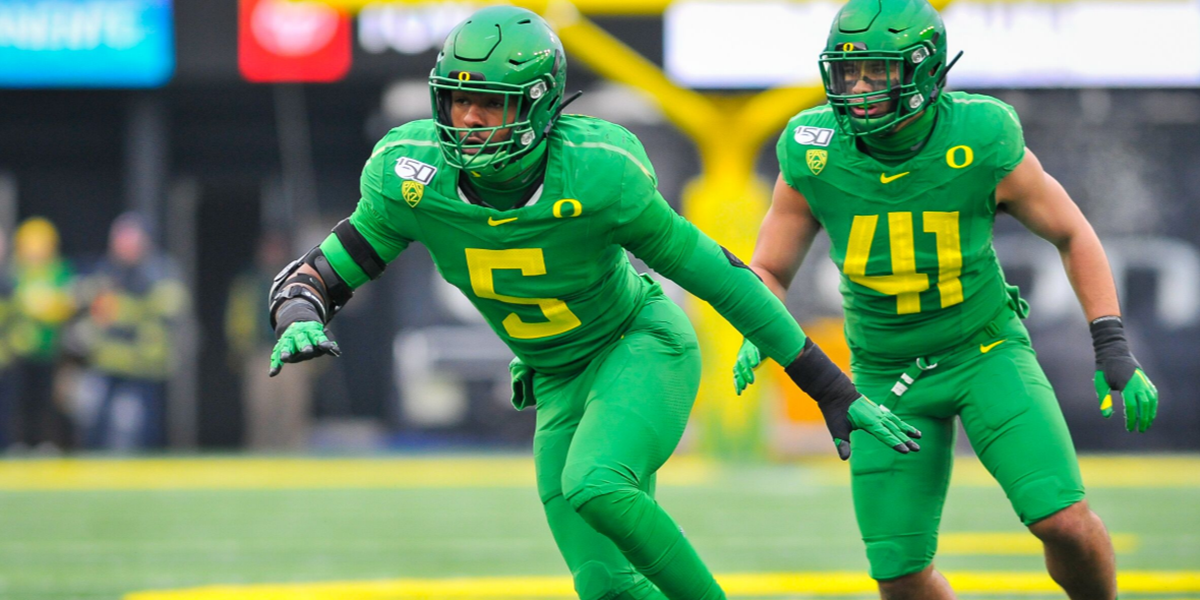 It’s a beautiful thing when elite talent meets proper technique. That’s what’s happening with Oregon’s all-world freshman pass rusher Kayvon Thibodeaux as the season nears its end. After a relatively quiet start to the season, Thibodeaux has emerged as Oregon’s best pass rusher, leading the team in tackles for loss and sacks.

Thibodeaux’s physical attributes (size, length, athleticism, etc.) have never been in question, but often times it takes a while for incoming freshmen with such an athletic advantage to learn the nuance necessary to be successful at the collegiate level. It’s easy to win with pure speed and power in high school, as most five-star prospects are on a different talent level than their competition. While Thibodeaux still has an edge over most of his collegiate counterparts in speed, strength and length, the gap is much smaller. That’s where technique comes into play.

Thibodeaux is starting to master the intricacies of his position, which is making him darn near unblockable. In last week’s slugfest against a scrappy Oregon State squad, Thibodeaux wreaked havoc on the Beavers’ offensive line all game long. He finished with a sack and two tackles for loss, but perhaps his most impressive play was one that he didn’t get credit for on the stat sheet. 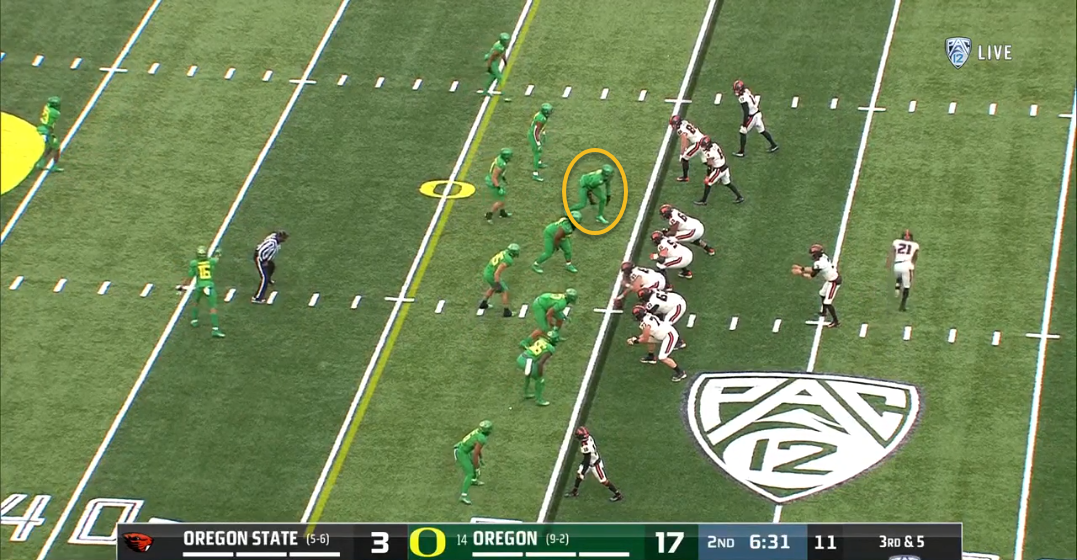 Above, it’s third and five for the Beavers — an obvious passing situation. After some initial movement by Oregon’s defensive front, Thibodeaux (circled above) lines up on the outside shoulder of the Beavers’ right tackle. With four wide receivers and a running back motioning out of the backfield, Thibodeaux knows that he has a one-on-one matchup with the tackle.

While many young players would use a simple speed or bull rush in this situation (essentially relying on their athleticism to win the matchup), Thibodeaux uses to a tried-and-true technique that demonstrates his maturity at the position: the rip move. 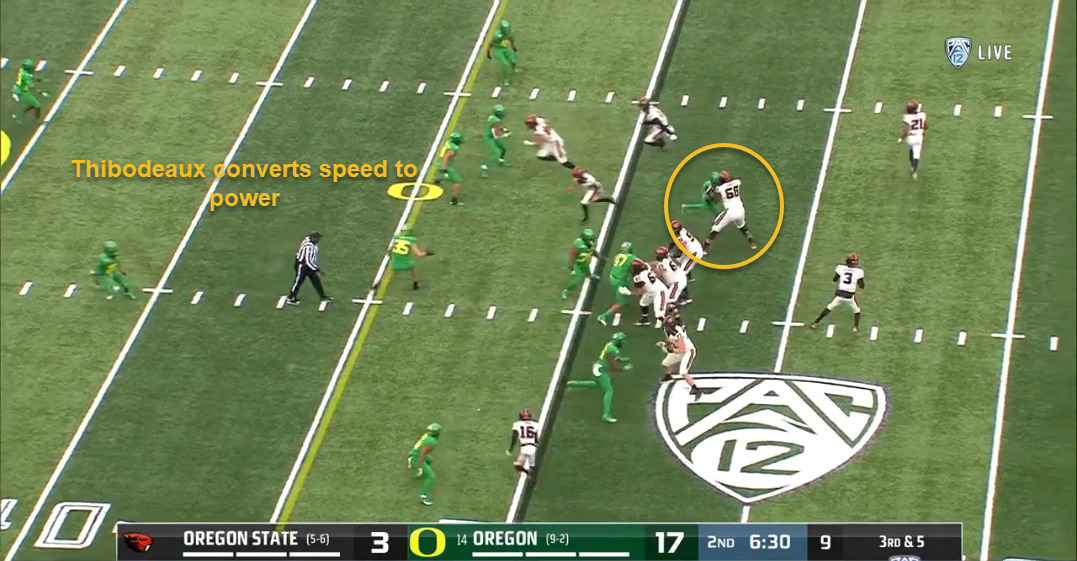 To start, Thibodeaux gets a terrific jump off the line of scrimmage, utilizing his ridiculous explosion and long strides. But instead of trying to turn the corner, he converts his speed into power (above) by engaging with the Beavers’ offensive tackle and pushing him backwards. This initial “punch” is critical in establishing leverage — a term  coaches throw around often. By generating enough power, Thibodeaux gets underneath the pads of the offensive tackle, allowing him to set up the rip. 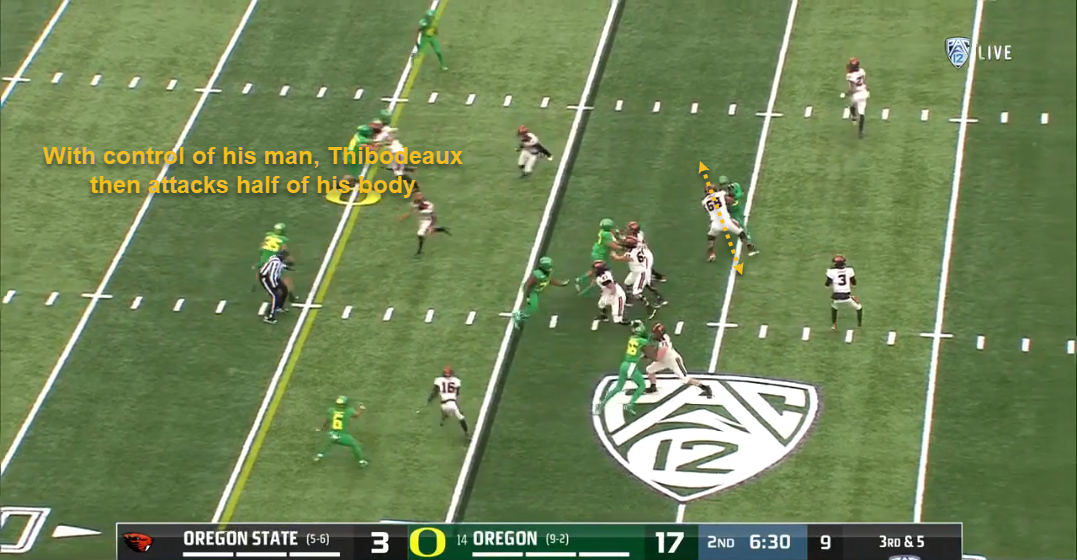 Thibodeaux attacks half of his man.

Because Thibodeaux has leverage over his man, he is able to situate his own body so that he is positioned on the lineman’s outside half (note the yellow arrow dividing the offensive tackle above). In other words, Thibodeaux sets himself up so that he only has to get past half of the lineman rather than his whole body. 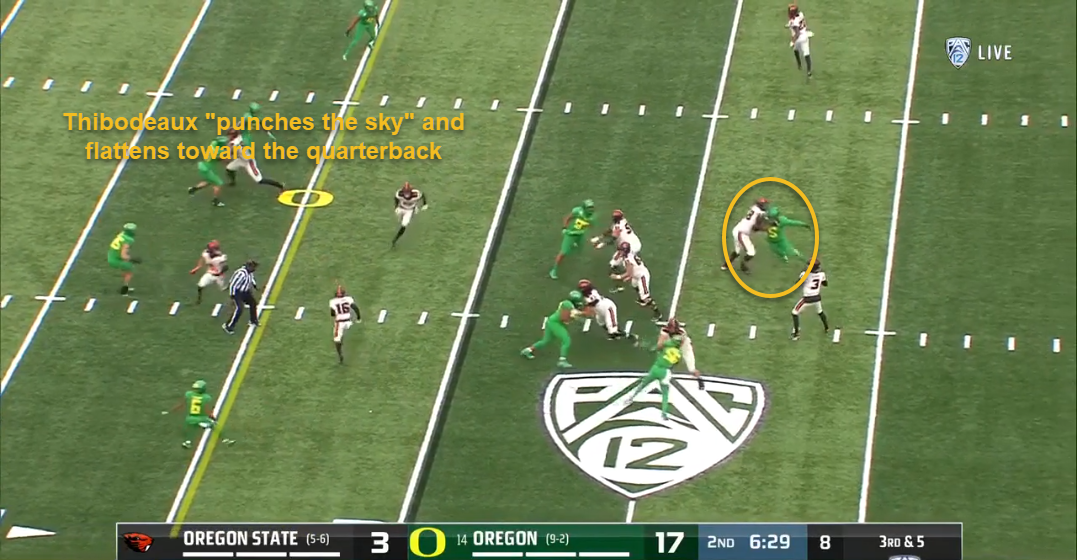 With his outside arm free and a clear positional advantage over his opponent, Thibodeaux executes the rip (above). Pass rushers are taught to “punch the sky” with their inside arm in a powerful move that disengages the pass rusher from the lineman. At the same time, the pass rusher must turn the corner with speed and balance, “flattening” himself towards the quarterback.

This last step is critical and extremely difficult. Plenty of pass rushers have the power to get leverage and execute the rip. But few have the hip flexion and agility to turn the corner and not overrun the quarterback. Luckily, Thibodeaux is an elite athlete, and his natural gifts allow him to turn the corner in textbook fashion. Thibodeaux forces a third down stop.

Thibodeaux doesn’t make the sack, as the Beavers’ quarterback does a nice job of avoiding the pressure (above). But Thibodeaux beats his man so badly that the quarterback has to run clear into the rest of the Oregon defensive line, which promptly brings him down well short of the line to gain.

This play is an example of how Thibodeaux is starting to win with both his athleticism and his smarts. He’s putting together a complete tool set of pass rush moves that, along with his freakish talent, will make him a force to be reckoned with for years to come.